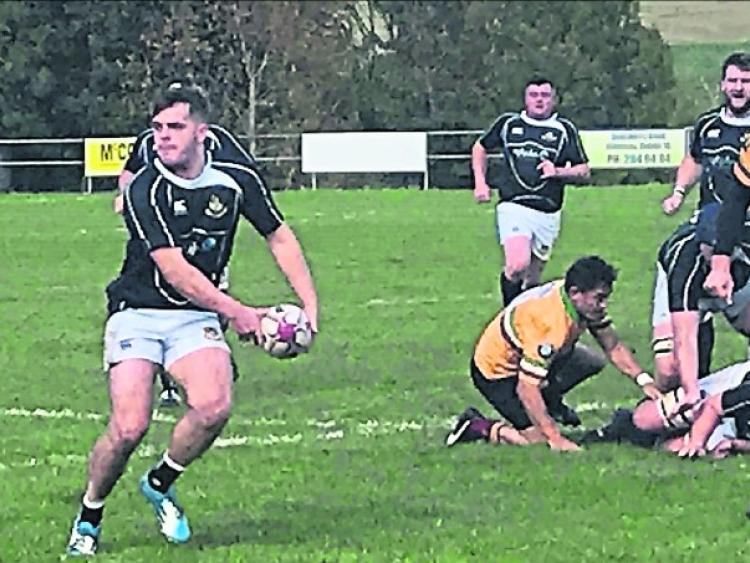 Both sides scored five tries but it was Longford who eventually ground out their third away of the season and also maintained their winning start to the league securing their fourth victory from four matches.

Like the week before the match started badly for Longford when they conceded an early try after five minutes to fall behind 5-0.  Longford struck back quickly with a well worked try by wing Joe McGowan to draw back the score to 5-5.

DLSP are a very enterprising side who play a dynamic offloading game and try to get the ball out to the wings at every opportunity.  It became clear on 16 minutes that for Longford to come away with a win that they would have to at least match their opponents in the try scoring stakes.

DLSP were next to score with a well worked try out wide to put them 10-5 in the lead.  However, Longford continued to hold their own against their fast moving opponents and it was Benny McManus who crashed over for Longford’s second try to put the visitors into the lead for the first time 10-12.

DLSP continued their offloading game and moving the point of contact.  However, Longford continued to deal with nearly everything that was thrown at them.  Conversely, they will be disappointed about their amount of missed tackles compared to their first three matches.  The pressure they exerted eventually told just before half-time when they went in for their third try to leave the score 15-12.

The second half started with a bang with both sides going for the jugular.  Longford clearly were galvanised by the half-time talk as their tackling, carrying and rucking markedly improved in the second half.

Longford struck first via the boot of Ryan McHugh to leave the sides all square; 15-15.  This was even though Longford were down to 14 men after having a man sent to the bin subsequent to some argy bargy.

For the first time this year Longford ended up on the wrong side of the score while being down to 14 men with DLSP running in their first converted try of the match to retake the lead 22-15.  However, the yellow card seemed to buck Longford into action as they brought their game to DLSP for the rest of the match.

Firstly, flanker Kieran O’Gorman crashed over for a converted try to draw Longford level again, 22-22.  This was followed up a second try from Benny McManus after a sustained barrage on the home side’s line to take the lead 22-29 and secure Longford a four try bonus point at minimum.

DLSP kept coming at Longford but their offloading type of rugby proved their undoing as substitute Ian McCormack was the first to react to a knock on by DLSP and raced away from the home defence to score Longford’s fifth try and stretch their lead out to 12 points; 22-34.  What was remarkable was that it was McCormack’s third try of the day, having ran in two tries for the Second XV in the early game.

DLSP kept coming at Longford and cut through for a another try to draw the score back to 29-34 with 5 minutes to go.  DLSP were clearly pushing to try and win the match. However, Longford secured the ball and never relinquished it with a Munster style pick and carry close out that only could have impressed head coach, Glenn Baskett.

The Leinster League takes a break next weekend. Longford are in a great position after four games; securing four wins, including three away wins and two bonus points to lie second in the league, two points behind leaders Suttonians, who we have yet to play.

Next up is one of our perennially tough opponents, Tullow who travel to CPL Park on Sunday November 4th, kick-offs moved back half an hour in November.  Second XV matches kick-off at 1pm and First XV matches at 2.30 PM. We would appreciate your support for a great squad who are training hard to be in the running for league honours at the end of the season.