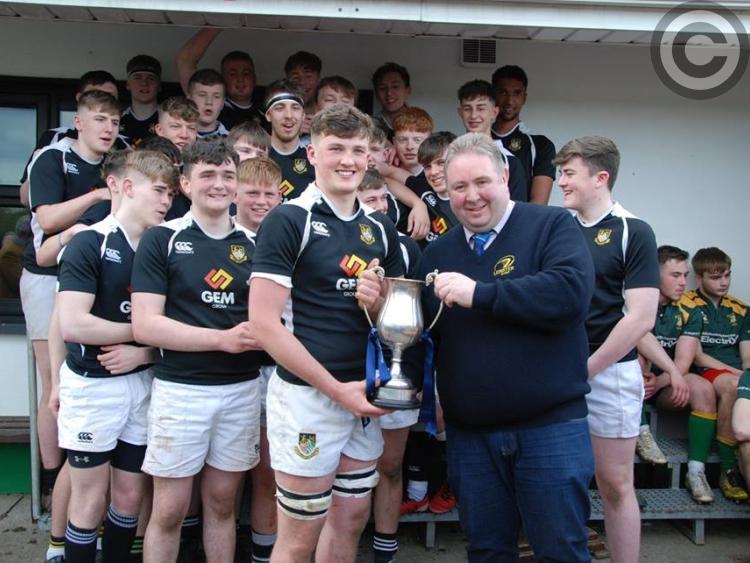 A proud moment for Longford Rugby Club U-18 captain Packie Molloy as he receives the Darcy Cup following the great win over Boyne (Louth) in the Leinster Cup Final at Naas RFC on Saturday last.

Leinster Darcy Cup champions has a nice ring to it and the manner in which it was achieved will live long in the memories of the big crowd who witnessed this classic at Naas RFC on Saturday last.

The Longford lads have come from “no hopers”, losing six games on the bounce before the Christmas break to league and cup double winners suffering only one narrow defeat in the last 12 games. Boyne were worthy finalists and came so close to lifting the silverware before it was snatched from their hands in the closing moments.

The men in black love playing on top of the ground and with a dry ball and that’s what they got. The early stages of the match were a real “getting to know you” type of encounter with both teams testing for any areas of weakness.

Boyne sent their big men carrying close in before moving wide but the Longford defence proved considerably more watertight than the previous week and stood firm. Longford started to get their passing game together and but for slight communication errors might have put Shane Farrell through in the middle. The pressure told with the Louth side conceding a penalty which was slotted over by Ryan McHugh to put Longford up by 3.

Boyne responded and had a couple of long range penalties wide before they levelled matters with a good strike. Longford were next to create pressure and some excellent handling released Shane Farrell who raced towards the line before passing to the supporting Liam Harte. He was unlucky to have the ball stripped  just metres from the line and the opportunity was gone.

Boyne were reduced to 14 shortly after when under pressure, they slapped the ball into touch and Longford would have expected to dominate the sin bin period. This wasn’t the case though and a couple of poor penalties followed by missed tackles allowed Boyne deep into the Longford territory.

Pick and go’s and one out runners hammered at the back line before it gave way with the conversion putting the Louth lads into a 7 point lead while they had also bagged the important first try. They saw out the remainder of the bin period without too much fuss and the half-time whistle gave both teams a chance to catch their breath.

Longford returned with the sizeable hill advantage but a breeze had picked up and was blowing into their faces. The Longford backs looked threatening in the first half while the always willing forward carriers were well marshalled by the impressive Boyne pack with their 8 having a massive influence on the game.

The game plan was to move the ball more quickly away from their pack and this paid off shortly after half-time when the Kenagh rocket, Shane Farrell got the ball in a small bit of space and burned all and sundry to score a try  Ryan McHugh struck a lovely conversion from out on the right to level the scores.

Boyne responded and kicked a penalty into the Longford 22. Their maul was a major weapon all day and they appeared to be set for another but ran a dummy play that caught the Longford lads unawares and they were in for another 5 pointer. The conversion was wide but it now appeared as if Longford were facing an uphill battle.

Boyne had another great chance when their mobile second row broke through the line and Paul Smith took a card for the team for playing the ball illegally following a great tackle. The resulting penalty hit the post, bounced off the other post and the crossbar before bouncing back into the field of play and was cleared to the huge relief of the Longford supporters.

Longford were next to rue luck when Paddy Duggan, who was everywhere, moved the ball wide to Farrell again who put in a fine kick ahead. The ball took a bad bounce just as it looked as if Longford were in again and the Boyne lads cleared their lines well.

Time was running out with only three minutes remaining plus whatever the referee added. Longford were down to 14 again, this time for an offence that wasn’t really clear.

The pack set a great target with some good carries and the ball was moved sweetly finding its way to that man Shane Farrell again. He had lots to do and was tight to the right wing but he swerved in and then out again beating the last despairing dive and had the presence of mind to bring the ball closer to the posts.

The Longford crowd went wild while there was stunned silence on the Boyne side but most didn’t realise that the conversion was crucial as a drawn game would have seen the Louth team collect the cup as the result would go to the unsatisfactory first try rule.

We needn’t have worried. Up stepped Ryan McHugh to kick a conversion that will always be remembered. 15 metres from the right touchline, 25 metres out, right foot with the wind coming from the right but he stuck it true and it curled inside the left post.

There was still time for the Boyne lads and they made us sweat. Longford were awarded a scrum and went through a couple of phases but the ball was turned over and they attacked up the left only for the ball to be knocked on followed by the sweet sound of the final whistle.

Joy and disappointment were on display in equal measures and you couldn’t but feel sympathy for the brave Boyne lads who gave everything in the fight for the title.

So up the Longford lads went to collect their second cup this season but much more sought after piece of silverware led by their mighty Captain Packie Molloy. The lads received their medals before the Darcy Cup was hoisted high and the celebrations began. A memorable day that will be talked about for many years.

Thank you to our hosts Naas Rugby Club, to our referee and assistants for doing a fine job, to John Treacy and Scott Ennis for all their hard work and especially to our fabulous support from the club and parents and friends.