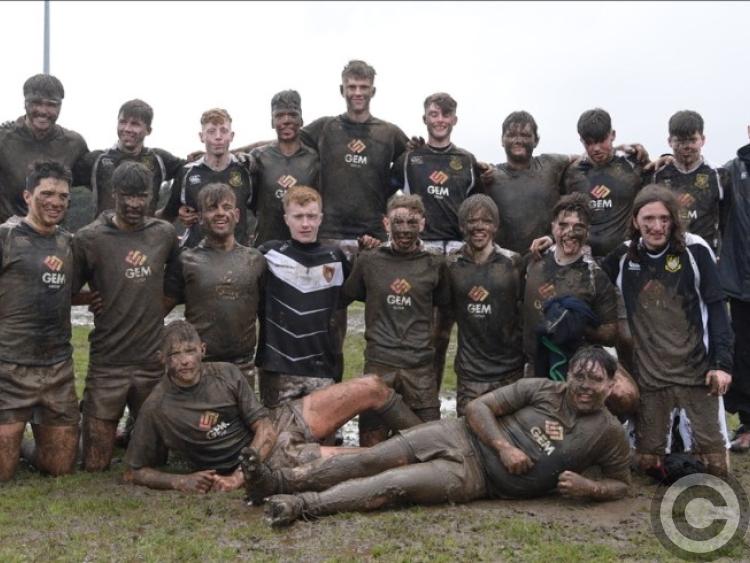 It was a perfect day in Longford when the under 17’s left for St Mary’s College, Terenure for the Leinster League Division 2 final against Newbridge on Sunday last but they arrived in Dublin to a cold miserable wet morning.

The pitches were in dreadful condition (in stark contrast to Longford’s 2 all weather pitches) and the Leinster referee had a difficult decision as to whether the match could proceed but it eventually went ahead.

Longford kicked-off and the forwards quickly dominated the breakdown.  Their intensity paid off with frequent turnovers and they hammered the Newbridge pack with multiple phase plays with strong carries from Craig Gorman, Gareth O’Hara, Finn Brady and Ciaran McGlynn.  They were rewarded when Gareth picked from a ruck in the Newbridge half, broke several tackles and rounded the Newbridge defense to touchdown in the corner. The conversion was narrowly missed by Simon Moorehead.

Longford continued their dominance and secured a penalty 10 metres  from The Newbridge line. Daniel Reilly quickly tapped the ball and powered through three defenders to touch down 5 metres  from the corner flag. Simon’s conversion split the posts in one of his best kicks this season.

Try no 3 came from the agile feet of Dario Castiglianni when he dodged through the Newbridge defensive line and brushed off tackles as he secured the touchdown. Simon again made the difficult conversion to bring the score to 19-0

It was Ciaran McGlynn who next stole the limelight when he was rewarded for his hard tackles and many carries when he touched down 5 minutes before half-time.  Simon again converted to bring the score to 26-0 to Longford.

In the second half, Longford’s talisman Gareth O’Hara added to the tally when he broke clear of the Newbridge pack and sprinted  half the pitch to touch down in the corner. Simon narrowly missed the conversion with the score now extended to 31-0.

Fair play to Newbridge, they did not lose heart and they came back hard at Longford.  They scored three tries in the second half and only for heroic tackling from Ciaran McGlynn, Gareth O’ Hara, Dean Norton and Dave Connolly the result could have been closer.  The coaches asked for each player to give his best and they got it.