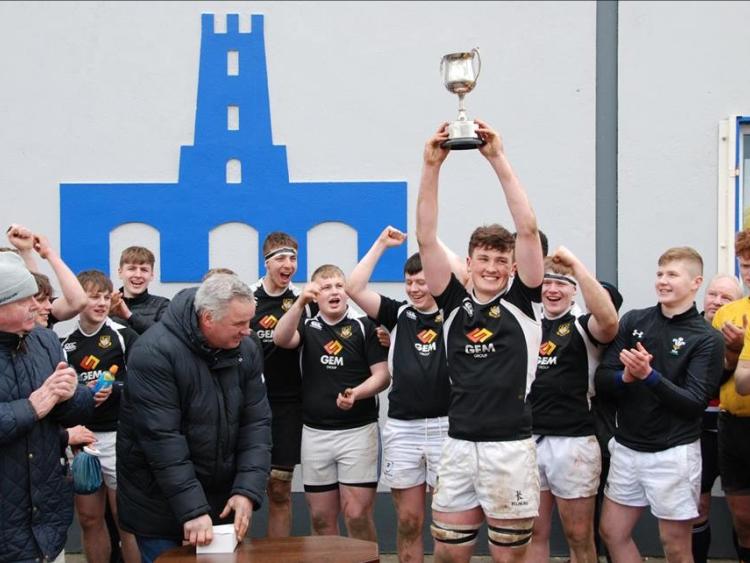 Athy has not been a happy hunting ground for this Longford squad with defeats at that venue in the league semi-final last year and the plate final the year before. There was certainly a nervousness about the display that wasn’t evident in the earlier rounds of the league but it all worked out well in a great win over Ashbourne in the Leinster League U-18 Division 1 Final on Saturday last.

The squad assembled early for the journey and there was some relief that Liam Harte and Niall Derham had recovered from illness, though we lost Ronan Bleakley to injury. Conditions on arrival were surprisingly good with a slight breeze increasing the wind chill but with a nice dry surface.

Longford knew what to expect from the Ashbourne men having suffered a narrow 3 point defeat at the Meath venue  in January and the significantly bigger opposition went about their work as expected, sending their hard running men around the fringes. The Longford men were stretched on a number of occasions and last gasp defence was needed to keep the Ashbourne team out.

The men in black gradually found their way into the game. The nervousness was evidenced by playing a little narrow with willing forward runners taking the ball on when it might have been wiser to go wide.

They managed to get some good field position and an infringement by the Meath side allowed Ryan McHugh open the scoring with a well struck penalty. Failure to control the play from the restart allowed Ashbourne gain territory and they were awarded a penalty for not releasing which resulted in 3 points to level the scores.

The restart caused consternation in the Longford ranks when the Ashbourne 8 gathered and raced through some ineffective tackling, He was slowed down and the Longford defence managed to reset just in time.

The Ashbourne back 3 kicked ahead in the hope of putting pressure in Longford territory but instead they were cut open for a wonderful try. Shane Farrell gathered and beat three men releasing the ball to Paddy Duggan. He weaved his way through another couple of tackles before passing to captain Packie Molloy. Dylan Smith was on his shoulder and he looked like he could get in himself but fed the prolific Paul Smith to get over the line wide out. This was a try worthy of any stage. The conversion was missed but Longford led 8-3.

Ashbourne had a slight territory advantage for the remainder of the first  half but their only other scoring chance came from a speculative shot on goal from near half way. Longford suffered a significant injury with the influential Daire O’Brien going down shortly before the half-time whistle.

The second half resumed with Longford having the advantage of the elements. The story of the half was all about Longford pressure and outstanding Ashbourne defence. The men in black spent 25 of the 35 minutes camped in the 22 but excellent defence and some over eagerness meant that the line wasn’t crossed.

Longford looked comfortable deep in the Ashbourne territory but 5 points looked a slender lead. The Meath side  turned over the ball and attacked, were awarded a penalty which was kicked into the 22.

Longford’s defence stood firm and a great steal by Terence Hegarty saw the backs move the ball crisply to Paul Smith. He kicked ahead but was hit late, resulting in a penalty on the Ashbourne 22. Ryan McHugh was coolness personified and slotted the ball over the bar to push the lead out to two scores, 11 – 3. Longford managed the remaining few minutes without much drama before the final whistle brought a conclusion to a hard fought and nerve shredding final.

Longford captain Packie Molloy collected the cup on behalf of his squad and certainly deserved the honour having played a central part in the victory. This was not a vintage display by the squad but finals are all about the result. There were many fine performances on the day but Paddy Duggan was once again at the centre of everything.

We wish to thank all the parents for travelling to support the lads. It made a difference. We also wish to thank Athy Rugby Club for their hospitality and the excellent officiating panel.

Longford refocus now with a Leinster Cup quarter-final ahead.