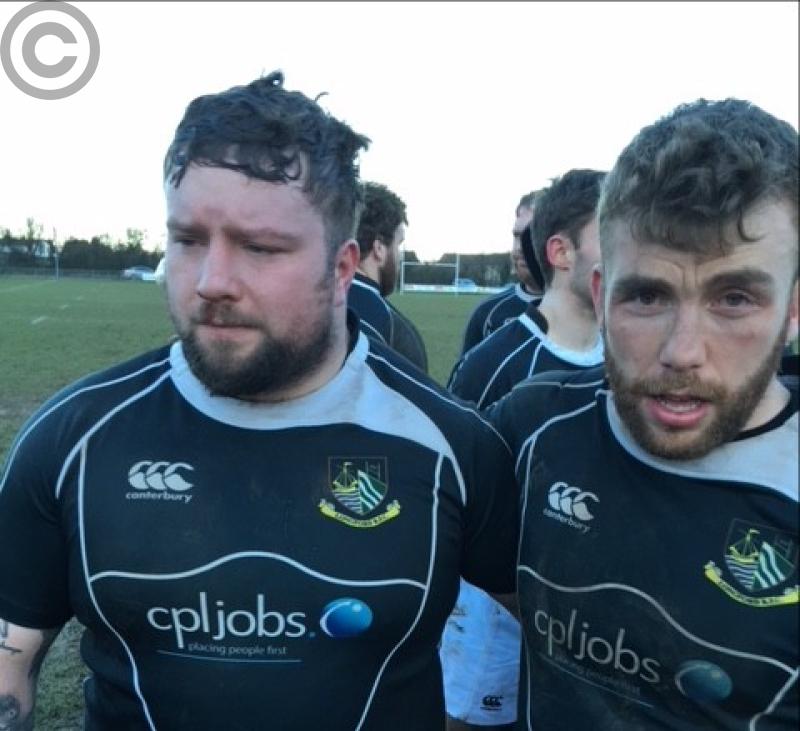 Dylan Quinn and Derek Farrell, who were in action for Longford Rugby Club in the Leinster League Division 1B game away to Suttonians on Sunday last.

Longford came away from Suttonians on Sunday last with no points to show after being unable to sustain a good first half performance, where they scored one try and could have had a few more.

Longford travelled up to the league leaders in third place, six points off the top, knowing that a win would keep them in the race for promotion to the Leinster League Division 1A.

Longford came out of the blocks well with the forwards giving the backs a good platform to run at the Suttonians line.  Longford’s try came after only 8 minutes where a move started just outside Longford’s 22 was fed to Joe McGowan from a skip pass by Colm Glynn.  McGowan tore up the wing, kicked the ball ahead and collected it, to dot down in the corner.  Unfortunately, he was unable to add the conversion, leaving Longford 5-0 in front.

Suttonians raised their game after this, but despite serious endeavour on their part, a mixture of handling errors and committed Longford tackling kept them at bay.

Longford then took over and they will have been disappointed not to convert four scoring opportunities into points.  The best was a Derek Farrell clear line break up the middle but unfortunately the final pass to put the score away was not forthcoming.

Shane Rodgers also made a good break and Joe McGowan nearly ran past the defence for a second try, this time on the opposite wing, but was tackled into touch on the Suttonians 5 metre line.  The first half concluded with Longford camped on the Suttonians line and the Suttonians 7 getting a ten minute break for a sin bin offence but try as they might, Longford could not get over the line for another try.

The pun; ‘a match of two halves’ is often used and certainly this reflected the potential to score and the scoring in either half, the first being Longford’s and the second most definitely being Suttonians.

Suttonians player coach, Henry Bryce, came on in the centre late in the first half and orchestrated a fine second half performance, where they ran in four unanswered tries to pick up a winning bonus point and maintain their place at the top of the table.

Their visit to second placed Kilkenny in March looks likely to settle who the Leinster League Division 1B winners this season will be.

Despite not scoring in the second half it was not for any lack of effort from the Longford panel.  Longford just could not sustain their first half effort, which was further complicated by Suttonians seriously upping their efforts in the forwards to allow their backs to do damage out wide in the second half.

Not a great day at the office, but Longford certainly showed that they are capable of competing right at the top for large sections of the match.  Longford have two league games remaining; away to Portlaoise on Sunday March 4 followed by finishing off their league campaign in CPL Park v Tullow on March 11.  The prize of a third place finish in their first year back in 1B is there for the taking which would equal a great return to 1B rugby for Longford.

Longford Performance XV also have the second round of the plate, which they have done well in in recent years, to look forward to away to North Kildare on Sunday March 18.