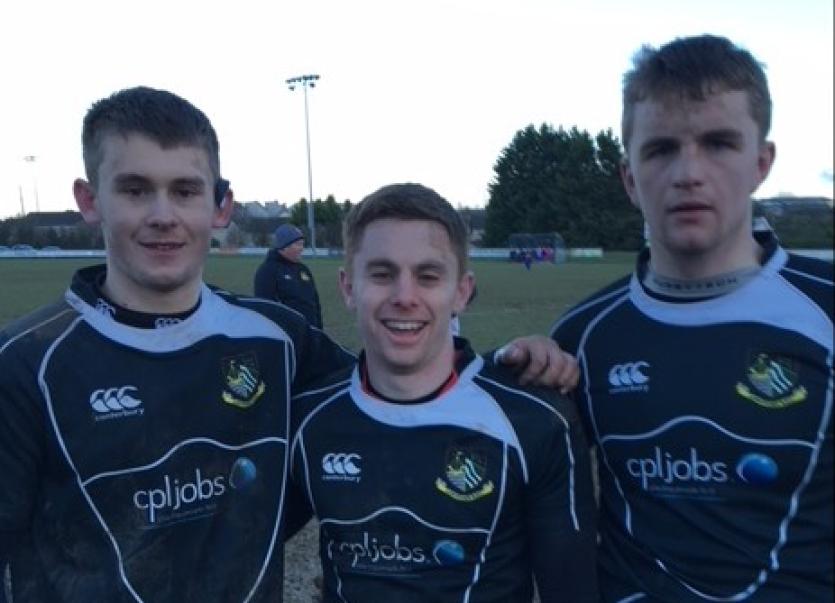 Daniel McHugh, Neal Farrell (captain) and David Geelan pictured after Longford lost out to Enniscorthy away in the second round of the Provincial Towns Cup on Sunday last.

Longford's Towns Cup adventure was shortlived this year but they produced a brave performance in the difficult task away to Enniscorthy in the second round clash on Sunday last.

The Enniscorthy  centre, Ivan Poole, was the instrument of Longford's undoing as he was responsible for 18 of his side's total haul. This was always going to be a big ask for Longford, coming up against a side who are Division 1A title contenders and in the hunt for an AIL slot next year.

Enniscorthy are currently  in second place in Division 1A, just three points behind the leaders Ashbourne, and Longford suffered a setback going into the game when injury struck second row Anthony Hughes on Friday. Having said that, his replacement Aaron Beirne slotted in well to the role.

Longford were undaunted by the task in the early stages of the game as they set about controlling possession and building phases. But one slip was all the Wexford side  needed and when it came the dynamic back line sprang to action with Poole scoring his side's first try and then converting. This was shortly followed by a second try when Dave Dwyer crossed the line with 17 minutes gone on the clock.

It was back to basics for Longford and a steady build saw them controlling territory. While in the Enniscorthy half Longford were awarded two consecutive penalties that Joe McGowan converted to leave it 12-6 as the game entered passed the half hour mark.

Although it looked like the visitors were in control a kick from deep over the Longford defence saw Ivan Jacobs out pace all others to score a try against the run of play and this left the home side in a comfortable 17-6 lead.

Longford's pack were playing out of their skins with loose forward Kieran O'Gorman and lock Benny McManus being particularly abrasive in attack and defence. At all times the midlanders established good footing and set pieces were firing well.

The hard graft was rewarded when winger Sean Flynn scored his side's opening try and McGowan tacked on the extra two points from the conversion to leave it 17-13, putting Longford right back into the game. The introductions of substitutes Liam Brady, David Geelan and Finbarr McGowan all made a big impact from the minute they were introduced into the fray.

Just as it looked like the visitors could close  the gap even further, an Enniscorthy penalty try, which also saw Ciaran O'Gorman receive a yellow card, pushed the score out  to 24-13. Shortly after Poole converted a penalty to leave Enniscorthy in a comfortable 27-13 lead with 65 minutes gone.

The home team's centre got another try,, this time out wide, and though he gave himself a tough angle he knocked it over to leave the score at 34-13. Unbowed Longford fought back and a superb try from Paul Gallogly, which was converted, clawed it back to 34-20.

All further labours were in vain as Enniscorthy ran out  winners but Longford really made it tough for them. There were many players who have every right to be proud of their efforts despite the loss, none more so than captain Neal Farrell who had very influential run at scrum half.

Longford will now have to concentrate on the return to league action as they travel to John J McDowell Memorial Grounds on Sunday to take on the  league leaders Suttonians. This is a top of the table clash and one that will set the tone for the remainder of the season.