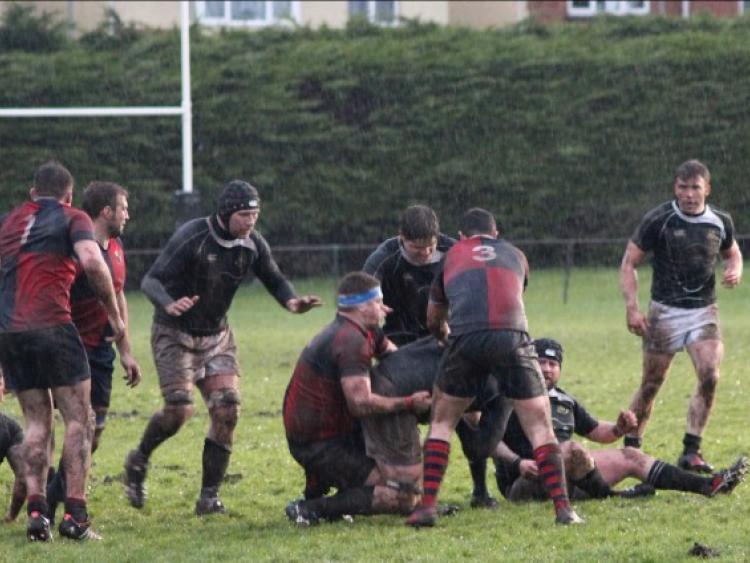 Longford asserted their Leinster League Division 1B title credentials when they crushed the challenge of Coolmine at CPL Park on Sunday last.

The bonus point win pushed Longford into second place in the table, jumping over Tullow and Kilkenny, and they now sit six points behind leaders Suttonians who they will meet in an intriguing clash at the John J McDowell Memorial Grounds in Sutton on Sunday 18 February.

The platform for Sunday's win over Coolmine was constituted in the opening minute. Right from the kick-off the pressure from the chase saw the visitors spilled the ball into touch. With the line-out secured and the maul established Dylan Quinn went over to ground with only a minute gone. Joe McGowan's view of the posts was at an obscure angle but the fullback converted with ease to leave it 7-0.

The home team used this cushion to poke and prod at the visitors defence. A couple of line breaks foreshadowed what was to come with Paul Gallogly gaining good ground thanks to support from Brendan McManus and Anthony Hughes.

A high tackle on Kieran O'Gorman gave the men in black their next score. As the rain started to come down McGowan pitched up with a well struck penalty to bring the tally to 10-0 with 28 minutes gone.

Five minutes later the full back had another opportunity to push his side further ahead when a not releasing penalty was called. This opportunity was on the opposite side to the previous one but McGowan banged it over to leave it 13-0.

As the ice cold rain came down Longford somehow retained their sharpness, but Coolmine struggled to find any footing in the contest. The next infringement by the visitors was when an over enthusiastic forward came in on Neal Farrell before the ball was out of the ruck. The kicker McGowan added the three points to bring it to 16-0.

Longford were in full flight and the defensive effort of O'Gorman as he made tackle after tackle was a joy to watch. The five pointer came when Colm Glynn executed a neat show and go and he then dashed through the gap. Once behind the visitors line the damage was done and Shane Rodgers completed the move and set the scoreboard at 21-0.

Several minutes after the 40 minutes had elapsed Coolmine kicker Eoin Hand had his first shot at the posts clawed and scored  to leave it 21-3 the break.

In the second half Longford benefited from a series of offside infringements and in the 59th minutes McGowan kicked his team further in front, 24-3.

Freezing hands mitigated against free flowing rugby but Coolmine started to used the breeze to their advantage. A number of substitutions changed the dynamic of the game and as the conditions deteriorated the game staggered around the pitch.

The next piece of Longford magic was ignited by a wonderful break by Dylan Quinn. The prop slinked up the pitch and before the Dubliners could reset the defence Longford punched through again. Neal Farrell crossed for the third try with 76 minute elapsed.

The fourth try was a beauty. A penalty advantage call allowed Danny McHugh to chipped over the Coolmine line. Joe McGowan ran a nine counter to the defenders and sliced through, changed angle and cut to the line to ground close to the post. His conversion left it 36-3.

As the game wound down Coolmine managed to snatch  a consolation try. The visiting hooker crossed the line following a sustained period of pressure and Hand's conversion brought the final score to 36-10.

A good day's work for Longford, particularly considering the demands on the players as a result of very challenging climatic conditions.