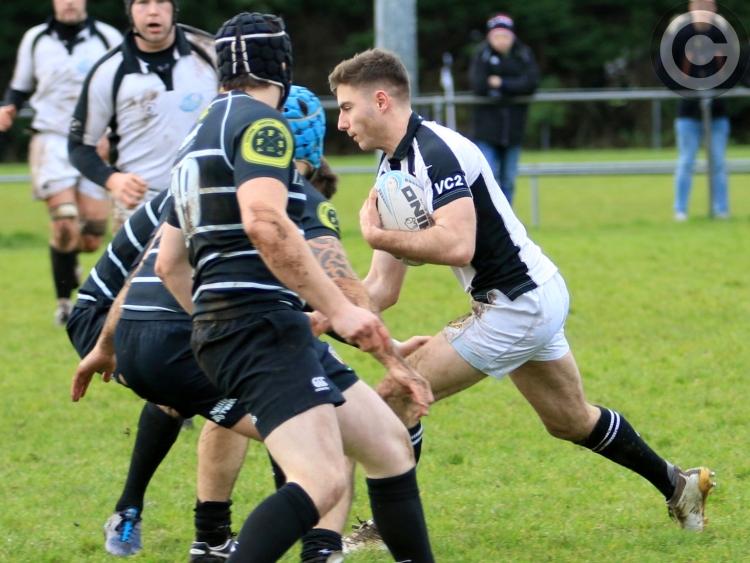 Joe McGowan pictured in action for Longford against Kilkenny in the Leinster Rugby League Division 1B game at CPL Park on Sunday last. Photo: Syl Healy

Longford RFC suffered a setback to their Leinster League Division 1B title hopes when they lost out to Kilkenny by the narrow margin of two points in a very demanding clash at CPL Park on Sunday last.

The home team had a lot of early possession but failed to find a gap. A high number of handling errors meant that the packs were clashing with a degree of regularity. All the early scrums saw Longford bossing the opponents off the ball but as the contest wore on the visitors started to get the upper hand.

Full back Rory McInerney missed a very kickable penalty for Kilkenny before Longford took the lead when Joe McGowan converted a penalty.

All the while the see saw action swung and it took a moment of brilliance by Liam O’Hallahan to make a decisive change to the complexion of the game. The winger burned his counterpart before switching attacking line. As he made his way across the pitch Joe McGowan cut a lovely opposing line, took the pop pass and scored close to the posts. The winger then added the conversion  to leave his side 10-0 ahead with 33 minutes gone in the game.

Approaching the half-time whistle, Longford suffered a critical lapse in concentration. Kilkenny centre Padraic Malone sauntered through the Longford line to finish off a move that had stretched Longford in a way that Kilkenny had been unable to in the previous 40 minutes. McInerney was unable to make the conversion count so the home team held a10-5 advantage at the break.

Longford’s intention to increase  their lead was in full display at the restart. However the steady progress forward saw an intercept by Kilkenny winger Liam Caddy smash that intent. Caddy’s intercept was only part of his industry as he stepped past  three players to cut in under the post for a decisive try and a successful conversion left the visitors in front, 10-12.

As the clock ticked on Kilkenny’s physical advantage started to come into play. Longford continued to be the more threatening with Colm Glynn showed great awareness to use the advantage call to chip the defence and gather but all the efforts ultimately broke down. Even a penalty shot at goal refused to go over.

This was a back to the drawing board loss for Longford. An examination of the errors will take place but that will have to be tempered with the observation that Longford should probably have emerged victorious in this tough clash.

On a day when open play was a rare commodity the efforts of Brendan McManus, Dylan Quinn, Derek Farrell and Ronan Keith should have seen a greater return but it was not to be.

Next up in the Leinster League is  a trip to Clondalkin on January 7.