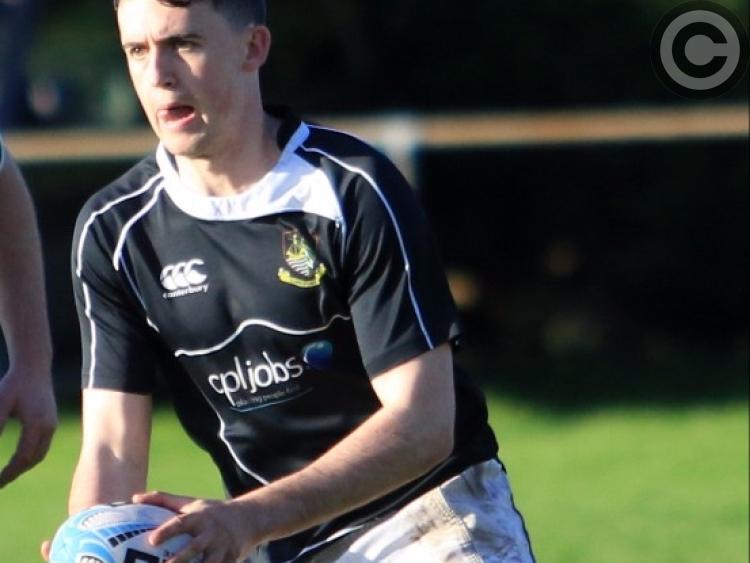 Cormac Hughes pictured in action for Longford RFC in the Leinster Rugby League Division 1B.

After suffering their first defeat in the Leinster League this season at home to Suttonians the previous week, Longford RFC First XV were back in action at CPL Park on Sunday last and showed a lot of character in the tough battle to beat Portlaoise.

Longford started the game  with a great deal of tenacity and ball retention and the pressure showed with a penalty conceded in front of the post, gladly converted by our returning winger and place kicker, Joe McGowan after recovering from injury.

Totally against the run of play Portlaoise took advantage of a dropped ball in the Longford backline midway through the first half to hack the ball ahead leading to a yellow card for Joe McGowan and the awarding of a penalty try to Portlaoise.

The score remained at 7-3 to Portlaoise until another costly error, a number of minutes later, allowed another walk in try for Portlaoise. Neil Farrell, Longford’s scrum half, was tackled and attempted to offload the ball in the tackle to the delight of the Portlaoise centre who collected and sauntered in for a converted try to leave the score line at 14-3 to Portlaoise.

Longford remained calm under pressure despite leaking the two early tries and continued the high tempo attacking play which led to another converted penalty by Joe McGowan. With five minutes left on the clock in the first half, Longford took advantage of some sloppy play from Portlaoise and showed tremendous forward play which led to a converted try by Paul Gallogly.

This was followed by a tremendous surge and direct run from Longford’s adopted native, Kieran O’Gorman, from the Portlaoise kick-off which led to an “two on one” try scored by Colm Glynn who left the Portlaoise defensive cover for dust with his impressive pace.

This left the score line at 20-14 at the break with Longford expected to take advantage but unfortunately they failed to take advantage of the late try surge and allowed Portlaoise to play to their strengths, collect a ball off a line out and rumble the ball over the Longford try line to leave the score at 20-19.

The ever impressive, Joe McGowan was unfortunate not to score a try that Longford deserved when he outpaced the Portlaoise back line to dive and touch the ball over the Portlaoise try line but the referee, from a distance, adjudged Joe to have knocked on in his efforts to score the try.

Portlaoise continued to put pressure on Longford as they sought their first away victory of the league campaign but Longford had other ideas with a beautifully taken try by out half Colm Glynn who again showed great pace and an eye for a gap with an unconverted try in the corner to leave the score at 25-19.

At this stage and with the game in injury time, Longford collected possession from the kick off and put pressure on the Portlaoise defence which lead to a penalty on the 5m line for Longford. Unfortunately due to an indiscretion after the penalty was awarded to Longford, the penalty was reversed to Portlaoise which allowed them to kick up the field and seek out a converted try to snatch victory.

After a number of surging plays by Portlaoise and a number of penalties at scrum and line out time, Longford were dealt a severe blow with a yellow card being shown to the second row and stalwart, Benny McManus. A difficult pill to swallow when Portlaoise had committed four high tackles in the game with no yellow cards shown.

Portlaoise pummelled the Longford try line with Longford showing a great appetite to defend. Eventually Portlaoise put the ball through the hand of the back line in the 53rd minute of the second half and the Portlaoise centre was held up with ball in hand by Cormac Hughes, Colm Glynn and Shane Rodgers which led to a scrum to the home side to clinch a hard earned win.

Longford are currently second in the table with five wins from six but face Tullow in the top of the table clash next after Tullow put up an impressive 40 points on Coolmine in Dublin.

No doubt Longford will travel to the Provincial Towns Cup holders Tullow as the underdogs but will try and continue their impressive away record with 3 wins from 3 fixtures.