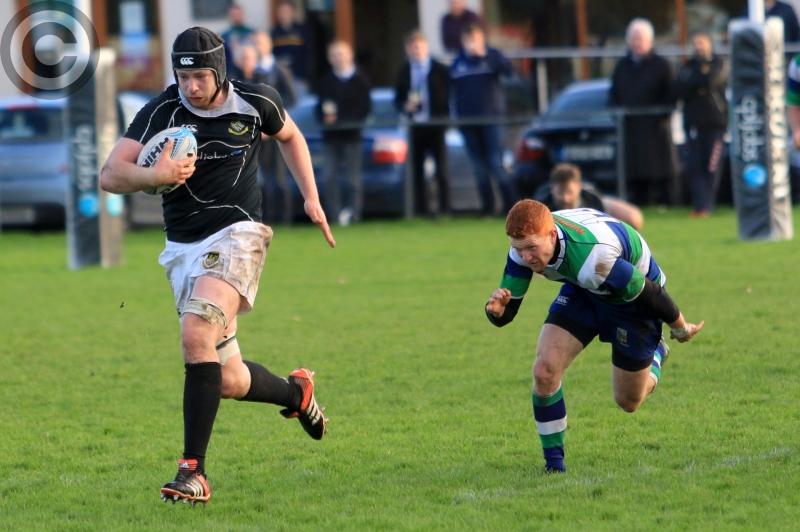 What a difference a day makes! After suffering their first defeat this season, Longford tumble four places from the top spot in Division 1B of the Leinster League  to fourth. Wins for Tullow, Suttonians and Kilkenny all re-jigged the complexion of the table.

Longford will be very disappointed having dominated the Suttonians side for most of the game but were unable to make a number of opportunities count. The Dubliners secured maximum points from their visit to CPL Park on Sunday last, thanks to two soft tries that came in quick succession in the second half.

There were some fine individual performance from Longford players in this game but an infuriating inability to punish the visitors when inside their ‘22 saw the contest snatched away from them.

Suttonians must look back on this game and wonder how they weathered repeated attacks. However to focus on errors is to do a disservice to Longford, but the single losing bonus point is scant consolation for a game that they let slip away.

Longford went with an unusual formation with Kieran O'Gorman occupying a post in the centre of the backline. The flanker was employed to contain the threat of Suttonians second centre Henry Brice.

The visitors were on the offence right from the start. The blazing attack launched by Brice in the opening minutes showed the threat Longford had anticipated.

Nonetheless it was kicker Peter Synnott, playing at eight and throws in at lineout time, who kicked the first penalty and get the Dubliners off the mark, 0-3.

Longford's reply was immediate. Momentum was established on the restart and they progressed to the visitors half. A penalty awarded saw Colm Glynn point at the posts and level matters, 3-3.

The tempo of the game was pretty high but a number of knock-ons resulted in a stop-start feeling to the encounter. The restart set pieces were even enough, even if it did look as if Suttonians kept popping up at scrum time.

A rapid 22 minutes had passed when Longford went ahead. Again this was thanks to Glynn's boot, a scrum penalty in the Suttonians half saw him bring the score to 6-3.

Glynn's next  move further asserted his side's control on proceedings. A kick chase picked up by Finbar McGowan was continued by Derek Farrell who was brought to ground. Glynn took the ball at first receiver and went through the gap like a torpedo to ground under the posts, making his kicking duties a simple task as Longford led 13-3.

Suttonians upped the ante and took the fight into the Longford half. A kickable penalty was ignored for territory and from there they commenced building phases. It was Brice who drew two tacklers before slipping a pass out the back door to fullback Connor Whitten. Who crossed the line, but Synott missed the conversion leaving it 13-8.

As the first half wound down Suttonians ran in another try. This time it was winger Baguzis Domantas the recipient of a spicy off load by Brice to leave the score at 13-13 at the break.

In the early exchanges of the second half Longford laboured and  they could not make their efforts count. Suttonians, for their part, got the benefit of another kick through and this time it was Eoin Fitzpatrick who grounded to bring the score to 13-18.

In reply Longford came up with an end to end play. A knock on advantage was capitalised on by Derek Farrell and his pass to Barry Stewart saw the captain cover a good 80 yards but the flanker could not hold off the covering winger who brought him to ground seven metres from the line.

In a complete turnaround Suttonians scrum-half, Sean Cribbing, ran the length of the pitch somehow manoeuvring thought a poor Longford defence. Grounding out wide the conversion was completed  by Synott to leave the score at 13-25.

Longford looked to battle  their way back into the game but the difficulty of the endeavour was compounded with an unfortunate yellow card for Ronan Keith. The hooker was clearly frustrated by the ruck management and a Suttonians player slowing down ruck ball felt his wrath. The referee took exception to the action and consigned Keith to the sin bin.

Longford were not disheartened by the loss of Ronan Keith and grabbed  a losers bonus point in the last minutes of the game. Starting with some lovely link play, it was the persistence and pace of chasing full back Liam O'Hallahan that secured the five points to leave it 18-25.

The deflation of having lost out on so many opportunities was mitigated somewhat by that last score. The next Leinster league outing for Longford is on Sunday next when Portlaoise pay a visit to CPL Park, kick-off 2.30pm.