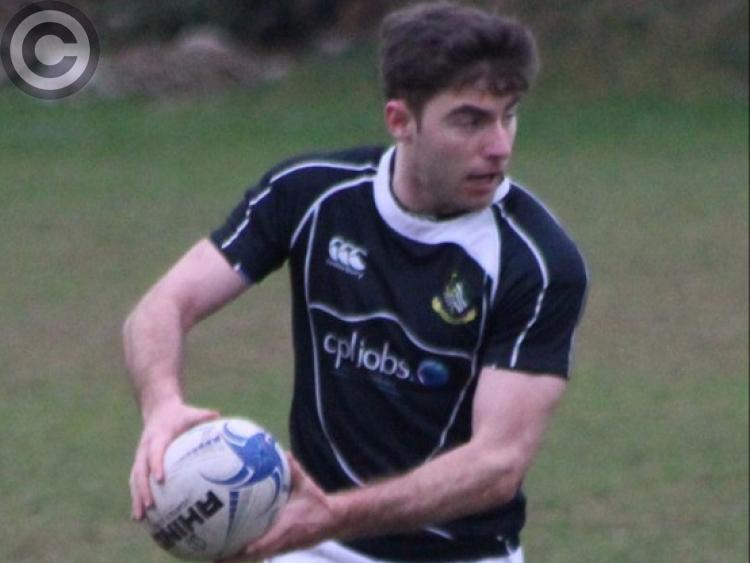 Joe McGowan, who scored 18 points for Longford in the great win against Kilkenny in the Leinster Rugby League Division 1B game on Sunday last.

The Leinster League campaign may only be two games old but Longford 1st XV put on a show that will be a contender for game of the season when they clashed with Kilkenny RFC at the Folkstown grounds  on Sunday last.

Played in perfect conditions, with a bit of a breeze,  this was a thrilling outing that the home team made sure had all the ingredients of high drama.

Dominating for most of the game, Longford only secured the victory with a last minute try from Paul Gallogly.

One of the outstanding contributions on the day was from Joe McGowan who kicked 18 points for the men in black.

The win puts Longford at that the top of Division 1B table and last Sunday's opponents are now in joint second spot.

Kilkenny ware a big physical team that know how to win. These on-the-road points are very valuable, even at this early stage of the season.

Longford Rugby Club showed that they took the journey with the intention of bringing home some points right from the outset. The speed and passing of the visitors ran Kilkenny ragged early on as they really looked to test the opponent's response time.

This was ably demonstrated by Cormac Hughes, making his first appearance of the season, who linked up well with centre partner Shane Rodgers. The first score of the game came from the boot of Joe McGowan who converted a penalty in the fifth minute to leave it 0-3.

Through the game Longford took particular pride in their pack work. Dominating a physical larger foe the front row of Dylan Quinn, Ronan Keith and Michael Bannon were particularly adept at scrum time, snaffling two against the head in early exchanges. Back row Derek Farrell, Kieran O'Gorman and Paul Gallogly tormented in attack and defence.

It was McGowan who added the second score, again a boot over, this time from 38 metres out to leave it 0-6. Kilkenny replied with an impressive counter attack working out of their own half, circumnavigating the Longford defence and crossing in the corner to leave it 5-6.

They nudged in front five minutes later with a penalty to bring it to 8-6. In reply Longford came up with a blistering mover started by centre Rodgers. His line break allowed Cormac Hughes to go in under the posts and the kicker McGowan brought it to 8-13.

McGowan added another three to bring it to 8-16 five minutes later. Kilkenny hit back and a rolling maul by the home side saw them trundle over the line.

The unconverted try brought proceedings to 13-16. Things were getting edgy as the first half wound down, but a superb try by Dylan Quinn in the 40th minute gave Longford a bit of a cushion at the break, 13-23.

The first 15 minutes of the second half was a difficult time for the visitors as they struggled to get back to the pace of the first half.

For Kilkenny some half-time rearranging saw them come out a more fluid side. In the early part of the second  half they ran in a converted try to claw it back to within three points, 20-23.

Longford also did a bit of re-jigging and the introduction of Hubie Connolly, Benny McManus and Barry Stewart all bolstered the attack. Joe McGowan moved his side a little further ahead with a well struck penalty, 20-26.

A yellow card for Barry Stewart flagged a period when the home team ran in two unconverted tries to bring it to 30-26 and put pressure on the visitors. Longford really applied themselves in an effort to redress the balance as the home crowd became increasingly vocal.

However the hard graft of the Longford side was rewarded in the 80th minute when Paul Gallogly ensured his side finished with a flourish by grounding a wonderful try. McGowan's conversion concluded matters at 30-33 in what was a wonderful win.

After the physical demands of that game Longford will be delighted to have no Leinster League fixture scheduled for next weekend.