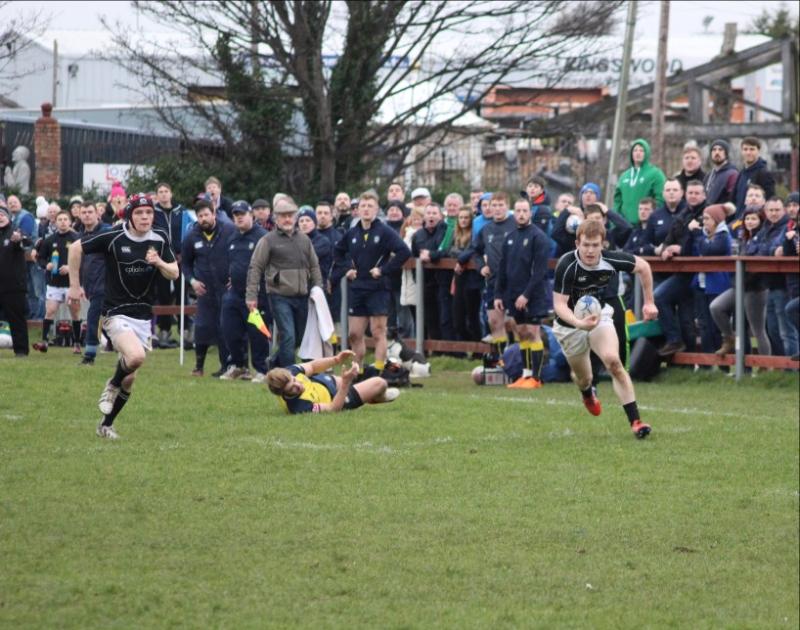 Hubie Connolly and Killian Bartley pictured in action for Longford RFC. Both will be in Longford's team for Sunday's big game at CPL Park against Cill Dara in Division 2A of the Leinster League.

The opportunity for Longford RFC to clinch the Division 2A title last Sunday in their clash with Cill Dara was put on hold, first because of the weather and secondly the outcome of other league games. Carlow's win on Sunday means that Cill Dara and Railway Union are now in a position to claim the top spot in Division 2A of the Leinster League.

Member of the coaching staff, Glenn Baskett, has said that the support of the fans is now a crucial component in final games. He made a call out to all Longford rugby supporters for next Sunday’s re-scheduled game, kick-off 2pm.

He said: “As part of the coaching team we would encourage everyone to get friends, family anyone that can to come to the games Sunday. Drag them from the four corners of the Island if you can.”

The first game of the day is the Development 2nd XV clash starting at 12.30pm. This game will set the tone for the day.

Glenn said: “We win the first game and it puts the visitors on the back foot, and a little bit of doubt sets in. We want the support to be huge for both games.”

The Performance First XV encounter with Cill Dara starts at 2pm. If the visitors lose they will be out of the reckoning for the league title, but a win for Cill Dara means that the final games will be all to play for: “They will be throwing everything at us. Let them run out and see the support we have brought,” Glenn said.

He went on to say: “As a group last summer we set ourselves the target of winning the League. We have worked hard to get ourselves into this position. And it hasn’t been about the 1-15 on the pitch, or the 16-20 on the bench, but the 21+ players that have driven the group.”

“The guys have put in a big commitment to train and we have one last session before the big game on Sunday. We have set ourselves standards within the group that the guys have brought into. There’s an excitement at training that we have a shot to do something this Sunday. We have prided ourselves on our defence. We have built the season on that. And it has showed, we have conceded the least points, conceded the least tries, have the best points difference in the competition.”

A couple of results that went against Longford means that they are scrapping to achieve the goals they set out at the start: “So many guys have stuck their hands up at training and games to push the other guys that the coaches really have genuine strength to choose from, which is a great progression for the club. And that was shown last Sunday week by the seconds away to Dundalk in the Towns Cup, where we held our own for 65-70 minutes against a team two divisions above us. The coaches have put a lot of planning into this game and it has been consistently talked about since January. All this will count for nothing if we don’t achieve our goals for the season.”

Both the Performance and Development fixtures are now confirmed for next Sunday. Longford now have to beat both Cill Dara and Carlow in the next two weeks to achieve their target. So don't forget, tell as many people as possible to get to CPL Park on Sunday next.