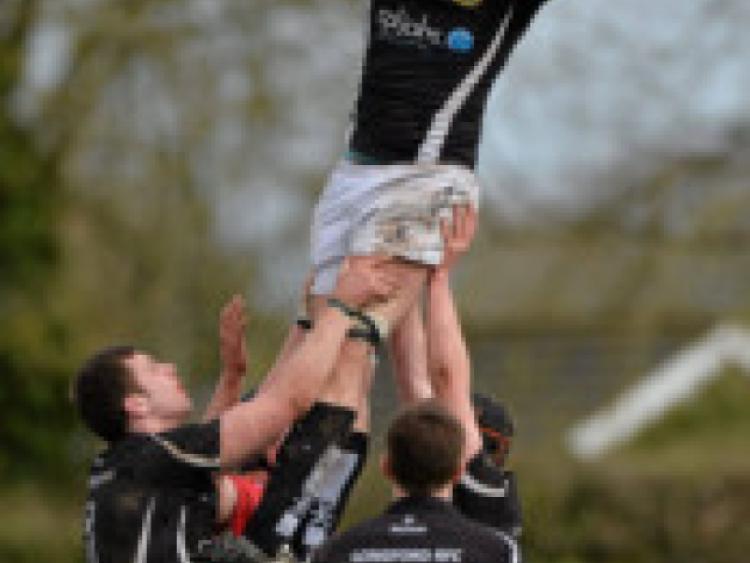 Tremendous Tullamore proved their AIL credentials last Sunday at Edenderry RFC when they completed a clean sweep of success by adding the Towns Cup to their impressive list of achievements this year. They comprehensively defeated Longford in a game that they looked at ease once they got their noses in front.

The Offaly side used discipline and composure to great effect to confirm their hot favourites tag in the Towns Cup Final. They now have a cabinet full of the Leinster League, All-Ireland Junior Cup and now Towns Cup trophy as they head to play with the big boys next year.

Although the score suggests a rout Longford put in a creditable performance against what is now a senior side. The men from the Demesne showed a lot of guts and determination and put in what was undoubtedly the hardest shift this year for the least return.

Longford kicked-off with the unpredictable wind. The Division 1B side knew what they had to do to make a game of this and were in Tullamore’s face from the off. This paid off in the initial exchanges and pressure from the underdogs bore dividends when chasers put pressure on the Tullamore back line. The resulting knock on gave a Longford scrum and after the reset the men in black were awarded a penalty. This was exactly the start Longford would have wanted.

The favourites responded in kind two minutes later when they pushed a scrum advantage and were awarded a penalty. The first score of the game came when a clearance kick by Colm Glynn was chased by Barry Trueick. The winger got to the receiver, tackled and was back on his feet looking for the ball before the cavalry arrived. The Tullamore man was pinged for not releasing and Glynn got his first pop at the target 25 metres out and to the right. Though the wind acted up on his approach the out half split the posts for the three points.

Two minutes later the Tullamore captain and out half Aaron Deverell got a chance to show off his boot work when he pointed at the Longford posts following a scrum infringement 33 metres out. The marksman was right on the spot and the score was all level at 3-3 with seven minutes gone.

The game continued at a blistering pace and Longford had their first setback when full back Ciaran Kennedy signalled to the management that his hamstring injury was not to be played through and replacement David Fagan slotted into the gap. The intense pace was more at issue than malicious intent when a high tackle by tight head David Milne from Tullamore stopped Benny McManus in his tracks and referee Garry Glennon had no option but to issue a yellow.

Glynn had a shot at target from just inside the Tullamore half, but it scraped outside the post. The omens did not look too good when Longford found it difficult to capitalise on the extra man advantage. The binned man was just back on the field when an error by his team mates gave Glynn another chance at adding to the scoresheet. A knock on was picked up by an offside player and the Longford out half was on target to leave it 6-3.

Tullamore’s response was almost immediate. The simplicity of the move did not detract from the competence of its execution. The four times Cup holders ran through three phases before a 9-10 pass to Deverell and the out half delivered a delicious pop to Tom Gilligan. The winger went through the slightest of gaps and crossed the line under the posts. The quick conversion left it 10-6 with eight minutes left in the first half.

Before the half concluded Glynn missed a chance to close the gap thanks to an offside, but when the ref pulled Longford for a ruck infringement and moved it forward 10 metres to directly in front of the posts and Deverell closed the first half scoring with a three pointer to bring his side’s tally to 13-6. The seven times finalists had used the wind disadvantage to be mean in possession, never giving the ball away and only kicking as the final option.

Though Longford had benefitted from that wind in the first half the seven point gap must have seemed assailable. However although they started well it was Tullamore who dominated the second half. Four minutes after the restart Deverell again was the provider. Following three phases when the ball was held up just before the line Adrian Hanley ran a well spotted line that brought him through the Longford defence and over the whitewash. The conversion left it 20-6.

With a 14 point lead Tullamore firmly imposed themselves on their opposition. Every time they passed the Longford ‘22 they looked threatening. Their next score came 14 minutes into the second half when a penalty for not rolling away brought them to 23 points. Soon after they were searing down the left hand side and only a foot in touch prevented them from stretchering the lead.

Though Longford had been having the measure of the Offaly maul the 17 points deficit was part to blame when they succumbed to the attacking tool. On the half hour mark Deverell swapped a high tackle for three points to leave it 33-6.

Longford never gave up and were always an attacking threat. However every bounce of the ball seemed to go against them. In both attack and defence the Longford forwards were full on. Paul Gallogly, Barry Stewart, Benny Gilligan and Dylan Quinn all put in great tackles and carried well, but they were running into a brick wall. Ronan Keith, Clifford Richardson, John Duffy and Derek Farrell all seemed to be everywhere, but it was still not enough.

The final try for Tullamore described their day perfectly. In a passage of play that was lovely to watch, but would have most coaches pulling their hair out. They popped to open space to have a runner pick up, skipped pass when they had an overlap and still everything went to hand and every pass stuck. When Conor Molloy went over in the corner to leave the score 38-6 the Tullamore fans went wild with delight.

Just to prove his humanity Deverell missed the conversion. Though very much a game won by the pack the Tullamore backs had pace, strength and positional sense. Longford’s valiant fight is something that they deserve to be proud of given the quality of the Tullamore side.

Without deflecting from the complete performance by Tullamore it is fair to say that the score did not reflect the work rate of Longford. With the Offaly club off to the AIL at the start of the next season none of the defeated team would deny that they deserve their success. For their part this Longford side are due huge respect for their magnificent achievement in reaching this Towns Cup Final.