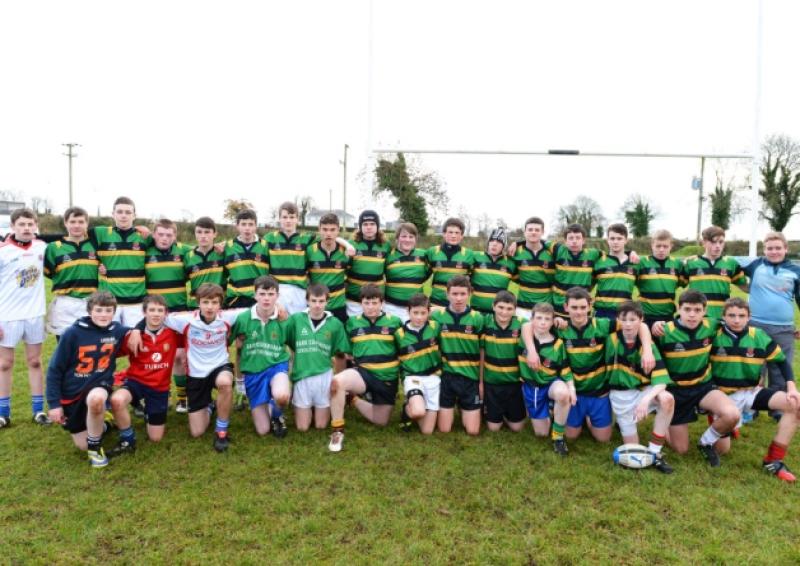 Moyne hit the ground running and, after some early pressure, scored a try in the corner from outside centre Tristan Noack-Hoffman to take a 5-0 lead. After surviving a strong St. Conleth’s attack, Moyne began to dominate the rest of the half, guided by the immaculate boot of fly-half Mark Hughes who constantly pinned St.Conleth’s back inside their own 22 metre line. Moyne scored their second try later in the half, following another period of pressure, leaving them 10-0 up at the break. St.Conleth’s, clearly up for the second half, applied early pressure and were unlucky not to get in for an early try. However, Moyne, again, simply refused to buckle and managed to clear their lines. After gaining two penalties in favourable positions close to the St.Conleth’s try line, Mark Hughes elected to kick the second penalty and struck the ball between the posts to put Moyne into a commanding 13-0 lead.

St.Conleth’s continued to fight doggedly and pulled a try back midway through the second half. As conditions got worse, St.Conleth’s were desperately looking for another score to close the gap while Moyne almost put the issue beyond all doubt when Rory Hawkins made an opportunistic break from full back, only to be denied by a last ditch tackle.

Playing the whole second half with a strong wind, St.Conleth’s finally broke Moyne’s stubborn resistance with another try, but it proved too little too late. After a missed conversion, the referee blew the final whistle, which led to great scenes of joy as Moyne players and their supporters celebrated an historic first ever Duff Cup title.

Moyne’s relentless tackling and never-say-die attitude throughout the game was a credit to the players. Fly-half Mark Hughes kicked superbly for Moyne and he was a major influence on the game, consistently putting St.Conleth’s on the back foot. Moyne had heroes all over the pitch, from the power and flair of the two centres Finbar McAvinue and Tristan Noack-Hoffman, to the power of the pack led by inspirational captain Danny Griffin.

The man of the match award would have to go to Aaron Griffin, younger brother of captain Danny, who put in a massive display as open-side flanker, constantly thwarting St.Conleth’s attacks.

The Moyne rugby squad can be extremely proud of their performances this season. It should have been a difficult campaign after moving up a level following last year’s Junior Development Cup success. However, the current squad have adapted admirably to the step up in class. In the new year, Moyne face St.Andrew’s from Dublin in the Fr.Godfrey Cup, just one stage below the full Leinster Schools Junior Cup competition, which includes the likes of Blackrock College.