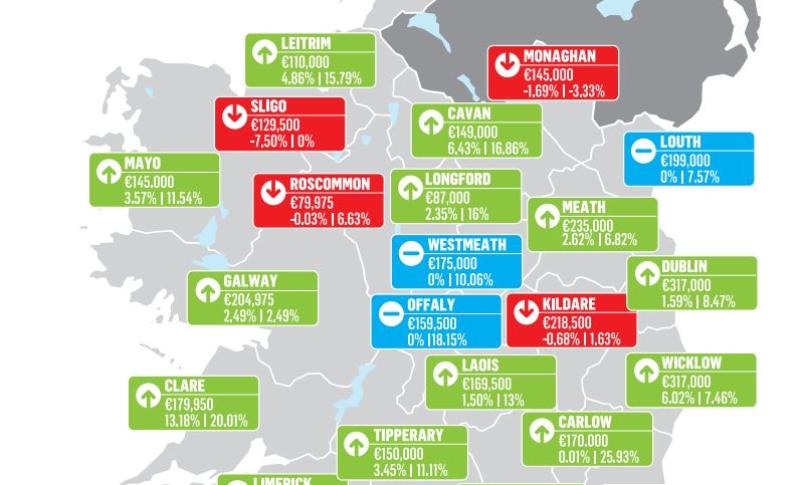 Property prices in Longford were unchanged in the past year, according to the latest MyHome.ie Property Report in association with Davy.

The asking price for a 4-bed semi-detached house in Longford was unchanged both in the quarter and year-on-year at €100,000.

The number of properties for sale in Longford on MyHome.ie was down 17.7% in the last quarter but was up by 4.6% on this time last year.
National picture

The author of the report, Conall MacCoille, Chief Economist at Davy, said the slowdown in price inflation, which was concentrated in Dublin, was largely due to the Central Bank’s lending rules and unrealistic price expectations rather than uncertainties caused by Brexit.

“At the beginning of 2018, the median loan-to-income (LTI) ratio among first-time buyers in the capital was already 3.5 times income and therefore close to the regulatory threshold. The tightening of the Central Bank of Ireland mortgage lending rules – and the resulting slowdown in price inflation - was always going to be felt first in the capital. It also appears that price expectations in early 2018 were unrealistic and a period of adjustment has taken place as a result.”

“Interestingly our analysis shows that the slowdown has been concentrated in the most expensive property types and areas. Whatever about the possibility that Brexit uncertainties have held back prices, there are few signs yet that Brexit is holding back transactional activity. Residential transactions grew by 4% in 2018 to 57,000 and we believe volumes in January and February were also up 4% on the same period last year” he said.

The Managing Director of MyHome.ie Angela Keegan said the fact that we are seeing more transactions, more properties on the market and lower price increases were all positives for prospective buyers.

“There were 21,250 properties listed for sale on MyHome in March, up 13% on last year.
With 18,100 units completed in 2018, it is clear that new construction is also starting to add to supply. There are currently 509 new housing developments listed on MyHome. While this is still short of meeting natural demand, the graph is definitely going in the right direction” she said.

According to the report the average time to sale agreed nationally has risen to 4.8 months and to 3.9 months in Dublin.”

Full details of the report can be found at www.myhome.ie/reports