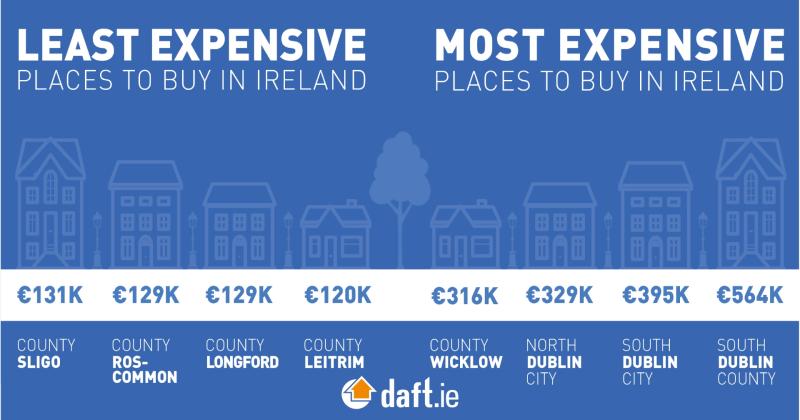 House prices nationally rose by more than €20,000 on average during 2017, according to the latest House Price Report released today by property website, Daft.ie.

With prices stable in the final quarter of the year, this means that the average price was almost €241,000, 9.2% higher than a year ago.

In Dublin, prices rose by 11.7% during the year, the first year since 2014 the rate of inflation in the capital exceeds the national average.

The number of properties available to buy on the market nationwide continues to fall. There were just over 21,000 properties on the market on December 1st, 2.6% lower than the same date a year previously.

The total number of properties available has now fallen year-on-year for 100 months, having been above 62,000 in late 2009. 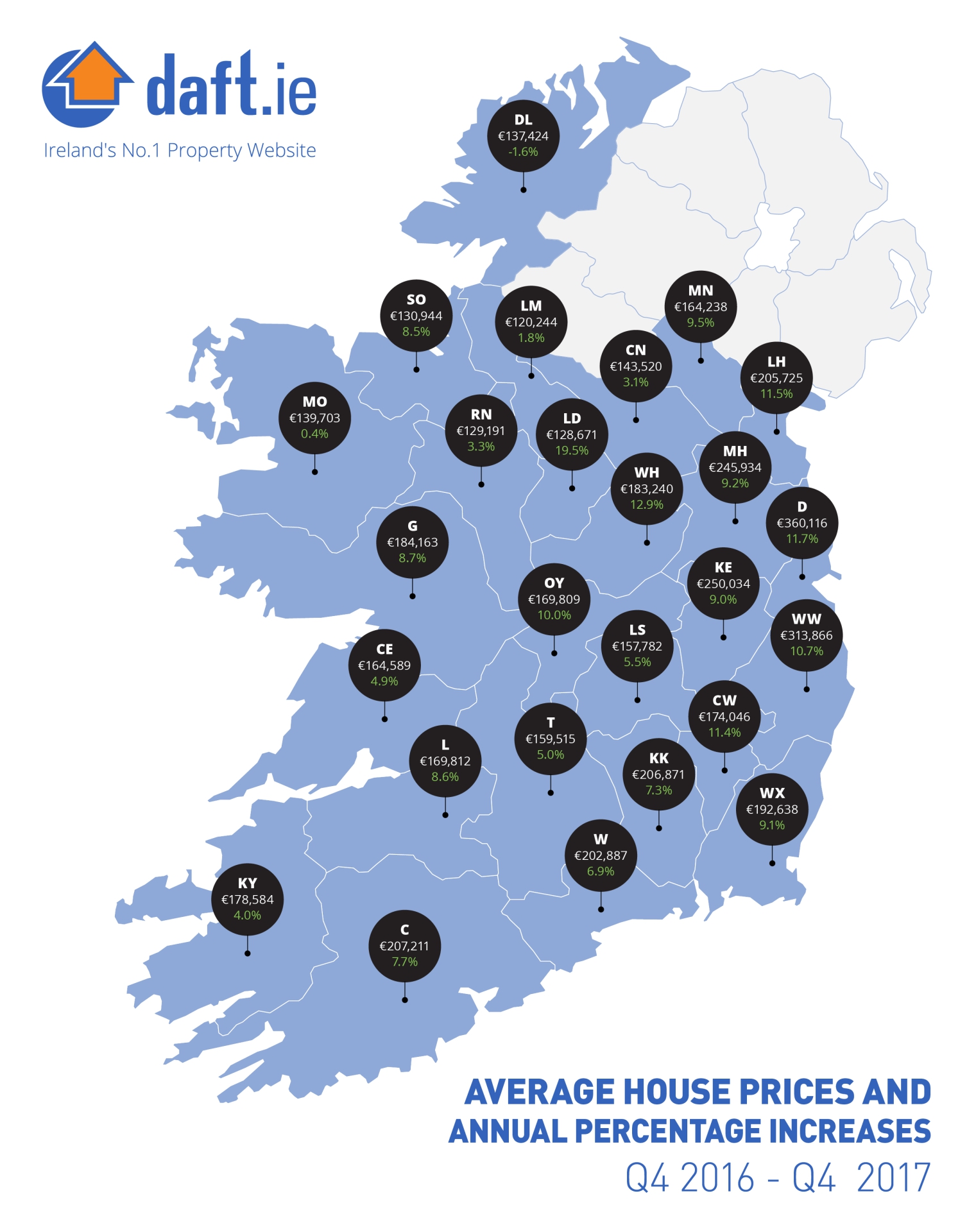 ANALYSIS BY Ronan Lyons, economist at Trinity College Dublin and author of the Daft.ie Report

A year of two halves

The figures in this year-end Daft.ie Report for the sales segment of the housing market show that 2017 was very much a year of two halves. In the first half of the year, prices rose nationwide by an average of 8.8% - with Dublin (9.5%) and the rest of Leinster (11.4%) seeing the biggest increases regionally.

By contrast, the second six months of the year saw almost no change in the average price: whereas it had been €240,093 in the second quarter, it was €240,783 by the end of the year. Drilling into the regional figures reveals a nuance to this: prices rose by 2% in Dublin from July to December and by 1.5% in the other cities – but fell by 1.3% outside the cities.

How can we interpret these trends? At first pass, this might seem somewhat random. If demand is strong and supply weak, how can it be that two quarters see very strong price gains, while the next two see almost none. But this is to forget the lessons of the bubble and crash.

When it comes to the sales market, then, the story of 2017 is the story of just how pivotal the Central Bank’s mortgage rules are. At the start of the year, the Central Bank relaxed its minimum deposit rules, in particular for wealthier first-time buyers. Whereas previously, any mortgage credit above €220,000 required a 20% deposit, from 2017 all first-time buyers required no more than a 10% deposit, no matter how large their mortgage.

This relaxation of the rules spawned an almost immediate price response in the market. But a one-off change in rules can only bring about a one-off shift in prices. And once this change in credit conditions had been absorbed by the market, the rules kicked in. Incomes are rising but very modestly. Thus the second half of the year was the flip side of the same argument: the Central Bank rules matter when they aren’t changed as well as when they are.

The substantial increases over the last four years mean that in a number of parts of the country, prices are now within a year or two of reaching their 2007 peak. The figure accompanying this commentary shows the 20 areas closest to their Celtic Tiger peak. There are at least two noteworthy points from the graph.

The first is that all the areas closest to their 2007 peak are urban areas. Outside the main cities and the Greater Dublin Area, the typical region has prices that are still 45% below peak values. But in Sandycove, prices are less than 10% below their peak. A natural response to this is that the very top end of the market is a law unto itself and that one cannot read that much into the market as a whole from places like Sandycove or Grand Canal Dock.

However, the second noteworthy point to take from the graph is just how spread out the areas closest to their peak area. It’s not only South County Dublin. Areas like Raheny, Stoneybatter, Lucan and Kimmage are as close to their peak as areas like Milltown, Clontarf or Castleknock. And it’s not just Dublin too. In North Limerick City, prices are less than 20% from their peak while in Cork City, Ballincollig prices are just 22% off peak.

The peak of the Celtic Tiger housing bubble is not, of course, a target. Apart from those in negative equity, there is little reason to cheer prices as they rise year on year. What the bigger picture price trends tell us is that housing demand is focused in and around cities.

Contrary to some of the political debate in Ireland, this is far from unhealthy. What is unhealthy is trying to impose a non-urbanised housing market on an urbanised labour market. Ireland is the least urbanised country in Europe – but this just makes it late, not different.

As Ireland goes from 65% urban to 80% or 85% over the coming few decades, this will create huge additional demand for housing in and around Ireland’s major cities. If we as a country get that wrong, we will be stuck in a sprawl model, with implications for family life and environmental sustainability, as well as for the housing market.

In 2018, work will get underway on implementing the National Planning Framework, which is supposed to put in place the foundations for Ireland to grow over the next two decades. Here’s hoping the Framework gets it right. Otherwise, there could be many more years of housing market angst ahead.