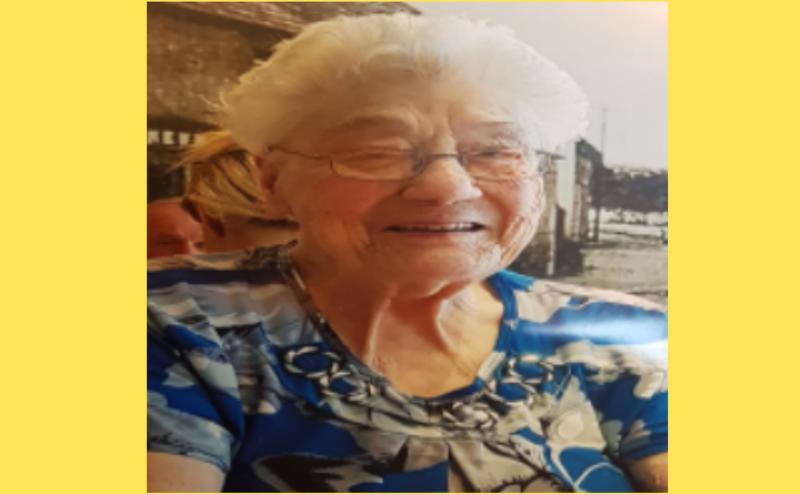 It was with deep regret that we learned of the death on Monday, May 4, 2020 of Mrs Rosina O’Connor (nee Gould), 7 Leo Casey Terrace, Ballymahon, predeceased by her 1st husband Richard Hanlon, her late husband James (Shameen) O’Connor,  her son Eugene and daughter Martina.

One of the oldest citizens in Ballymahon, Rosina, in her 98th year,  was born in 1922 to Emily and William Gould. Her family home was at 113 Kensington Lane, London, she was one of eight children, brothers Billy, Harry and twins Fred and Thomas and sisters Emily, Lily and Nellie. Sadly, Thomas died shortly after birth, Nellie died at 18 months from Meningitis and Emily later died aged 14 with a Rheumatic heart.

From an early age, Rosina had experienced such sadness. As a child, she loved to play hopscotch on the streets in London, she always said they were never bothered by anyone unless the odd horse cart came from the coal wharf.

Things were very different for Rosina growing up. She grew up in a house with no electricity and they all had their own candle in a candlestick going to bed at night. Her mother died when she was 13 and her father when she was 15, she had a few tough years but her story continues.

At 18 she volunteered to join the Air Forces but was turned down due to a heart condition she had, so she found work in a cigarette factory making cigarettes to be sent to soldiers abroad. This is where she met her first husband Richard Hanlon and had two children Carol and Maureen. A few years later Richard passed away.

In 1954 Rosina came to Ballymahon to meet Richard’s family as she had lost contact with his family from Ireland during the war. After spending some time here she met and married an Irish man James (Shamie) O’Connor. She tells of many funny stories and anyone who ever spoke about James mentioned the character he was with a huge heart.

She had 6 children with James, - Elizabeth, Jimmy, Valerie, Eugene, Martina and Nellie. Sadly, Nellie died at birth, Martina when she was 2 and Eugene when he was 40.

Both herself and James loved to dance which she continued to do until she could no longer.  She also loved bingo and her scratch cards and enjoyed the odd flutter on the horses, any horse with “Rose” in the name was backed.  Sadly James passed away in 1985.

Rosina was a wonderful mother and great neighbour and loved to bake, all the kids and grandkids have fond memories of going to Nana Rose for some good food and baking. She had many friends and many adventures throughout her time.

She loved to travel and had many trips to Lourdes which she loved to talk about. She was a much-loved and very popular member of Club ’91 where she enjoyed waltzing and even when she couldn’t waltz anymore she attended the club to listen to the music, she loved all types of music.

She ventured on many trips over the years with the club members and had some great memories and stories. She then went to the Daycare Centre where she loved mixing with everyone and again to listen to music or just play Bingo. She always looked forward to the bus coming each week to collect her. She had amazing style and loved to dress up with her pearls and fancy scarfs.

Rosina loved to read and was still reading the paper at 97 years old, catching up on all the news.

For her 90th birthday she had a short story written about her busy life and Maureen and Carol got this printed for every family member. A very  intelligent woman who could talk about every subject and always loved to sit and reminisce about her life. Rosina had 8 children, 16 grandchildren and 22 great-grandchildren who adored her, as she did them, she is known as the Queen or Nana Rose by her family.

The family started a tradition to celebrate her birthday in December in The Rustic Inn and this tradition continued for 15 years, unfortunately the last 2 years she could not attend and Christmas for the family was not the same. Over the years the group got bigger introducing family members, babies and partners every year, she was so proud of each and every member of her family and never forgot a birthday.

Each family member, and indeed her neighbours and friends have such fond memories and her legacy will live on. Indeed, they say, that from now on, on December 12 every year they will come together in memory of a wonderful woman who will never be forgotten, adored by all.

We extend our deepest sympathy to her son Jimmy, daughters Maureen, Carole, Elizabeth and Valerie, sons-in-law, grandchildren, great-grandchildren, nieces, nephews, relatives, neighbours and many friends. May her dear soul rest in peace.