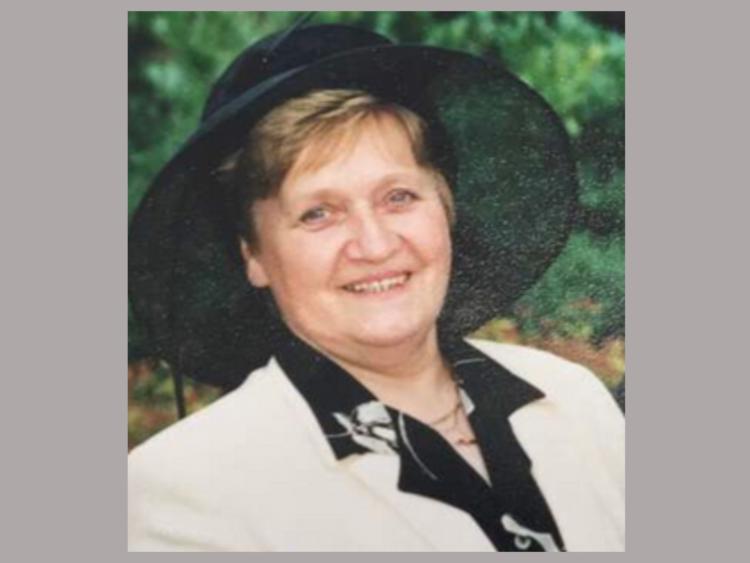 The sad death occurred on Wednesday, January 15, 2020 of Mrs Margaret (Peggy) Finlass, (nee O’Toole), at her home in Cloncallow, Ballymahon surrounded by her loving family following a long illness.

Affectionately known to all as Peggy, she fell ill almost 19 years ago and due to the deterioration in her health over the years, was eventually confined to her bed but was cared for to the highest degree with great love and affection by her husband Sean, her sons, daughters and  grandchildren.

Born in 1941, the second youngest of 15 children, Peggy attended Forgney National School and Ballymahon Vocational School and then spent a number of years working in Hanley’s Newsagents on Main Street where she was highly thought of by all the customers.

She got married to Sean back in 1958 and the couple celebrated their 50th Wedding Anniversary with a very special party at their home just over a year ago with their family, neighbours and many friends.

In the days when she enjoyed good health, Peggy not only reared her own family with great pride and joy, she was also a carer for her uncle Bill, her brother Billy and for a friend, the late Eileen Conlon.

She was a most helpful and caring neighbour, many stories were told in the last few days of different times over the years when she quietly helped out when someone was in need or perhaps had fallen ill, she was always there to lend a helping hand.

Her home was a great place to visit, as did many, the kettle was always on the hob together with her lovely home-made brown bread. She was a proud parish person and a great supporter of Forgney GAA where her two sons played for a number of years.

She also took a great interest in politics and current affairs and up until about seven years ago enjoyed socialising in town with Sean, she loved meeting up with people for a chat. She loved dancing and was a lady of deep religious faith. She enjoyed nothing better than to see her grandchildren as they grew up and call to see her, she always spoke of them with great pride.
Her Funeral Mass was celebrated in the Church of the Immaculate Conception, Forgney on Saturday morning, January 18, by Fr Oliver Devine, Forgney, Fr Gerry Murphy, Tang and Fr Charlie Healy, Carrickedmond.

The gifts which were brought to the altar included some photographs, one of her wedding day with Sean, one with her whole family and another with her late brother Billy whom she cared for for many years. Another gift was some home-made brown bread, a reminder of the lovely bread she made regularly, some knitting wool, she was a dab hand at knitting Aran Sweaters in earlier years and also a CD of Johnny McEvoy, she was a great fan of Johnnys. A poignant reflection was composed and read at the end of the Mass by Peggy’s niece, Sr Mary Keegan.

During the two days when her remains lay in repose at her lovely home and also at her Funeral Mass, a huge number of people called from many parts of the country and many of her extended family in England, to pay their respects to Sean and the Finlass family which bore testament to the respect which has always been held for them all.

A Guard of Honour was formed at Forgney Cemetery by Ballymahon/Forgney Minor team on which Peggy’s grandson Darragh is a player.