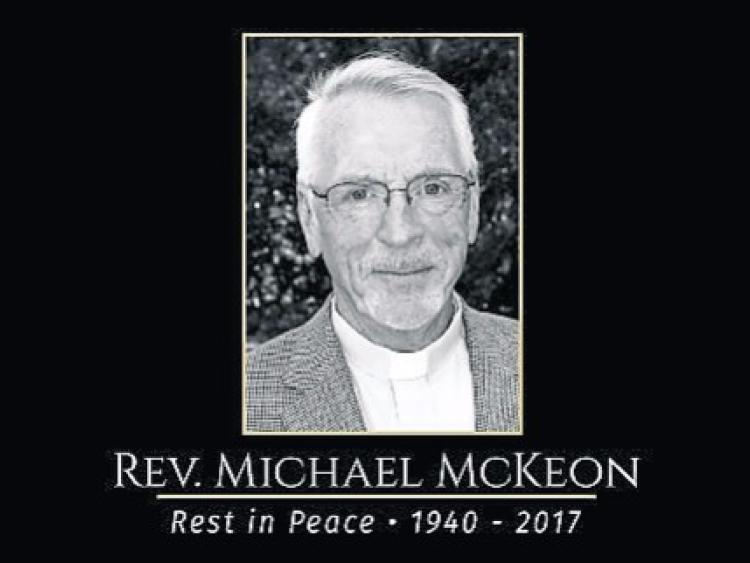 Rev Michael McKeon, who served as a priest of the of Sacramento for 52 years died, on November 23, 2017, aged 76. He was of John and Ellen McKeon, Smear Road, Aughnacliffe, County Longford.

Father McKeon served in parishes of the diocese from September 1965 to June 30, 2008, when he retired from active ministry and was named pastor emeritus of St Rose of Lima Parish.

From 2008 to 2017, he helped with assistance with Masses at various parishes in the diocese.

Upon his retirement in 2008, he continued the work of his lifelong passion (Social Justice) which led him to the priesthood.

Peace and justice is a big component of what I have been doing in the process of my life,” he said. “It’s what I see the priesthood to be all about.”

Believing that the priesthood would be a challenging life, he attended seminary at All Hallows College in Dublin, Ireland, and was ordained for priestly service in the Diocese of Sacramento on June 20, 1965.

During his decades in active ministry, he led a rent strike in Suisun City in 1967, helped start Loaves and Fishes in Sacramento in the early 1970s, had a hand in the creation of the Cordova Food Locker in Rancho Cordova, and helped with the resettlement of refugees from other countries coming to the Sacramento area.

He was pastor of St John Vianney Parish in Rancho Cordova from 1980 to 1990, parochial administrator of Immaculate Conception Parish in Downieville from 1992 to 1993, and pastor of St Rose of Lima Parish in Roseville from December 1997 to June 30, 2008.

During his 10 years as pastor at St Rose, he encouraged his parishioners to lend their time, energy and resources to help others less fortunate in their community.

“A priest has the responsibility of empowering people,” he believed “When we integrate the sacred liturgy, education, the community of faith, in peace and social justice, it changes lives. It changes the world. That is the challenge of the faithful.”

Bishop Jaime Soto presided at the Funeral Mass for Fr Michael in St Rose of Lima Chuch Roseville on November 30 at .

Father McKeon was preceded in death by his parents John and Ellen McKeon, and a sister, Mary Ellen McGauran. He is survived by his brothers John, San Francisco; Jim, Cork and Tom and Raymond, Smear.