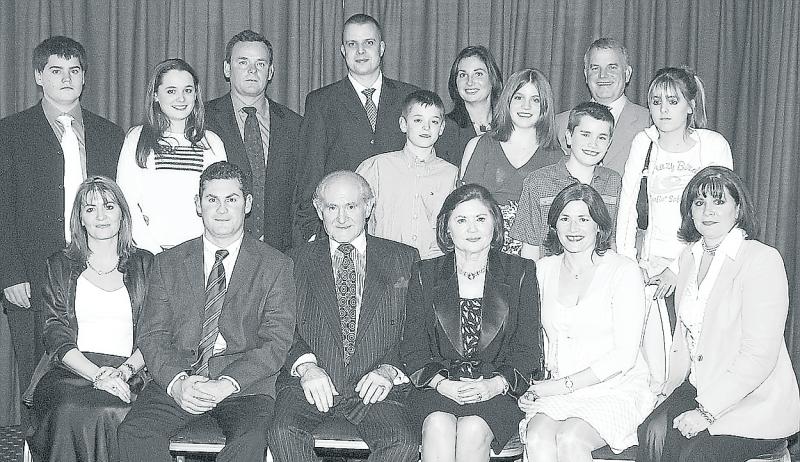 The late Elizabeth Bohan (4th from left, front row), pictured alongside her husband Eddie and family at the 2003 Longford Assoc in Dublin dinner dance

The death has occurred in Dublin of Elizabeth (Betty) Bohan, wife of Eddie Bohan, the successful auctioneer, publican and former Senator from Drumlish.

Dublin born Betty was a powerful force behind her husband and was a key confidante and support to him as he forged a successful business career for himself in the capital.

Eddie Bohan was born on a small farm in Drumlish in 1932 and was the third of seven children to James and Bridget Bohan. At 15, he left for Dublin to join his two older brothers and started working in a grocer's shop in the city.

As he learned the retail trade he became involved in the confectionery business and by age 19 had a few vans on the road and a small factory producing sweets and fancy goods.

At 23 he married Elizabeth Lambert from Rathmines and like many other young couples struggling in 1950s Ireland, they decided to emigrate to America. They spent six years living in Los Angeles where Eddie became involved with the motor trade, starting off working for Chevron in a gas station and progressing to owning three stations of his own by the time he decided to return to Ireland.

On returning to Dublin, the first three of their four children were born and the couple embarked on a new business venture when they purchased their first licenced premises on Meath St and it was duly rebranded Bohan's.

Over the years Eddie would buy and run a number of well known bars in the capital and he was also a hugely respected figure in the industry and served as Chairman of the Licensed Vintners Association (LVA).

The couple were also involved in the property industry, establishing an estate agency practice in 1969 which still trades today and where their son, Eddie Jr, is involved.

An astute businesswoman, Betty was however first a foremost a devoted wife and mother and in latter years she lavished much love and affection on her grandchildren.

The family always retained strong ties with Eddie's native Longford and despite her city roots Betty always delighted in time spent in Drumlish.

They were great supporters of the Longford Assoc in Dublin and the Longford group honoured Eddie with their Longford Person of the Year award in 2003.

Her funeral mass takes place today Wednesday at 11am in Terenure College Chapel followed by cremation in Mount Jerome.