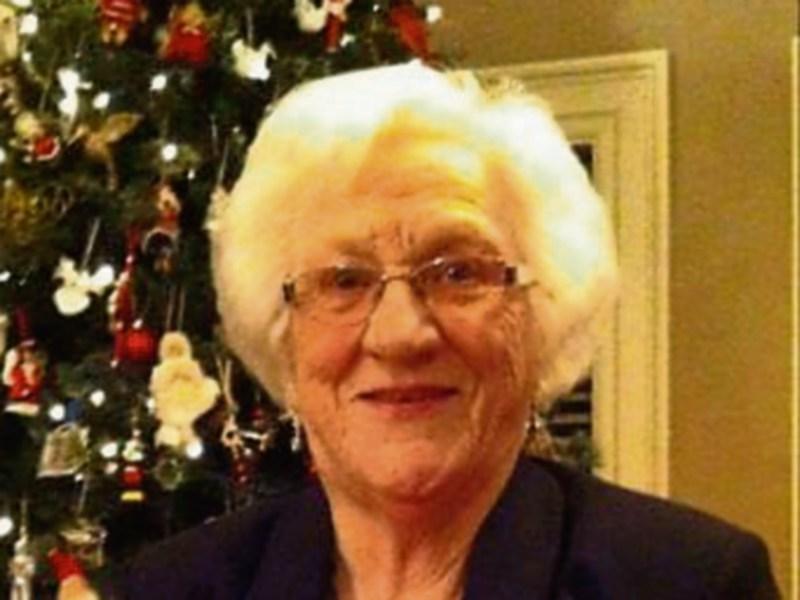 Longford town lost some of its royalty recently with the sad passing of Kathleen O’Hara. Born on  Great Water St in 1935, the stylish and affable woman with the radiant smile was ‘old Longford stock’ and married to the famed musician and bandsman, Danny O’Hara, the couple were the ‘Posh & Becs’ of their day.

Their life together was an enduring love story as you rarely saw one without the other.  Indeed it looked as if the pair were destined to be with each other from the very outset as they were born jut two days apart and were delivered by the same midwife, Nurse Hyland on Gt Water St. Of course  Kathleen were always at pains to point out that she was the youngest, having being the second born!

Kathleen was the youngest of eight Quinn children and sadly her passing marks the end of  that generation of the family. She enjoyed a carefree youth in the town where the old backyards and busy streets were  full of adventure for young minds.

She was a wonderfully outgoing young woman and friends  always referred  to her infectious smile and almost constant laughter. She liked nothing better than a night out dancing and indeed it was one of those night’s out that was to define the rest of her life.

The famous Charlie Dunne &  Band were playing in the Temperance Hall and for the twenty year old Kathleen and her friends, it was a night not to be missed. As fate would have it, t’was also the night that she first danced with Danny O’Hara from O’Connell Terrace,  and a great love affair blossomed.

By now young Kathleen had been working in the busy Longford Leader works on the Market St for a number of years. She was a much loved colleague there  and she always retained a strong bond and connection with her work colleagues from those Leader days.

Danny O’Hara was a noted musician back in the day and would have played with the famed Black Dots and also the Bandeloirs.  They were a wonderfully stylish young couple and exceptional dancers. It is said that people regularly stopped to watch when they took to the floor. All these years later they continued to dance and would have won several trophies together for ballroom dancing.

Kathleen and Danny were married in 1960 and both the best man, Michael O Hara, and bridesmaid, Mary Doogue, are still hale and hearty.  The young couple  first settled in Ward’s Terrace. They were wonderful neighbours with the door always open and the kettle on the  boil. Over  time so many  people would have called to Kathleen to unburden their problems. For them  it was as good as going to confession because whatever was  discussed with Kathleen stayed in No 15 Ward’s Terrace and was never spoken of again.

Kathleen was always fiercely proud of her home  whether it was Ward’s Terrace or Ardnacassa Avenue, where they lived together from 2000. The arrival of their two daughters brought the couple great delight and completed this wonderful love story.

She always strove  to have her home it in pristine condition and much to Danny’s delight, she was also an exceptional cook. Her Christmas cakes were legendary and the preparations methodical and the search for decorations and ingredients often began in August.

Kathleen loved family and delighted in the arrival of her grandchildren. They brought her tremendous happiness and pride.  She was a wonderful grandmother  and enriched their lives in so many ways. She was a deeply spiritual and religious woman, who  believed absolutely in the power of prayer.

With retirement Danny and Kathleen truly enjoyed a new lease of life together. You never saw one without the other and she was always front and centre when her beloved Danny was playing music in any of the local bars. Of course Kathleen took tremendous pride in her appearance and Danny had to repay that devotion as he ferried her to  various hairdressing and beauticians’ appointments. All he did with a heart and a half because his beloved Kathleen was truly an exceptional woman who always gave back three fold.

Both herself and Danny were fiercely proud Longford town people. She loved and celebrated everything that was good about the town and liked nothing better than ringing in the new year in the shadow of the Cathedral with the Pipe Band. She was a woman who hated to hear any criticism of the town and  was always there to promote the town and its people whenever and where ever she travelled to. She was a walking advertisement for all that is good about Longford town. With Kathleen’s passing an era has truly ended in so many ways and with her death we bid a fond adieu to a true daughter of old Longford town.