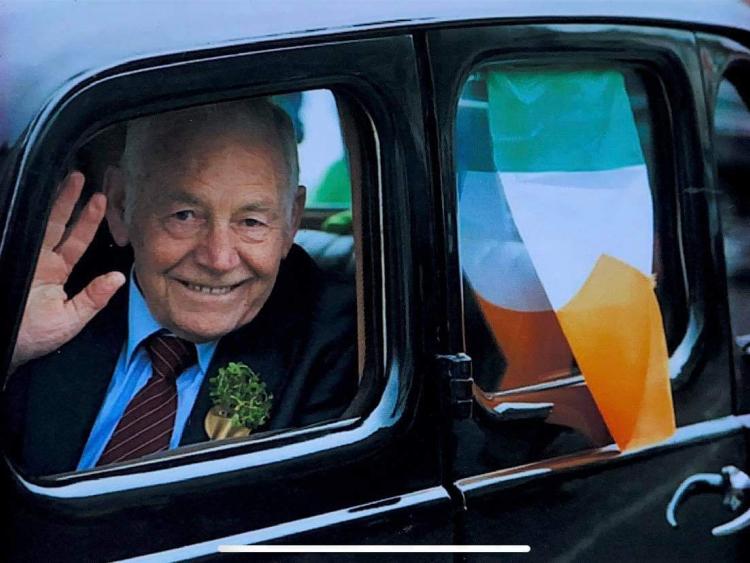 Peter was predeceased by his loving wife Patricia, his parents Peter and Christina, his brother Joseph and sister Annette.

Peter was born and reared in Ballymahon, leaving at the age of 18 to seek his fortune in the UK where he met his wife Patricia and married in 1956.

They went on to raise a family there and Peter had become heavily involved in his local community becoming an active member of the Civil Defence, local soccer teams and a fundraiser for Leukaemia Research Fund where he made his debut as Santy for them.

In his workplace he became a member of the fire brigade and the tug of war team in which he was very active. He was heavily involved in the local youth soccer teams managing for some time. He started his own driving school and taught many of the community to drive.

Every year he returned to the homeplace in Ballymahon during the Summer and decorate and take part in the haymaking in the garden but most to be with his parents. He would save all year in order to be able to the make the trip and for the family this was the annual holiday.

Peter always had a strong desire to return to his home. He returned home in 1998 and swiftly went to work on his new home in Ballymulvey.

He was involved in Community Employment programmes, taking part in the building of stone walls on the Moigh road. He also continued to work on the house and garden in Ballymulvey using his skills to create a beautiful home and garden, he enjoyed tinkering around, trying to fix everything around the place.

Peter was a part of the team who initiated the Day Care Centre acting as Treasurer for several years and was also on the Board of Directors. He became Santa for the young children of St Matthew's National School and entertained them as Easter Bunny each year much to their delight. He was also a member of the Parents Association for several years.

An active member of the Bog Lane Theatre, Peter really enjoyed building sets and the drama that took place there. He was a great believer in community, on two occasions he had the honour of acting as Grand Marshal in the Ballymahon St Patrick’s Day Parade.

He was a good friend of the Church in St Matthew's and loved his work as a Sacristan for some time. He was a man of deep religious faith and he considered it to be an honour to be involved. A thorough gentleman, he was always reliable, calm and thoughtful in his duties there.

Fr Liam tells us that the ashes used on Ash Wednesday last week were actually supplied by Peter some time ago.

Most of all Peter was a family man, supporting the whims and needs of all his children, he did not differentiate between children and grandchildren, they were all loved and always at the heart of his life. He would be there to drive them to football practice or any other activity, going all the way to Tottenham Hotspur to encourage his grandson Luke who was attending the school of excellence there. He went to every production that his grandson Conor was in and was always there with words of encouragement and applause. He always encouraged his family to pursue their dreams.

Symbols of his life brought to the altar, introduced by Peter’s daughter Sue, included a branch representing the family tree, his Santy Boots, a Chelsea shirt, he was an avid supporter of Chelsea, and a picture of his beautiful garden at Lynn Cottage.  His remains were laid to rest alongside his beloved Patricia in Forgney Cemetery.

A Guard of Honour to bid farewell to Peter was formed by the Bog Lane Theatre members on the Ballymulvey road as the funeral cortege passed and another was formed by the Day Care Centre at the church, his neighbours and friends also lined the route at different places to pay their respects to the Lynn family.

He is sadly mourned by his children Sue, Jackie and Peter, his grandchildren Luke, Samantha, Chrissie, Declan, Christopher, Chloe, Danny and Conor, his 14 great-grandchildren, sisters Mona, Kathleen and Una and extended family, neighbours and friends to whom we extend our sincere sympathy.

Much loved, much missed. May he rest in peace.