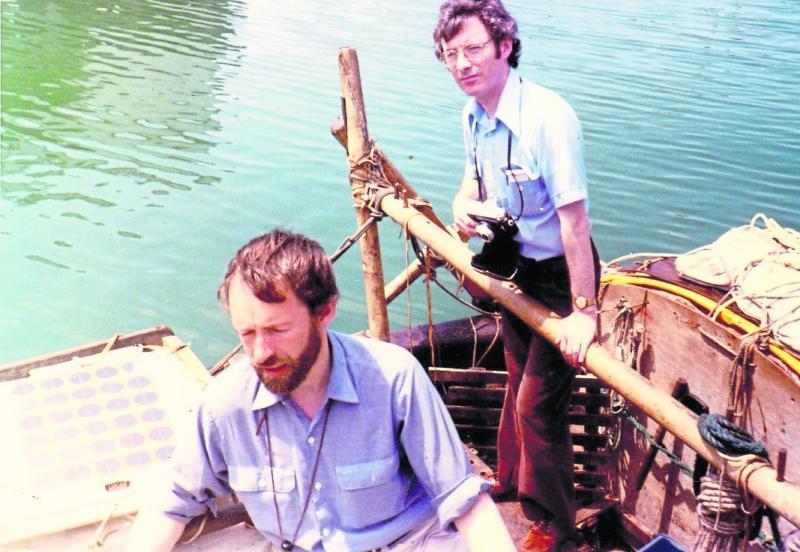 “There’s a man I am almost in awe of.” The man speaking was Tim Severin, explorer and skipper of the Brendan boat, and the man he referred to was Tróndur Patursson from the Faroe Islands, one three members of Tim’s crew.

Forty years ago this year, the intrepid explorer, Tim Severin, won international acclaim for his success in making an epic voyage to the New World in a leather-skin boat, the Brendan.

Tim is himself an impressive man, and his admiration for Tróndur was because of the latter’s great skills as a seaman that were vital in ensuring a safe voyage for the leather craft across the Atlantic.

Tim was our guest for a week after he and his crew arrived in St John’s, Newfoundland. On their arrival, Tim and his crew were out of funds and no place to stay and so, along with my friend from Kilnaleck in Cavan, Dr Barry Martin, we got them money and accommodation.

Tim and I had long chats together, and at one stage when I mentioned that my father was from Longford, he said that it was Longford man Paddy Glennon who supplied the wood for the vessel.

In mid-June 1977, I was living in St John’s, the capital city of Newfoundland, and along with everyone else in that maritime island province, I had been trying to get news of Tim Severin and his crew of the leather-skin craft, the Brendan.

Newfoundlanders are a seafaring people, and know only too well the hazards their fishermen face when going to sea. They were in disbelief that four men from Ireland were headed their way in an open boat with a skin of leather.

Madness, they thought. Tim and his crew had set sail from Ireland the year before, wintered in Iceland, and in May 1977, set sail to the west. They survived several scary moments on their journey through the wild seas of the northern Atlantic.

Tim knew of the alleged early Irish connection with the New World that goes back to the 6th century AD. Saint Brendan (c. 484 - c. 577 AD) is best known for the legendary voyage that took him to the Isles of the Blessed in the far West.

In the modern era, some have tried to read this as evidence that St. Brendan ‘the Navigator’ was the first European to visit America. The text, Navigatio sancti Brendani abbatis (The Voyage of Saint Brendan the Abbot), was composed around 900 CE and Tim had studied it.

Tim had already been on two major explorations and was all set to use Brendan’s Navigatio and recreate that 6th century voyage.

His first venture in 1961 was to retrace Marco Polo’s thirteenth-century journey through Asia on motorcycles, using Polo’s The Description of the World as a guide. Next, in 1967, he followed the routes of early explorers of the great Mississippi River, from conquistadors to nineteenth-century gentlemen explorers, navigating the length of the river by canoe and launch.

Then in 1976, the intrepid explorer, theorising that the Navigatio story might actually be based on historical fact, set out on his third exploration using the 1,200-year-old Navigatio text as his guide.

And so, on the evening of Sunday, June 26, 1977, a small, open boat, The Brendan, its wood frame covered in a leather skin a quarter of an inch thick, made landfall in the New World at Peckford Island, Newfoundland.

Tim and his crew had sailed from Brandon Creek in Dingle, Co Kerry, in a boat that was constructed using only techniques and materials available in sixth-century Ireland. People said the 4,500-mile (7,300km) journey in such a vessel was madness and could never succeed.

As it happened, I contacted the crew at the Holiday Inn in St John’s with a view to interviewing them for RTÉ radio. I spoke on the telephone with one of the crewmen, Arthur Megan, a Dubliner, and he said I had better come soon because they had no money to pay the hotel and they had to leave.

It meant I had to get the help of the Irish community in St John’s to provide them with accommodation, and we did.
Tim stayed with us for a week and he did a lot of phoning to National Geographic New York and overseas. One task was getting the Brendan boat as deck cargo to Boston, which was done and it was later transported to Ireland.

It is now housed at the historic site of Craggaunowen, Co Clare.