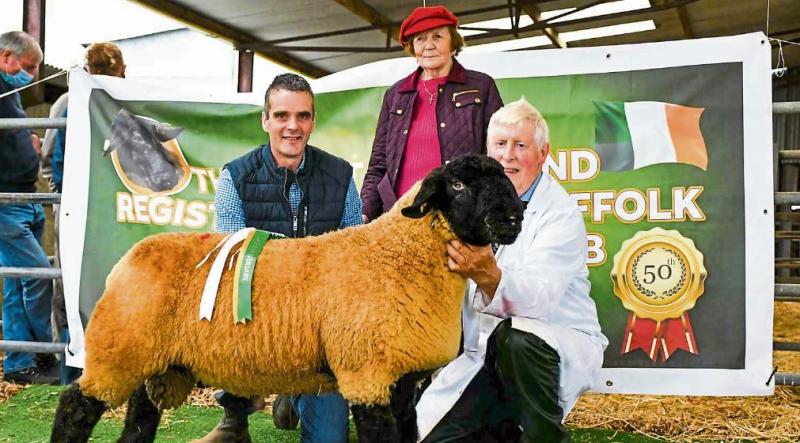 Demand outstripped supply when it came to the ram lamb section. The Club were honoured to have former IFA President, Macra President and second generation Suffolk Breeder Joe Healy, as their judge.

George Candler Auctioneer, rolled back history, his late father John Conroy Candler being the first Chairman of Roscommon Mart, graced the Auctioneers box beside Tom Cox, selling the Supreme Champion and Reserve Champion of the Show which was won by Mark Grealy of the Oranmore Flock; Mark’s flock was established in 1954 by his mother Mary, who is the Club’s president.

Reserve Champion came from the Moatfarrell Flock of Pat Lynch, Longford. The Moatfarrell flock was established in 1949 and is still also breeding Champions and his ram lamb found another home in Roscommon.

The Novice Champion was captured by TJ Broderick from Menlough and First in the Ewe Lamb Class by Michael Murphy from Cummer Tuam; these two lambs sold for €1,000 each and moved to new homes in Galway and Sligo respectively.

In addition to the successful sale this great occasion also included a voucher for every purchaser, a raffle and refreshments.

Former breeders, officers and family members; present breeders and officers; mart staff past and present as well as mart committee, officers and staff mingled, reminisced, related stories from the past, renewed friendships and purchased rams.

Among them Kevin Griffin from Ballymoe; all of 102 years of age, Kevin won the cup for his Champion Ram lamb in 1973. Frank Harrington from Roscommon, Club Secretary in 1975 to 1981 and winner of many champions and classes in the past; Joan Kenny whose late father John and sister Moira were actively involved in the running of the clubs sales in Roscommon since 1975: David Gillespie who was Club Chairman in the early 1980’s, Michael Jones from Tulsk and his wife Martina came to meet friends of his late father Mickey as did Gerry Lavin from Boyle; Gerry went home with the first Prize in the raffle.

PRO Anne Mitchell said the Club founders were men with foresight. “Knowing that the Suffolk was amongst the most popular breed of sheep worldwide they saw that there was a space and a market for the Suffolks in Roscommon and in the West”
After congratulating the prize winners thanking the Judge, mart staff, sponsors, officers current and past; and everyone involved in making the day such a success she asked that a minute's silence would be observed in memory of the great founders of the club.

Next day out for the Club is at Athenry mart on Friday, August 27 at 6pm Show, 7pm Sale.