Moatfarrell flock is the oldest in Suffolk Sheep Breeders Club 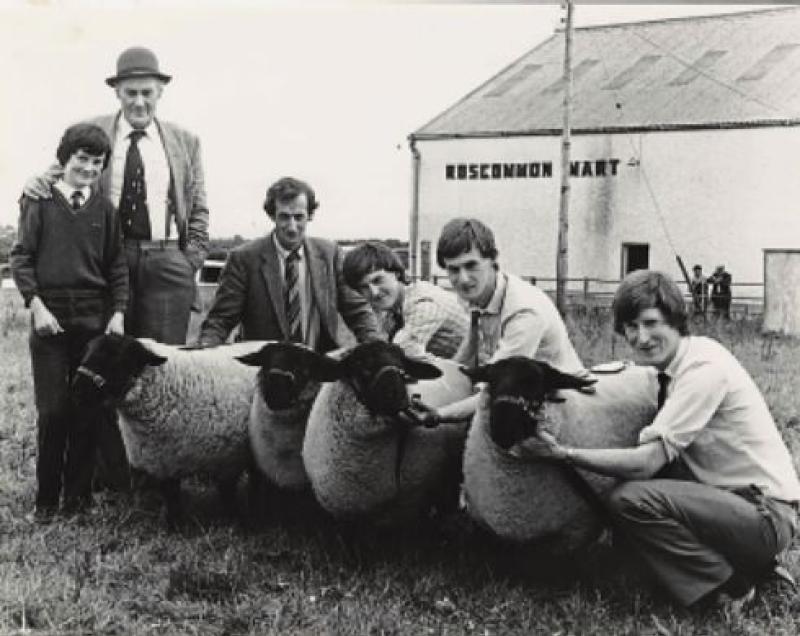 The late Denis Lynch, Longford together with five of his sons showing an outstanding group of four prize winners at Roscommon Sale in 1975

In the spring of 1971 a group of likeminded Suffolk Sheep breeders decided that they would hold a Show of Pedigree Suffolk ram lambs at Roscommon mart.

Denis ‘Denny’ Lynch, a well known Suffolk Pedigree Sheep breeder from Co Longford was invited to be the judge. Denny chose a ram lamb shown by Mr Paddy Broderick from Ballyglunin, Tuam as his Champion.

As this sale was a huge success; these breeders decided to form a Suffolk Breeders club and purchase trophies. The club was named the ‘West of Ireland Registered Pedigree Suffolk Sheep Breeders Club’.

The Club would cover the five Western Counties and Co Longford as Co Longford was operated under the Regional office at the Roscommon Department of Agriculture at the time.

A Committee was elected and the prize winners on the day led by Paddy Broderick donated their prize money to purchase trophies, these trophies are still as significant to their winners in 2021 as they were fifty years ago.

In this atmosphere of generosity and goodwill the club, under the Chairmanship Mico Lavin from Boyle (Mico remained on as Chairman until 1989) was now up and running. First officers were Michael Jones Tulsk, Paddy Broderick Ballyglunin, Paddy Gordon Roscommon and John Joe Cummins Curraghaboy. These were courageous and far-seeing men who not alone were successful in producing Suffolk rams for the home market they successfully oversaw the export of Suffolk ram lambs to Scotland in the mid 1970’s.

Some of these great breeders are still with us today and still breeding Suffolks, sadly others have gone to their eternal rest. It is still a pleasure for our club to be the keeper and holder of all records and minute books for the past 50 years as well as to admire, sit and read the names of the victorious winners, whose names are engraved on our treasured trophies.

These men and women have left a legacy of Suffolk breeding that cannot be surpassed, supplying top quality pedigree Suffolk rams to the commercial sheep farmers in the Western catchment area and beyond.

It is now owned and run by Denny’s son Pat, who produced the overall Champion at our Premier Sale at the Society sale in 2020 and the top price ram lamb at the Roscommon Premier sale in 2020.

The West of Ireland is well known as sheep country and Co Roscommon has the distinction of having the very first pedigree Suffolk flock in Ireland owned by Henry Strevins from Athleague, this flock was established in 1891.

Over the years the club steadily progressed owing to the unity of purpose among us breeders, we are now recognised as the top Pedigree Suffolk Sheep club in the country.

In the 50 years there were many meetings where lively and heated debate took place but it was always constructive; this was a sign of a very healthy club, where unity of purpose and ability of those members to put personal differences aside to ensure that the club went from strength to strength. In doing so we ensured that the club prospered and expanded.

However, 50 years is a long time, and sadly in April 2019 a small number of our breeders decided to break away from the parent club and form a rival club of their own. We regard this as a superficial setback and we wish them well as our club heads into the next 50 years.

The focus of the West of Ireland Registered Pedigree Suffolk Sheep Breeders Club is to promote quality Suffolk Sheep, male and female, shown in their natural state and naturally fed, no cabbage, no typhon, suitable for the commercial sheep breeder; this is what the club has promoted since its formation.

The Suffolks superior traits; hardiness, prolificacy, rapid growth rate, easy fleshing, hardy lively lambs and great wool quality is as relevant today as it was 50 years ago providing the commercial market with quality in quantity.

The West of Ireland Registered Pedigree Suffolk Sheep Breeders Club owes a big debt of gratitude to The Managers, Committee, Auctioneers and staff of Roscommon Mart.

Under the management of the late Owen Morgan the club was welcomed from the onset and every effort was made to ensure that the sales ran smoothly and efficiently. In the mid-seventies when the late John Joe Mitchell approached Owen to sponsor a trophy for the Novice class jointly with himself it was seen to immediately.

This vein of co-operation continued under the Management of Michael Naughton, who succeeded Owen as Manager, continues today under the efficient management of Maura Quigley, who has bent over backwards to accommodate us at every show and sale since she took over the role in 2012. Such has been the success of our club we are now running three sales every year at Roscommon Mart.

The auctioneers, the late Phelim Kerins and currently Tom Cox have added to our success. The gavel never fell until the best possible price was secured. It is important to acknowledge that our sponsors are an integral part of our success story; without sponsorship a club cannot survive; we acknowledge and thank them very sincerely and last but not least our very valued customers, who year after year come back our sales to buy and express their satisfaction with their previous Suffolk purchases.

Our Judge for the day is none other than Joe Healy Athenry, past President of IFA and a former second generation Suffolk breeder.