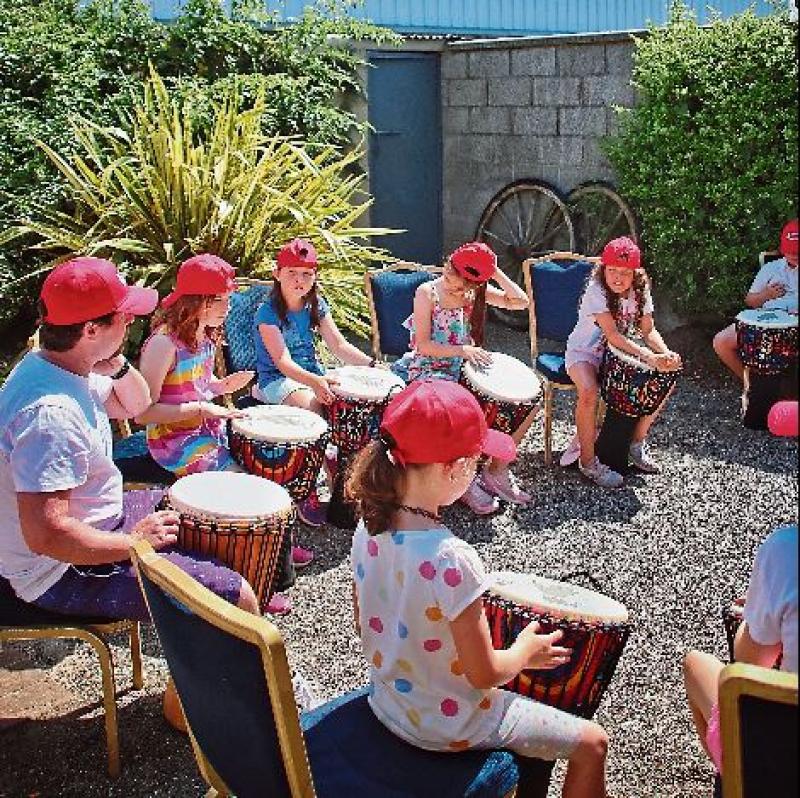 It has been a very exciting summer for Music Generation Longford as it facilitated four summer camps; two on Zoom and two in youth facilities in County Longford.

Rachel Masterson, Administration Officer with Music Generation Longford, explained, “Our Zoom camps were a great success, giving both secondary school and primary school pupils an opportunity to learn the art of songwriting with ukulele. Both week-long camps covered how to craft song lyrics and how to play the ukulele so by the end of the week, the camp attendees had composed a song together.”

Little Learners in Ballinalee were the first group to make loud summer sounds as Music Educators Gary Baker and David Crowe delivered the outdoor camp from Monday, June 12 to Friday June 16. Over the five days, the children took part in Early Years music-making, ukulele lessons and a mix of African and Samba drumming.

Una Carrigy, Chairperson of the Management Committee at Little Learners, said, “The camp was absolutely brilliant for the children. The activities Gary and David had arranged worked so well for the children and they were kept interested and engaged at all times. Feedback from parents was extremely positive and the children were very eager to get in and get started each morning.

“All of the committee at Little Learners, Kathryn Hosey, Pauline Lennon and Isla Duffy, are extremely grateful to all those in Music Generation who made this week happen for us. There are children at the camp who really benefited from it.”

Attendees of the camp were really enthusiastic about the week saying;
"My favourite was dancing. We got to play with the scarves. I liked playing the drums." OM - Aged 5
"I liked the drums, because we hit them, they sounded bum bum bum bum." JC aged 5
"I enjoyed the music, I liked the Bim Bam Biddy. I had fun." KC aged 7
"I was excited to come into camp each day. I loved everything. It was super fun. " NK aged 8
Onwards to Granard from Monday, July 19 where the open area of Lus na Gréine, Family Resource Centre, was filled with sounds of young people learning early-years music, ukulele and Djembe drumming. Music Educators Gary Baker, David Crowe, Jack Duignan and Paul Shanagher kept the camp attendees entertained as they taught these fun new skills.

Family Support Worker at Lus na Gréine, Ber Fagan said, “It was absolutely fantastic, the children thoroughly enjoyed themselves. There’s a lot of children in the camp that would never have the opportunity to learn how to play instruments and it has planted a seed with them.

“There’s been very positive feedback each evening when they’re going out the gate they’ve all said they’ve really enjoyed it.”