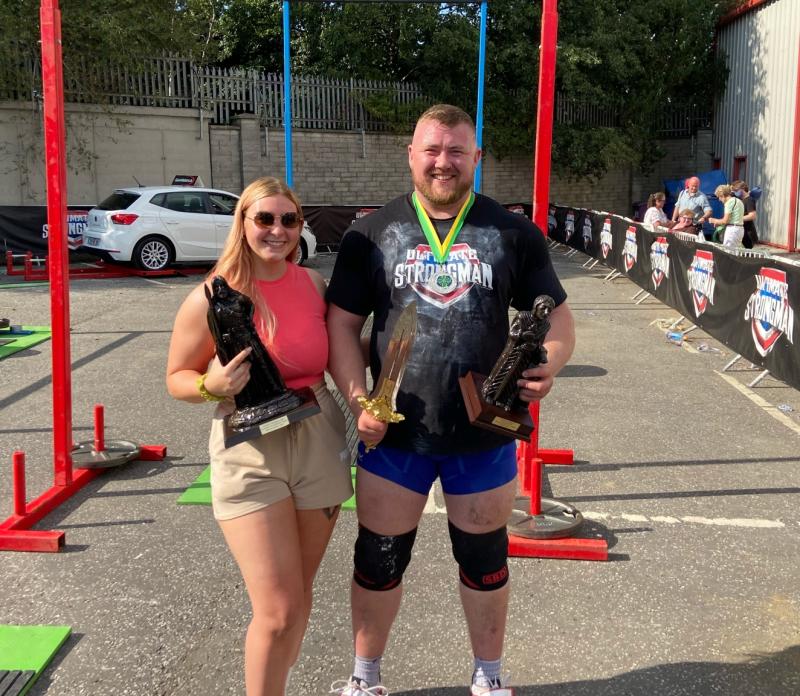 Jack Harkin, son of Catherine and Michéal Harkin from Dring, was thrilled with his success out of a field of twenty-one competitors. Indeed, the Intel maintenance technician, captured three trophies - Republic of Ireland’s Strongest Man, Ireland’s Strongest Novice and overall winner of the qualifier.

Jack remarked, “I’m obviously delighted with how the day went. I went down there with the intention of winning and enjoying myself as I knew what I was capable of doing. It was a well organised event by Ultimate Strongman which I was very happy to be a part of.”

Jack completed his secondary education at Cnoc Mhuire, Granard and he did his first strongman competition in 2018. The onset of the Covid-19 pandemic meant he hadn’t competed since early 2020 until Sunday’s event.

Covid made it difficult to keep focused. With the gyms closing, he had to revamp his shed at home and now he has a fully equipped strongman shed now where he does his training. He trains 4 times a week for 2.5-3 hours a training session which consists of things like deadlifts, log press, axle press, atlas stones, bag throws and squats.

Jack commented, “It was my first competition of 2021 after a hard year, so I was happy to get the result and all the hard work paid off. The main thing is I enjoyed myself as well and made my girlfriend (Jade Hoare) and family very proud.”

The disciplines on Sunday included a truck pull for time over 20m, bag throw over 4m height with bags from 35lbs-55lbs, car deadlift, max axle press and atlas stones.

He came 8th in the truck pull which he was slightly disappointed with, but came fighting back, coming 3rd in the bag throw and being only one of five competitors to get the final bag over. He got a huge 17 reps in the car deadlift which gave him 2nd place in that event. He pressed 147kg for the axle press and was only one of two competitors to do so. And finally coming second in the stone event where he was only one of three competitors to do any reps at all. Getting high placings in each event left him 2 points in the lead finishing up.

Jack’s girlfriend Jade says ‘he’s the most humble person’. She added, “Anyone who knows him will tell you he’s the nicest and friendliest man going and he’ll do anything for anyone. I see all the hard work that goes on behind the scenes. He never complains and he’s always putting me first still. Everyday he makes me so proud.”

For a man that weighs 145kg the energy sapping sunshine made for challenging conditions and Jack is now aiming for a top three finish in Ireland’s Strongest Man in Bangor. If anyone wants to come and watch and support Jack you can buy tickets for event at www.ultimatestrongman.tv
If anyone wants to keep up with Jack’s journey, you can follow him on Instagram @jackharkinstrongman