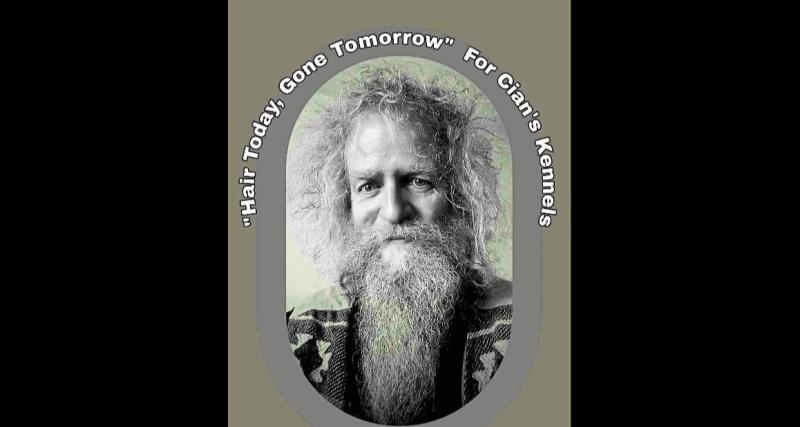 Éamon Ó Ceallaigh is embarking on a fundraiser for Cian's Kennels

Well Éamon is looking for the public’s support once again, and this time he is embarking on a fundraiser for Cian’s Kennels.

“In Tom O’Brien's kitchen last January, prior to us doing the charity single, he suggested, I get the hair cut and any funds collected go to Cian's Kennels. We'll, the time has come,” declared Éamon.

And you support him by logging on to https://gofund.me/ad9944cd

In a novel twist, Éamon said that Chloe from Crandara Veterinary Clinic. has agreed to do the deed. “She has assured me that the shears will be sterilised,” he joked.

Éamon revealed that he will become ‘hairless’ during the first week of August.

Cian's Kennels (www.cians kennels.ie), is a charitable organisation, set up by Evelyn and Enda Neary of Killashee, in memory of their son, Cian, aged 15 who passed away on September 23, 2019, after battling cancer.

Éamon said, “ It will provide an animal boarding facility near the new Children's Hospital, bringing sick children and their pets close together at times when positivity and hope are much needed. All donations will go directly to Cian's Kennels.”
He concluded, “Wait ‘til you see what's hiding behind the hair? Give what you can, it's for a very worthy cause and all support will be really appreciated.

For more information, you can contact Éamon Ó Ceallaigh at 087 2621294 or to make a donation log onto ‘Hair today, gone tomorrow for Cian's Kennels’ on gofundme.com