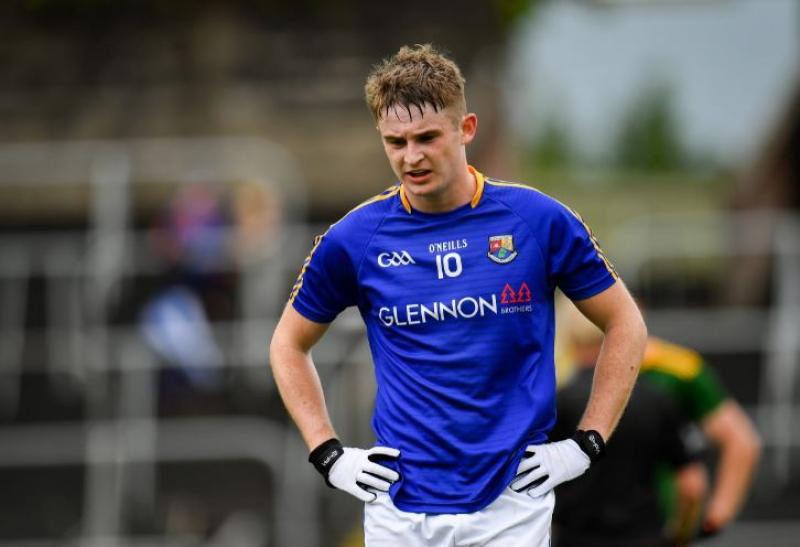 Dessie Reynolds of Longford after his side's defeat to Meath in their Leinster GAA Football Senior Championship Quarter-Final match at Páirc Tailteann in Navan, Meath. Photo by Seb Daly/Sportsfile

Longford’s Leinster Championship campaign ended tamely in Pairc Tailteann in Navan as they were comprehensively beaten by Meath.

From start to finish the Royal County controlled the game with their fitness and the way they worked the ball exceptional. Longford just found the going very tough.

Meath made the perfect start to the game; with just over one minute gone on the clock Bryan McMahon played the ball to Shane McEntee and he found the back of the net from a tight angle.

McMahon followed up with a point for Meath to put four between the sides with just five minutes played. Longford’s first point came from the boot of Rían Brady in the sixth minute after he received a pass from Mickey Quinn.

Cathal Hickey and Darren Gallagher (free) traded points before a good Dessie Reynolds point cut the gap to two. Longford made mistakes and Meath should really have punished them. They had goal chances but went for points.

Longford felt they should’ve had a penalty in the 18th minute when Kevin Diffley was taken down, a free was awarded with Robbie Smyth tapping it over. Meath had their homework done on Longford; several high balls that were put into the Longford forward line were broken down.

Kevin Diffley did very well to deflect the ball out for a ‘45 in the 24th minute as Meath went in search of a second goal; Mathew Costello fired over the ‘45. Minutes later Darren Gallagher got a heavy knock and although he tried to continue on he was substituted at half-time. David McGivney hit over the free from Gallagher’s foul to leave two between the sides in the 28th minute.

In the final minutes before half-time Meath put Longford to the sword and extended their lead to 10 points with a second goal; the impressive Jordan Morris flicking the ball to the net. A second McGivney free was the first score of the second half.

Meath continued to look dangerous in attack and with Joey Wallace instrumental in every good thing they did it was only a matter of time when they got a third goal. That goal came in the 47th minute through the excellent Fionn Hickey.

The Royals rang the changes with two of their substitutes getting their names on the scoresheet; Eamon Wallace and James McEntee (two points) stretching the lead to 17 points in the 61st minute.

Longford substitute Darragh Doherty hit over a fine point in the 62nd minute. But Meath were clinical in the forward line and got a fourth goal in the 70th minute through substitute James Conlon. Joseph Hagan scored a mark for Longford while Cillian O’Sullivan got the final score of the game when he pointed over deep in stoppage time.