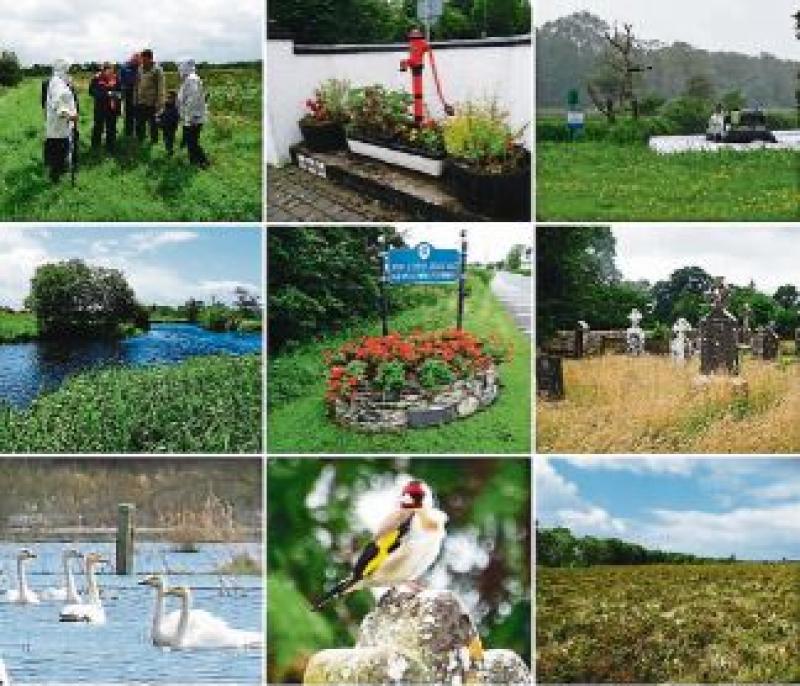 With funding awarded in 2019 by the Community Foundation of Ireland from their ‘Environment and Nature Fund’, the Newtownforbes Tidy Towns association hired an ecologist to survey the community and to prepare a detailed Biodiversity and Conservation Plan to be implemented over the next five years.

Dr Catherine O’Connell, B.Sc., H.Dip. Edn., Ph.D., was hired to examine the rich habitats that surround the village of Newtownforbes and to devise actions to maintain and enhance local biodiversity.

She carried out three visits from November 2019 to July 2020 and prepared a detailed report that was launched recently via a Zoom meeting.

Almost forty people joined the online session, including representatives from other Tidy Towns associations in the county, and all were fascinated to learn of the richness and diversity of the local biosphere.

In her introductory remarks, Eileen Reilly, chairperson of the Newtownforbes Tidy Towns group, thanked the Community Foundation of Ireland for the grant support and observed that this work took place over the virus lockdown period, a constructive use of time that was constrained with regard to usual Tidy Towns activities.

In her presentation, Dr O’Connell emphasised the unique and precious landscapes that surround the village and that may escape everyday notice, most particularly the protected boglands that are of European Conservation Importance and that border Lough Forbes and the River Shannon.

As a result of her biodiversity surveys, Dr. O’Connell identified 143 plants, 21 bird species and 31 animal species in 13 different habitats.

Nine of the birds recorded are of conservation concern, including Swallow, Skylark and Whooper Swan, while the Badger, Hare and Frog are among the protected animal species.

In a 62-page report, over one hundred biodiversity enhancement actions are identified for the local community to take over the next five years.

The main recommendation is for the Tidy Towns and other community groups such as the GAA and the primary school board to work cooperatively to create habitats.

One simple change would be to plant trees in groups to create small woodland habitats rather than planting in linear fashion. Leaving grass to grow, flower and set seed under trees, encouraging miniature wild meadows to develop, instead of comprehensively mowing green areas, is another simple change recommended.

She entreated members of the community to reject the use of weed spray and to use peat-free compost in planting schemes.

Responding to the presentation Eileen Reilly remarked “We have been trained to think of gardening as reductive – cutting, clearing, tidying and mowing. Order and neatness have their place but let’s consider being more tolerant of weeds and grass growth.

Our seasonal campaigns to reduce Nature into tidy compartments are short-lived because Nature knows better.

“Our tidying instincts are more effective directed against litter than long grass and flowering weeds, the benefits of which we are mostly unaware. We need to think of weeds as plants first and every plant has a purpose, even the less attractive ones.”
Members of the Tidy Towns committee and other local groups are very pleased with the scope of the report and the identification of actions that can be taken over the coming years from encouraging habitat development around the primary school to providing detailed information on local flora and fauna as part of the new Biodiversity and Heritage Trail that is currently under development.

This 5k trail will lead from the village through farmland and woods to the protected raised bog lands along the Camlin River and close to the River Shannon.

“If one had a bird’s eye view over Newtownforbes, one would realise just how close the village is to unique and rich landscapes and waterways”, said John O’Brien, chairman of the Biodiversity and Heritage Trail sub-committee of Newtownforbes Tidy Towns. “Work will begin on the trail towards the end of the summer, thanks to the support of Longford County Council and funding awarded from the Outdoor Recreation Scheme”.

This amenity will open up the landscape to walkers who want to experience the beauty and peace of the fields, the woods and the raised bogs and it is planned that bird-watching and beehive observation points will be included at the end of the trail.
In charge of the Lough Forbes Special Conservation Area, Dr Sue Moles, a Ranger with the National Parks and Wildlife Service, has been especially supportive in developing the trail proposal and route.

Eileen Reilly welcomed the ecologist’s report as a blueprint for the future. “It is a timely and beneficial tool in designing plans of action and in applying for funding to carry out those actions.

“We have dozens of recommended actions and ways to collaborate with other community groups such as the GAA, the national council of which has recently committed to biodiversity.

“We hope that what we carry out in Newtownforbes can be an example for other Tidy Towns associations interested in supporting biodiversity. I would like to ask all residents of the local community to follow the Newtownforbes Tidy Towns on Facebook. We have a committed group of about twenty volunteers but we would be delighted to recruit more allies and supporters.

“In the coming weeks we will be launching a community clean-up and we will be asking people to clear litter along their roads, streets or within their housing development.

“We are also planning a scrap metal collection, part of our efforts in clearing a section of our Biodiversity and Heritage Trail of metal dumping from many years ago.

“The Newtownforbes community is active and generous with time and work. Residents appreciate the beautiful surroundings of the village and its landscapes and we ask for ongoing support in our efforts to care for and enhance our surroundings.”

If anyone is interested in obtaining a copy of Dr O’Connell’s report in PDF form, please email newtownforbestidytowns @gmail.com