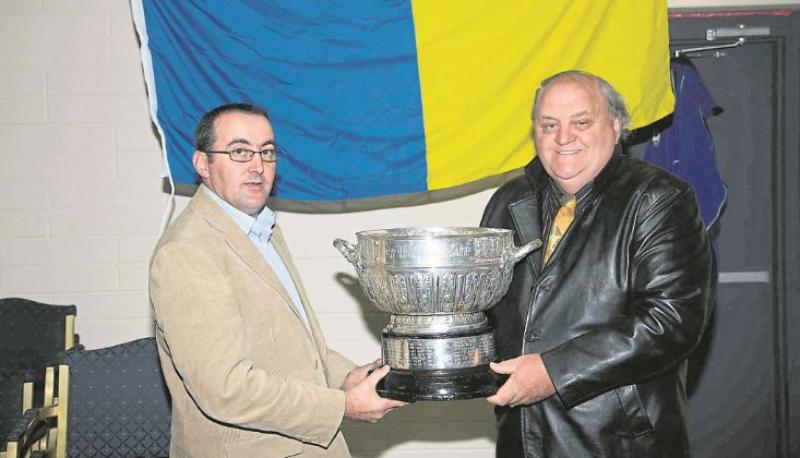 A poignant stillness descended upon the north Longford town of Granard last Saturday afternoon as people from far and wide came to line the streets and pay their respects and tribute to the late Vincent Daly, a dedicated soldier and a great sportsman, on his final journey from St Mary's Church, to Granardkille cemetery.

Vincent passed to his eternal reward, peacefully, surrounded by his family in Tullamore General Hospital, on Wednesday, May 26.

Vincent will always hold a special place in the annals of Longford GAA history as it was he, on Sunday, July 21, 1968 at Croke Park, who had the honour of accepting the Delaney Cup following his side’s 3-9 to 1-4 victory over Laois in the Leinster senior football championship final.

It is an achievement that hasn’t been emulated and many of Vincent’s colleagues from that famous triumph 53 years ago formed a guard of honour at his funeral on Saturday.

Guards of honour were also formed by St Mary’s GAA Club Granard past and present players and officials, along with Vincent’s former colleagues from the Defence Forces and members of the Glengarry Club, ONET, IUNVA and Military Police Association.

Prior to dismantling Laois in the ‘68 Leinster Final, the Longford men dispatched with the challenge of Dublin (1-12 to 0-12, June 2 in O’Connor Park, Tullamore) and reigning All-Ireland champions Meath (0-12 to 0-7, July 7 in Cusack Park, Mullingar).

The Longford Leader GAA correspondent aptly summed up the success; “Long may this present Longford team fill an honoured place in the minds of all their supporters. They made a historic breakthrough when winning the National League title in 1966 and now they have created another record, there can be no doubt at all that this is the greatest team ever to represent Longford.”

Unfortunately, Longford’s heroic bid to reach the All-Ireland Senior Football Championship Final was shattered by the might of Kerry on Sunday, August 4 before an attendance of 34,063 in Croke Park as they lost out by 2-11 to 2-13.

St Mary's led the tributes to Vincent, 'one of their own' , saying he was a member of a famous St Mary’s football family, stretching back to the 1930’s and beyond.

He played a big part in the history of the GAA in Granard and Longford, a career that started by winning the Schools’ championship in 1960.

His Longford Leader pen picture for the 1960 Schools’ final reads: Vincent Daly (11) Another youngster who has come on immensely since the start of the season. Displays a lot of his father’s (Willie) abilities.

His ’61 pen picture read – A clever go ahead forward, who is very accurate. The Longford Leader reported that Vincent ‘had the better of exchanges’ in the ’62 Schools final, bringing his Schools championship medal haul to three.

Further championship medals followed before he was selected to play on the County U18 team in 1966. The same year, he was described as one of the stars on Granard's Junior team that reached the final.

In their tribute, St Mary's wrote: "Vincent played on well into the 1970’s and we will always remember his willingness to help St Mary’s celebrate the opening of our clubhouse when he brought his football mementos to put on display with the rest of our club's history.

"He was delighted to take a photo with the Leinster Championship (Delaney Cup) Trophy that he had received on behalf of Longford in 1968 with his son Paul that evening.

"His passing will bring back memories of the important part he played in the great St Mary’s teams of the ‘60’s and in our club's history.”

Peter Keenan ONE Longford described Vincent as their friend and comrade.

In a tribute they said, “Vincent served full time with the FCA in Connolly Barracks Longford before he enlisted in the army in the late seventies. After basic training he served with the 4th Motor Squadron, a few years later he joined the Military Police, a unit he served in until his retirement.

“He was a great sportsman, he captained the Longford team that won the Leinster Senior Football final in 1968, they lost narrowly to Kerry in the All-Ireland semi-final the same year. He was a part of all the great Barrack teams that enjoyed success throughout the seventies. He was also a talented musician and with his great friend Paudge Murphy entertained punters all over County Longford and beyond for many years.

“Vincent’s heart was in the right place, his dedication to his family and commitment to the army was beyond question. He retired from the army in 2006 after some 35 years of loyal service. He was a proud Granard man, dedicated soldier, great sportsman and will be missed by all that knew him.”