War of Independence: Death of Lieutenant John Scally, Gallagh in 1921 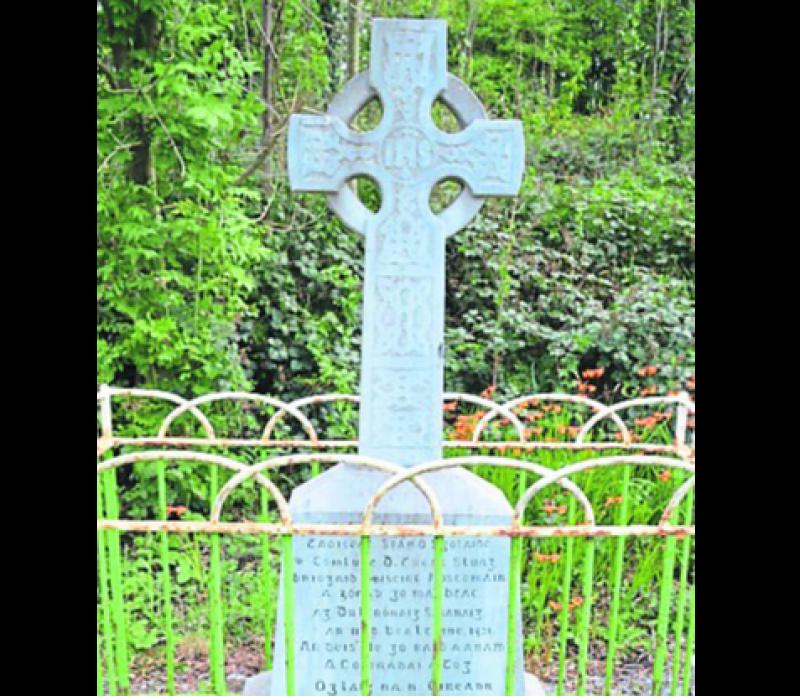 Monument marks the spot where John Scally was fatally injured

One hundred years ago, the War of Independence had reached an upsurge in activity with no end in sight. Ambushes, assassinations and reprisal killings were common events as the IRA and British forces were locked in a guerrilla war.

The 3rd battalion area of the South Roscommon Brigade was an area that stretched from Athleague to the bridge of Lanesboro on the border of County Longford. It encompassed the town of Roscommon and all the companies in between.

A Flying Column or Active Service Unit was formed from the 3rd battalion at the end of 1920 and the same trio of men led this unit.

The officers and men of the 3rd Battalion Flying Column had been very active during the troubled period carrying out attacks on Crown forces.

They took part in ambushes at Fourmilehouse and Scramogue and also attacks on barracks in Frenchpark and Elphin in north Roscommon.

On the road from Roscommon town to the bridge at Lanesboro, no less than four attacks were carried out against the enemy.

The column also ventured across the Shannon, on one occasion in a boat to try and mount attacks on the RIC in Lanesboro.

Their missions proved unfruitful however, as the enemy failed to appear.

In 1921 the British military and Black and Tans were equipped with motorised vehicles and were able to respond fairly swiftly to calls from different parts of the county when under attack.

When the IRA were planning an attack on Crown forces, one of the tasks carried out previous to the assault would be to block all roads leading to the attack site.

From early 1921 the IRA decided to block most main roads throughout the county in order to impede the transport of troops and police.

In the 3rd battalion area the members of the flying column were actively engaged in this process. In some cases stone walls were thrown down along the road and while this was a blockage it could be cleared again in a short time.

Also trees were felled across roads; a few men with a cross-cut saw and axes could cut down a tree in a short time, but again this barrier could be cleared in a few hours leaving the road open again.

The most successful blockage on a road was a trench cut across the full width of the road. Trenches were usually made six feet deep by six feet wide so that no vehicle could pass.

In cases when a trench was cut across a road it would be covered over with corrugated sheets and camouflaged with gravel to look as if the road wasn’t disturbed, this was an ideal trap for a military lorry to run into.

On smaller roads trenches were made in a staggered manner, the cutting would be made just half way across at one point and a few yards further the trench would be cut on the other side.

This was to facilitate local traffic; a donkey and cart could negotiate this obstruction, but a military lorry could not.

If the military or Tans came on a road trench, they would be infuriated and go to the nearest village and order local civilians to refill it, only to find next morning the trench would be reopened again by the IRA.

In the spring of 1921 there was much trenching of by-roads between Roscommon town and Lanesboro.

Traffic was so disrupted in this region that when the police went to serve a summons on a Kilrooskey farmer, “they couldn’t get within a half mile of the place”.

Once when the Tans discovered a trench cut across the road near Beechwood, they went to the local post office and announced that the trench must be filled in by next morning or there would be trouble.

Next morning instead of a filled in trench they found two dead bodies left beside it. The bodies were of two men suspected of being informers.

On May 10, 1921 a trench had been cut across the road at Cloontymullen, about half way between Roscommon and Lanesboro. Later that evening, Crown forces were observed at the site of the cutting and it was discovered that they had back-filled the trench.

A party of men from Cloontuskert Company comprising; Company captain, Johnny O’Connor, Gallagh; Lt John Scally, Gallagh; Johnny Kelly, Moneen and Jimmy Gannon, Weekfield/Coolseachtena, with others began the task of reopening the trench. The work party were engaged in the digging when suddenly there was an explosion.

Unknown to the volunteers British Army engineers had booby-trapped the road fill by setting a Mills bomb in the gravel.
A Mills bomb was a hand grenade with a short delayed fuse and it had been placed in the road material in such a way that when disturbed it would detonate.

The method of putting it there was by removing the safety pin which held the striking lever in place then placing the grenade under a heavy flat stone, the stone kept the striker compressed until it was disturbed.

When the stone was struck with a shovel it released the striker and the men heard a fizzling sound and then there was a shattering explosion.

John Scally received a minor leg wound. All the injured men were transported to Inchenagh Island in Lough Rea, where the IRA had a field hospital and doctors were brought to the island to treat them.

After lengthy treatment the three seriously injured volunteers made full recoveries. John Scally’s leg wound at first didn’t seem severe and hadn’t given the doctors any concern, but the wound later turned gangrene and despite their best efforts, John died from the ailment on May 21, 1921.

John Scally’s body was taken by boat from the island to the Roscommon bank of the Shannon near Annaghmore and taken across country to Kilteevin cemetery.

His comrades had prepared a grave and had him buried there secretly in the dead of night. When the truce period came in July, Scally’s remains were disinterred from the grave in Kilteevin and reburied in the family plot in Cloontuskert Abbey Cemetery.

The funeral was attended by a crowd of 4,000 people. His coffin, draped with the tricolour, was placed on a makeshift gun carriage and taken on the journey to Cloontuskert.

Hundreds of volunteers, marching in military formation escorted the remains to its final resting place.

After the coffin was lowered into the grave, six of Scally’s IRA comrades fired three volleys as a final salute and Fr Michael O’Flanagan, vice-president of Sinn Fein delivered an oration.

John Scally was son of Kate Scally (widow) Gallagh, he was aged 31 years when he died; he was 2nd Lieutenant of Cloontuskert Company of the 3rd Battalion, South Roscommon Brigade. In 1934 a monument was erected to the memory of Lt. John Scally at the site of the fatal explosion at Cloontymullen.