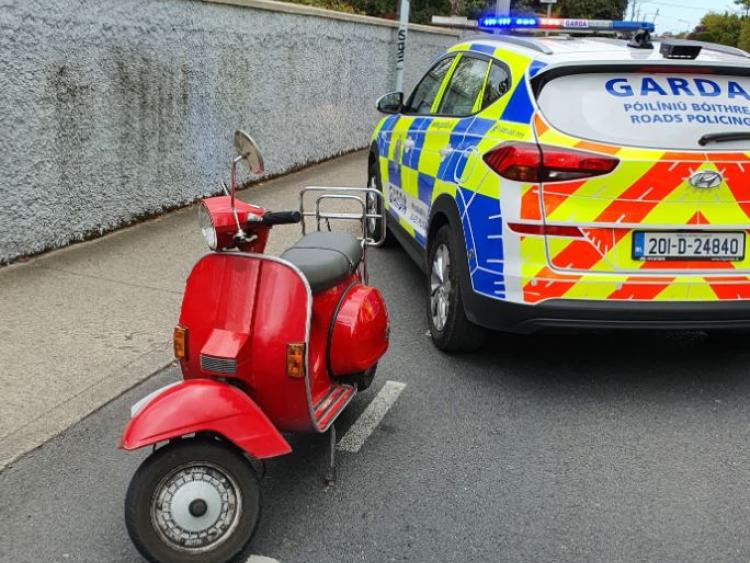 Gardaí stopped this motorcycle in Dublin recently and discovered it had not been taxed for over a decade.

Officers in DMR South Roads Policing came across the vehicle in the Templeogue area.

The motorbike was seized and court proceedings are to follow.

An Garda Síochána and The Road Safety Authority (RSA) recently appealed to motorcycle riders to slow down, ‘ease off the throttle’ and keep within speed limits.

The appeal is being made in response to the high number of motorcycle fatalities seen this year - to date in 2021, six motorcyclists have been killed on Irish roads.

Previous RSA research has shown that bikers speeding is a factor in over a third (34.6%) of motorcyclist fatal collisions.

The message from Gardaí and the RSA is to ease off the throttle and keep within the speed limits and to always wear appropriate Personal Protective Equipment (PPE). Drivers are being urged to watch out for motorcyclists especially at junctions and to check their blind spots.

Garda Adrian Corcoran, DMR Roads Policing, An Garda Síochána, said: "As a Garda motorcyclist and a motorcycle enthusiast I know how enjoyable motorcycle riding can be. However, motorcyclists are one of the most vulnerable groups of road users on our roads. If you are returning to motorcycling after the winter months, please ensure that your motorcycle is in a roadworthy condition. Carry out a walk around check prior to each journey. Always wear appropriate PPE, and Hi-Viz clothing will make you more visible to other road users. Take time to reacquaint yourself with driving your motorcycle and always ride within the speed limits. I would also appeal to motorists to watch out for motorcyclists, especially at junctions and when turning right. The number of motorcycle casualties on our roads so far this year is worryingly high, and we don’t want to see this continue over the summer months. It’s up to everyone to keep the roads safe for all its users.”

Mr. Stephen Murphy, Supervisory Approved Driving Instructor Examiner with the RSA, and expert motorcyclist said: "As motorcyclists we are among the most vulnerable of road users because we have very little protection in the event of a collision. However, we can help reduce our vulnerability by taking some simple steps such as wearing the appropriate PPE and high visibility clothing to make ourselves visible to other road-users. It is also extremely important to show restraint and reduce speed, and never ever ride a motorcycle under the influence of an intoxicant. As we enter the summer months, when we typically see higher numbers of motorcyclists on our roads, I am asking all fellow motorcyclists, to take these necessary steps to protect themselves as much as possible when out biking.”
While motorcyclists are being urged to take extra care on the roads, An Garda Síochána and the RSA are also reminding motorists that they need to watch out for motorcyclists when using the road.
Crash research shows that the four main causal factors that contribute to fatal motorcycle crashes are:

The RSA’s motorcycle safety advertising campaign ‘Signs’ highlighting the dangers of speeding and encouraging riders to be aware of their vulnerability on the road is currently on air during April and is being supported by a series of information videos advising motorcyclists on the four known dangerous manoeuvres for motorcyclists.