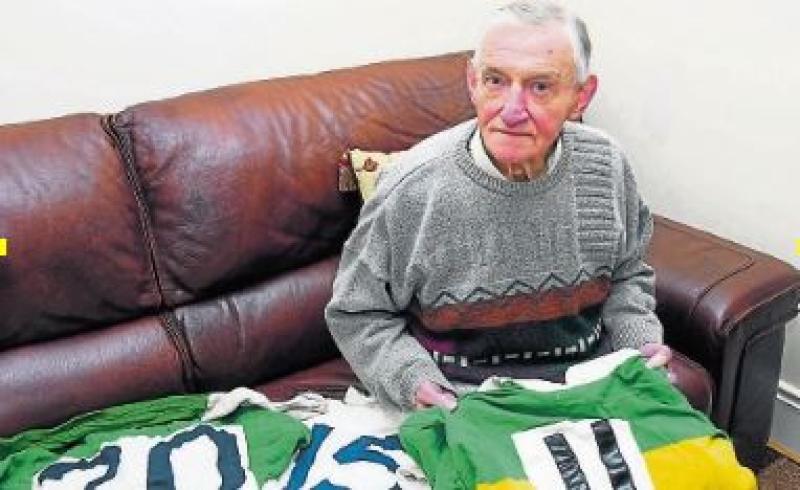 Packie pictured in 2016 with a selection of his Leitrim, Connacht and Ireland jerseys from his remarkable career Picture: Willie Donnellan

For weeks he had anxiously hoped that an English essay title appropriate to his interests and aptitudes would feature in the test.

An excellent English essay would be a passport to a good result. When he saw the title “My Hero” the apprehensive youngster was elated.

The previous year he had watched a Leitrim Gaelic footballer giving one of the finest ever individual displays in the history of Gaelic Games. Packie McGarty was the man who would make the words “My Hero” a living reality for the budding academic.

As a young boy growing up in his native Mohill, Packie was continually inundated with talk of Gaelic football. His father was club chairman and his brother Willie was an established club player.

Their influence, considerable though it was, paled into insignificance compared to the impact that a newcomer to the area had made. Leo McAlinden, an Armagh man who had starred for Ulster in the 1944 Railway Cup final, had come to work in the town.

“I recall vividly Leo’s first game for Mohill. I will always remember his terrific display that day. With his pacy, incisive solo runs he literally ran the opposing Cloone team off the pitch.

"No one in Mohill had ever seen solo running before. He had all the skills, could kick 50’s off either foot straight over the bar and I immediately wanted to imitate him.

"I used to follow him around the town as he went solo running with a shilling piece or an apple up the street. Watching this football artist at work made me decide that Gaelic football was the game for me,” Packie told me when I met him at his Clondalkin home in Dublin some years ago.

So Packie started to play football as often as he could and his skill set rapidly developed. He won his first medals for the Mohill U14 schoolboy team in both 1946 and 1947.

Two years later, in 1949, and only 16 years old, the rapidly developing talent earned the unusual distinction of playing for the Leitrim senior team before he played at County Minor level.

Though beaten in that League game against Offaly he scored 1-1 in a wonderful performance, particularly for one so young. An incomparable career that would span four decades had begun. For the next 22 years Packie McGarty would be an automatic choice for the men in green and gold.

Packie won a County minor medal with his club in 1950 on a team that included Cahal Flynn who was later to form a “terrible twin” combination with McGarty on Leitrim and Connacht Railway Cup teams. Packie was the star of the Leitrim Junior County team which reached the 1952 All Ireland final only to be beaten by Meath. Incidentally his boyhood hero, Leo McAlinden, was also on that Leitrim Junior side. Alongside him on that day also was another star club man Eddie Rowley. Both were destined to feature for many years together for club and county.

Packie’s best days preceded the All Stars Awards and many of the phenomena of modern day football such as team managers, psychologists, hamstring injuries, dieticians, physios, iced baths, statisticians, strength and conditioning, warm downs, or bonding weekends. In his playing days he and many others required no gym work - manual labour did the trick. Packie’s muscles were well toned hoisting ESB poles around the Donegal mountains, later on the building sites of London and working with Roadstone in Clondalkin, the Dublin suburb in which he eventually opened up a supermarket and where he set up home with his wife Ellen and family.

For four years in a row in the 1950’s Leitrim and McGarty lost four Connacht finals to a great Galway side who went on to win the 1956 All Ireland Senior final. What made all GAA followers of his playing era speak in such glowing terms about Packie McGarty I often wondered. To get a definite answer to that pertinent question I asked several long time Leitrim supporters and opponents who played against him. The consensus was that he had all the skills. He could field like Willie Joe Padden, solo like Iggy Jones, take frees as per Jimmy Keaveney and inspire a forward line like Peter Canavan.

As a 19 year old he was picked on a Connacht team that included such household names as Sean Purcell, Padraic Carney, Gerry O’Malley and Sean Flanagan. On that particular occasion he ran rings around Jas Murphy of Kerry, scoring 1-4 in the process before 20,000 spectators in Tralee. McGarty was destined to give many other outstanding displays both for county and province during his playing career.

Though small in stature he was big in performance as was evidenced when he helped Connacht to three Railway Cups and starred for Ireland on three consecutive occasions against the Combined Universities.

His greatest hour is generally acknowledged to have been the 1958 Connacht final against Galway. Though nominally listed at centre half forward he made himself available all over the field but especially in the general midfield era. With radar anticipation he seemed to own the ball that day. Wherever he went the magical leather was drawn to him. Time after time, he soloed fearlessly through the heart of the Galway defence, earning frees which the ever reliable Cahal Flynn duly pointed.
Leitrim supporters to this day maintain that glory days would have come in 1958 had the talented Eddie Rowley not emigrated and had Joe Bohan, Paddy McTague and Mike Dillon - the star half back line of the Leitrim Club in New York - not emigrated a few years previously. As it was, Leitrim were decidedly unlucky to lose by two points in this final which is always fondly referred to as the Packie McGarty final. Leitrim may have lost but never did one man do so much to further the cause of his native county.

The National League of 1958/59 saw Leitrim qualify for the semi-final against Derry. However a bad Leitrim defence where only Eddie Duffy and Josie Murray played up to their usual high standards allowed Derry star forward Sean O’Connell to notch 2-2 and achieve victory eventually for the Oakleaf men. Thus ended Leitrim’s quest for glory.

Leitrim and Packie reached further Connacht finals in 1959 and 1960 only again to suffer the fate of the vanquished. Four successive finals and four defeats for McGarty and Leitrim. For eleven more years Packie McGarty played for Leitrim, reaching another two provincial finals in 1963 and 1967, again experiencing defeats to Galway and Mayo respectively.

In 1971 Packie, at the age of 38, played his last county match. One of the longest inter county careers of all time had come to an end. No league or championship medals adorned his cabinet but a host of marvellous footballing memories and enduring friendships have stood the test of time.

Packie McGarty was and is undoubtedly the greatest Leitim footballer of all time and one of the truly national icons also. Some amazing statistics back up these simple but truly extraordinary facts.

To understand fully the tremendous impact that Packie McGarty made on GAA followers for so long one has to accurately translate the following apocryphal story as narrated by one of Leitrim’ most popular and long serving GAA officials. At the end of a concert, at which he was a compere in 1990, Tommy Moran asked his audience what was the first question that Nelson Mandela asked when he was released from prison having been incarcerated for 27 years. After dismissing some supposedly political and social answers to his rhetorical question, the witty raconteur from Ballinamore stated.

“You are all wrong. To the world’s assembled press he simply said. Can anyone tell me is the great Packie McGarty still playing for Leitrim!!??”

That young Carrick on Shannon schoolboy of 1959 chose very wisely when he decided to write about Packie McGarty. Today that youthful scribe, popular Longford GP Mel Gorman, has just completed over 40 years of top class medical care and support for countless hundreds of patients in the Midlands town and beyond. For the past 60 years he has been one of Leitrim’s most loyal and enthusiastic supporters.

In March 2019, Mel officially retired from his GP practice. However, he has not retired from following his beloved Leitrim.

One can say with a firm conviction that Mel Gorman and all those others who have followed Leitrim over the years are proudly carrying that torch of loyalty so firmly espoused and so emphatically practiced for so long on the playing fields of Ireland by its greatest servant the irrepressible and indomitable Packie McGarty.