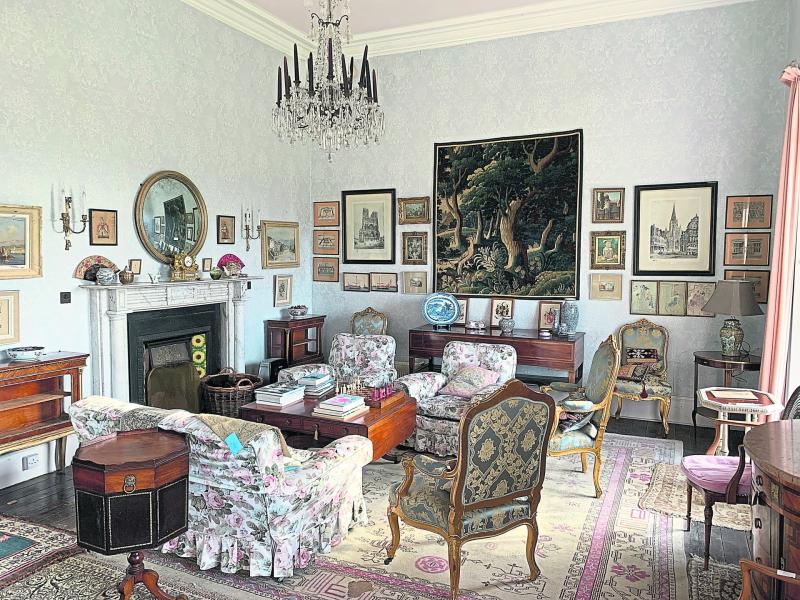 The drawing room at Belmont House, Cullahill, Co Laois. The contents auction takes place from Wednesday to Friday, February 3 -5 and the auction catalogue can be viewed online at www.sheppards.ie

Intricately woven carpets from the hands of Tibetan refugees living in the foothills of the Himalayas; Kashmiri silk wall hangings; an antiquarian barleycorn bone chess set and metal figurines from the Bastar region of India are just some of the wonderful pieces which will go under the hammer at Sheppard’s Irish Auction House this week.

The sale of the contents of Belmont House, Cullahill reflects the rich history of a family which left the West for an adventure in India in the 1960s.

David Gibbs, became Rector (headmaster) of the illustrious St Paul’s School in Darjeeling in 1964 and remained in India for nine years, along with his wife, Sally, and their three children, Lucinda, William and Alexander.

Auctions have a way of forcing people to bear their souls. The family would love to keep more of the pieces but have no room for all of the wonderful collection of antiques, antiquities and curiosities, following the decision to sell Belmont.

As you approach Belmont House you are struck by the Pagoda-like feel to the one-storey cluster-columned entrance which rightly entices you into thinking that you are entering a world with an eastern orientation. Not a surprise when you learn that David Gibbs was great friends with Tenzing Norgay, the Sherpa who with Sir Edmund Hillary reached the 29,035-foot summit of Everest on May 29, 1953.

David Gibbs, OBE
David Gibbs, was awarded an OBE for his services to education in India. He passed away in June at the age of 93, having spent the last 32 years at Belmont, a house full of pieces from his and his wife Sally’s time in India and elsewhere.

Belmont House contents auction takes place from Wednesday to Friday, February 3 -5 and the auction catalogue can be viewed online at www.sheppards.ie