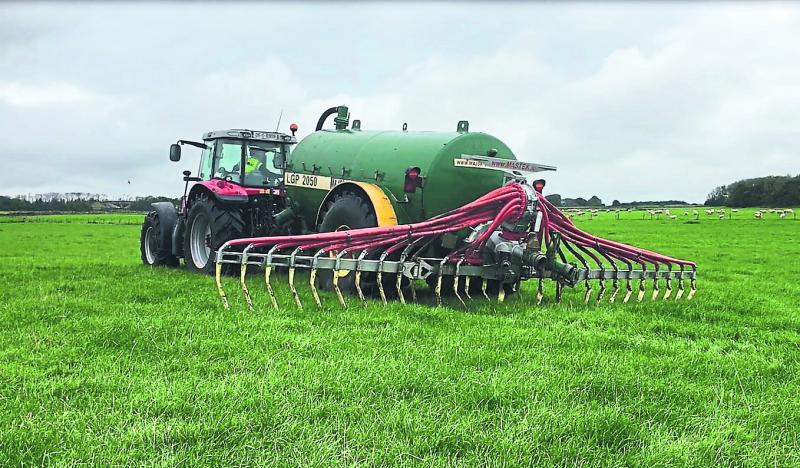 LESS (Low emission slurry spreading) technology has become ever prevalent in recent years with its inclusion in schemes such as GLAS and TAMS, and now it has been made mandatory for use in farms under nitrates derogation from January 2021.

As well as this, the most recent derogation review saw an increase in the organic nitrogen excretion rate of a dairy cow from 85kg N to 89kg K per cow, which will push some farms closer to the 170kg N/ha limit.

Around 33% of greenhouse gases in Ireland have been attributed to agriculture, as well as 98% of ammonia emissions. LESS is a method of applying slurry to land that reduces the amount of loss of nitrogen as ammonia during the application process with the use of a trailing shoe or dribble bar.

In both cases the slurry is spread close to the ground using injectors or pipes, as opposed to the traditional splash plate. A cost saving effect has also been proven, as a spring application of 3000 gals/ac (33m³/ha) using LESS can provide an extra 23kg N/ha, saving €20 per ha in chemical fertiliser.

Under the new Ag Climatise road map launched on the 9th of December, it is also planned that 90% of slurry should be spread using LESS technology by 2027. LESS is also an option for certain parcels under GLAS, which will be rolling over to 2021.

There is an option in TAMS (Targeted agriculture modernisation scheme) to purchase LESS equipment.

Either 40% or 60% of the cost excluding VAT is covered by the grant depending on your young farmer status. Minister McConalogue has recently announced the closing date for tranche 20 of the TAMS scheme has been extended from 31st December until mid-January of 2021.

The equipment must be either a dribble bar (or band spreader), a shallow injection attachment, or a trailing shoe (trailing foot).

This is a very efficient bit of technology that has many different benefits, and we will certainly be seeing more of it in the coming years.

Teagasc provides a Local Advisory and Education service to farmers. They have offices based in Roscommon Town (Tel: 090 6626166), Castlerea (Tel: 094 9620160) and Longford Town (Tel: 043 3341021), You can find us on Facebook @Teagascroscommon longford, twitter @teagascRNLD and YouTube. Follow the hash-tag #RNLDwebinars for information about local farm webinars. Email; RoscommonLongford Advisory@teagasc.ie