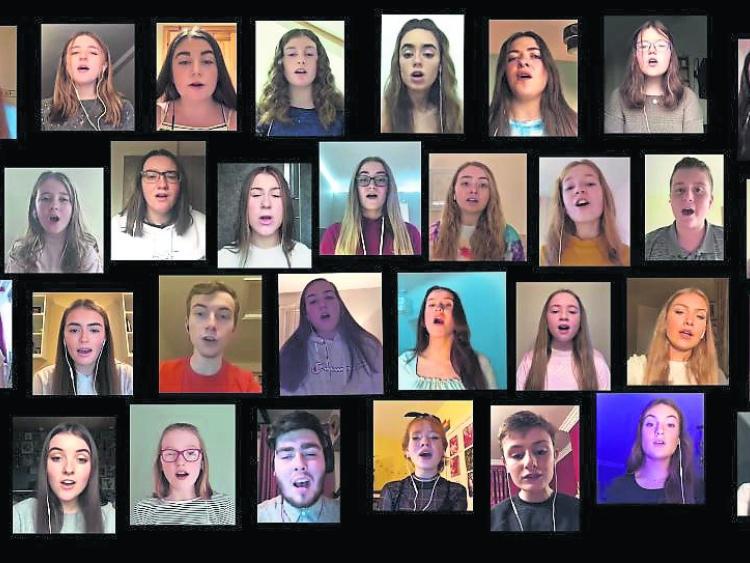 Evolution Stage School students in their recent 'Keep Holding On' video, recorded 'at home' on their phones

Covid-19 has been particularly difficult on the arts, with theatres, cinemas and other entertainment venues shut down due to harsh restrictions.

But Evolution Stage School has really taken the new virtual method of teaching in its stride as zoom classes took over.

“We started teaching online back in March when the first lockdown came. We couldn’t do any classes, so myself and Tracey (Carty) started doing online classes,” said Paul Hennessy of Evolution Stage School.

“The amount of students that came on and did zoom classes was great. We reopened in September for a few weeks with split classes over two days and with strict rules and it worked well.

“But when we were closed again we decided to go back online. We’re hoping to open again in January but we’ll do a few more weeks on Zoom.”

There have been a number of fantastic events held on Zoom for the young people who attend Evolution Stage School, such as a Christmas jumper day, or a Christmas pyjama morning, which took place the morning after the Late Late Toy Show.

“The commitment on the Zoom classes has been incredible. We have a lot of workshops going on with people from the Westend that Tracey and I know. We’ve also teamed up with the Performing Arts Academy in Cavan to deliver workshops and we could have 60 to 70 kids at each one,” said Paul.

“It’s amazing and the kids learn so much. It’s something different to the usual classes. And the kids are really coming out of themselves a little bit more on Zoom. I suppose when they’re taking part from the comfort of their own homes, there’s no intimidation from the big classes.“Zoom is not ideal for singers but they just come on and put their hand up to sing and it allows them to express themselves a bit more.”

Providing an outlet for young people to express themselves through music and dance is extremely important, especially during a pandemic when the opportunity to meet up with their friends is no longer there.

For that reason, parents of the young people attending online classes have been extremely grateful to Paul and Tracey for making sure there are always opportunities to perform.

“The connection we have with the kids in a class is amazing. We’ve only seen them in person for three weekends since March and that’s it,” said Paul.

“But it has been good fun to see the kids come on. And the last few week’s it’s been great fun because we’ve been gradually seeing Christmas trees going up in the background.”

As is common with technology and the internet, there are often difficulties with internet connections, so live Zoom classes simply don’t work when the internet is bad.

For that reason, each class is recorded and available for students to watch again, without having to worry about streaming it live.

Paul and Tracey have also been challenging the students to get involved in collective video performances, many of which can be seen on the Longford Leader website.

“We have about 30 videos with the kids from home, where they all record themselves singing and send it to me and I put it all together,” said Paul.

“It’s challenging but it works out great and we have had a huge response to some of them. But we’ve also started doing loads of other stuff that we’ve never done.

“We’ve even started doing monologues. We put stuff on the web and the kids video themselves doing it and I share it on the Zoom calls and everyone claps.

"And there are kids doing the monologues that probably wouldn’t put their hands up to do something like that in class, so it’s great to see them grow and come out of themselves.”

Paul is hopeful that Evolution Stage School will be back up and running for physical classes in January but said it’s great to have the kids being constantly busy and constantly engaged.

“It’s important to see the silver lining. You have to be positive,” he concluded.