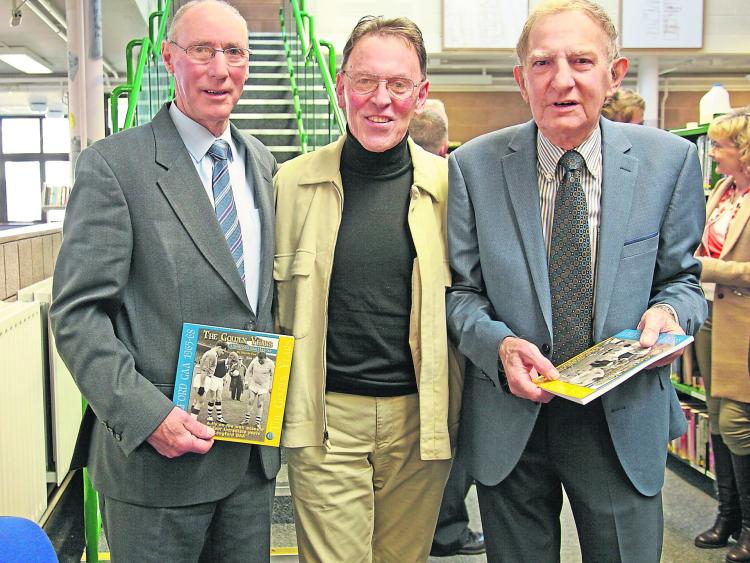 Ballinalee’s Mattie Fox is a man with many strings to his bow and in the midst of this second Covid-19 lockdown many people have logged on to and dipped into Matties Rattlebag for some insightful commentary and opinion.

A highly regarded former columnist with the Longford Leader for over seven years, Mattie, with some technical assistance from Iain Cheyne, has established and launched his own website www.mattiefox.com.

And it is from this platform that people can read and dissect his analysis of politics, rural life, religious affairs, GAA and music and much, much more.

Mattie’s audience can share their views with him via email on info@mattiefox.com and with a little smile and glint in his eye, he reveals, “I appreciate the feedback, good or bad! I genuinely receive an embarrassing number of comments every week.”

Following some gentle persuasion from former Longford Leader Managing Director and now Teachta Dála, Joe Flaherty, Matties Rattlebag emerged in 2013. “Joe Flaherty takes credit for the name. I think it’s perfect for what I do. I try to comment on a bit of everything.”

Mattie explains, “I’m writing for all those people who were constantly being complimentary about the writings in the Leader.”
He publishes his column on www.mattiefox.com, weekly, every Wednesday at around 1pm.

Visitors to Mattie’s website will be familiar with the quote: ‘If ever you want to give God a good laugh, start telling him your plans for the future’. Why does he use it? Mattie says, “Well, it seems to be perfect at this time, and maybe a little humorous. Who’d have thought we’d be in lockdown back in January?”

Steeped in GAA, Mattie is a deep thinker and a shrewd judge of gaelic football. He’s immersed in his home club, Sean Connolly’s, serving as coach and initiator of fundraisers, and he served as selector with the Longford and Westmeath inter-county senior sides when Denis Connerton and Brendan Hackett, were the respective managers.

Mattie quips, “I spent a lot of time in my growing up years preoccupied with the Longford team. They were as good as any team in Ireland.”

Kenagh’s Liam Mulvihill was GAA Ard-Stiúrthóir from 1979 until 2008 and Mattie suggests the transformation of Croke Park into the stadium it is today was the most seismic change he’s witnessed in the GAA.

“I watched the rebuilding of Croke Park - with another Longford man driving it on. He was Director-General and knew his place. Willie Mulvihill was an absorbing and passionate man. I knew and know him quite well, nice man.”
In April 2016, Mattie’s book ‘The Golden Years - Longford GAA 1965 - ‘68’, was launched by former inter-county star Paul Barden.

Longford captured the National Football League Division 1 title (1966) and Leinster Senior Championship glory (1968) and Mattie recounted, how as a 15-year-old, and courtesy of his late father Matt (who was Longford GAA Co Board secretary at that time), he was privileged to have a ‘ringside seat’ to witness Longford’s greatest ever victories.

He says writing the book ‘was a great experience’ and he was ‘glad to do it’.

Is he considering a second publication? “I’m always thinking about something. That’s nature.”

Will Longford ever savour the same success as they did during the sixties? Mattie replies, “Honestly, I don’t think that will ever happen again. The GAA has become too elitist and that’s the truth - it’s nothing to do with how I feel about the association.

“I love the GAA, and can bore you with all the great things they do, but regrettably, we now have the GPA, being sponsored by the GAA, simply because the GAA in the first instance, were too frugal with giving players anything they deserved. I think that circle has certainly been closed, but has become unbalanced, to a dangerous degree.”

Rewind to the sixties, he reflects, “The whole Longford success never reached its full potential, but that was then, and not much point in bringing it up again. They were great people, almost all that panel and deserved more success.”
Fishing and drawing are also among the many things Mattie enjoys, however, and unsurprisingly, music is his ‘number one’ interest and hobby, adding, “My tastes have become different as time moved on with different experiences over the years.”
Who are his favourite artists? “My favourite artists in the world are people like Merle Haggard, Tammy Wynette, Waylon Jennings, Tom T, Dusty Springfield and Bobby Bare but I do really love other singers.

“Frank Sinatra is someone I listen to a lot, maybe endlessly in fact. Never does a month pass but I can return to Sinatra and hear something new. Pavarotti was incredible and had magnificent focus, a great vocal. Nailed every song.”
Mattie was an accomplished performer himself and his singing talent ensured he became a household name during the 70s.
With the Country Boy Blues, he released a couple of singles, ‘Does My Ring Hurt Your Finger’ and ‘Crystal Chandeliers’. Both featured in the pop charts. Mattie also featured in The Grassroots, Country Pride (alongside Margo) and Misty.

He says, “My time with the showbands was a learning experience. It went past like a high octane forward flash. With hand on heart, I cannot remember much of it.”

Linking up with the Country Boy Blues, music gurus, at the time, wrote that Mattie was ‘stepping into the shoes of Larry Cunningham’. How daunting was that or was it ambition fulfilled?

Mattie replies, “In those days, I was in fact pathologically shy, and it was amazing to step into the same band. But the learning I received has stood me well.

“We had huge crowds for a while, then the band business seemed to begin declining. I’d have to say that, looking back, it wasn’t a nice time.”

Mattie also managed many music acts. “I became lucky after I left Misty. I began booking out Matt Molloy - a bit of a departure but then I could indulge my real taste. He toured with Mick Hanly, and the word sort of went around the business, possibly laced with surprise that I could put a tour together. Matt & Mick were a fabulous act, in the genre of real Irish music.

“By extension, I called Christy Moore one day about Moving Hearts, I hired Longford Arms from Jim Reynolds and put them on. It was a very successful concert.

“Soon I was managing Christy and then I had Planxty on tour a few times. Everything, really, sort of happened. I used to represent Tom Paxton in Ireland, and stuff like that, and organised tours with the Chieftains and Mary Coughlan.”

There’s enough there for a second book I suggest, “We don’t have time to 'tell all’ but that’s the jist,” comes the response.
Mattie and his wife Nuala have coped well with the pandemic restrictions. “I genuinely have no problem with it at all. We live here in Ballinalee, and barring shopping and walking or cycling for exercise we don’t move out. Simple.”
His take on the Government’s handling of Covid-19?

“The pandemic is not going away anytime soon. The real problem is the border, it’s farcical what’s going on. The government has too many of its own briefing against the government to which they belong. I cannot understand it.

“Well, of course I do understand it, but nobody should be playing politics at this time. Mind you, it’s worth noting that Verona Murphy has cut her salary to PUP level to show solidarity with those suffering. I’m sure that will lead to a lot of TDs following suit! It’s a great pity that nobody in Dáil Éireann has the humility to do the same.”

His views on our tripartite Government? “Because of the fractured nature of Government, I really don’t feel it’s all together. I think they spend a lot of time tweeting, and texting.

“It was always going to be strange once Sinn Féin weren’t even talked to. That was a big mistake. Doesn’t necessarily mean they’d end up in government, but it meant that they were rightly included in talks.”

Would Mattie be concerned for where we will be as a nation in 12 months time?

“I would be very concerned.”

* Check out Matties Rattlebag every Wednesday on www.mattiefox.com