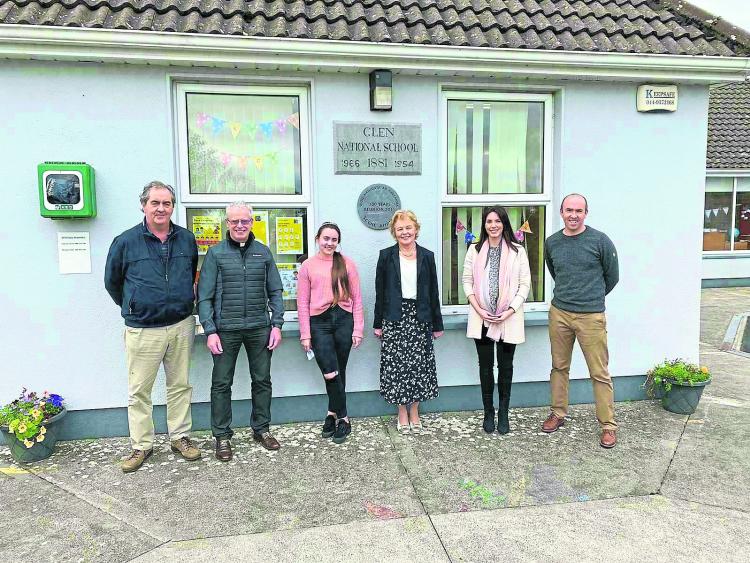 After 40 years of service as a teacher, 30 years of which were in Scoil Bhríde Glen, the school Principal, Ann Marie McLoughlin retired on Friday, October 2.

Whilst every observance was made to the current climate of social distancing the school celebrated the last day with Ann Marie, deputy principal Michelle Donoghue, school staff and her three children, Éilish, Seán and Áine.

Fr Vinny Connaughton, chairperson of the Board of Management started and concluded proceedings with a prayer and words of kind sentiment to a long- serving and deeply respected Principal and member of the community.

The pupils in both senior and junior classrooms performed items of music and poetry and shared memories of Mrs McLoughlin, which were included in a booklet to be savoured at a later time as there were so many items that not all could be recalled in one afternoon.

Much thanks to Enda Seery who arranged the musical pieces with the senior classroom pupils who performed on tin whistle, button accordion and concertina and also to valued visiting teacher, Eamonn Brennan for joining the celebrations.

There was a poem recited in the junior room by the second class and a whole-class inclusion for a song in Irish with actions which was performed impeccably after much practice with class teacher, Rachel Byrne.

Excerpts were read from a book whose inception came from Mary Lyons and was filled from cover to cover by local families and community members, past staff, politicians and visitors to Glen as well as other teachers locally who were delighted to pass on their best wishes for Ann Marie’s retirement. There were some fantastic photographs also included which Ann Marie can look over at her leisure in the coming days and weeks.

For those who could not be with Ann Marie but who would have been known associates and friends back to her own times of school and college, a video message from each was collated and played on the interactive board by MC for the day, Neil McDermott, SET teacher.

A guard of honour was formed outside to end the days events whereby parents and past pupils gathered to wish a final farewell to a fabulous school Principal, valued class teacher, respected community member and to very many present, a true friend.

Gifts were presented from the Board of Management and staff as well as the Parents Association and Glen After Care.
The day was uplifting and memorable. Ann Marie McLoughlin will be missed for a very long time but consensus of opinion wishes her every happiness and good health in her retirement years.