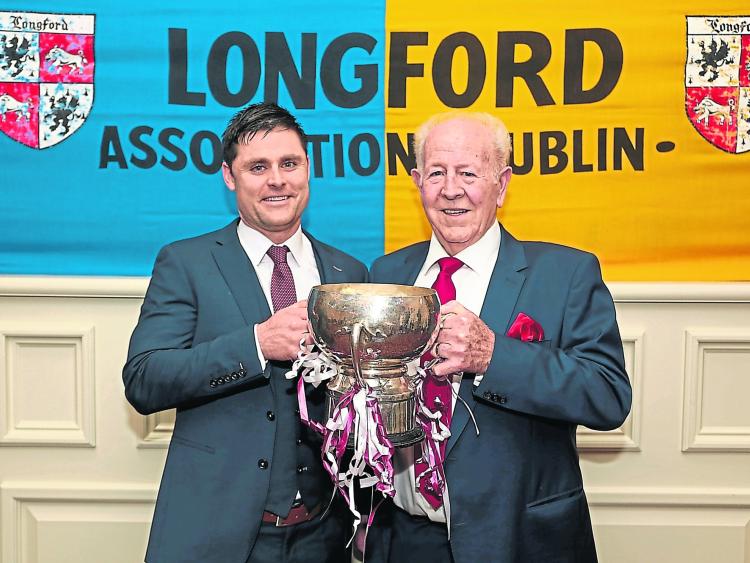 The late Pat Cunningham (right) pictured Mullinalaghta captain Shane Mulligan and the Connolly Cup, presented to the winners of the Longford SFC

The recent death of Pat Cunningham on Tuesday, August 25, sadly removes a long-standing and much respected committee member of the Longford Association in Dublin.

Pat joined the association in 1978 and has been a constant presence ever since, serving in many roles over the years, and was in recent years honoured with the title and role of Life President.

A proud Mullinalaghta native, Pat was a man of diverse lives. He was a member of An Garda from from 1963 to 1998 and retired with an unblemished record.

Policing in the capital city was never easy, but in those early years it is probably fair to speculate that being a garda wasn’t quite as dangerous in the city then as it is today, notwithstanding the impression conveyed in a recent TV programme on the legendary Sgt Jim Brannigan.

The garda were respected and looked up to in those days, but nevertheless the role had to have its challenges, as that programme showed. Indeed Pat, with his essential decency, calmness and collectedness would thrive even in these more difficult times for gardai; one could imagine him, with his fine, impressive stature and unthreatening presence, restoring calm with ease.

The city centre and its environs were his beat, having begun his career in Mountjoy station and following that he spent most of the rest of his career in the Bridewell. After his retirement from the garda, Pat continued his working life in property management and indeed was working in that role up to three years before his passing.

Another of Pat’s lives centred on the GAA – he wasn’t just a follower, more a fanatic in the best sense of that description. And naturally, under his particular circumstances, he had to have divided loyalties between his home club, Mullinalaghta, and Erin’s Isle, his adopted club.

I doubt if Pat’s support was exactly fifty fifty until later when he probably leaned a little more towards Erin’s Isle as his son, Padraic, or Paudge as he was known on the field of play, played a leading role in the fortunes of the city club in the 1990’s - alongside such stars as Charlie Redmond, Keith Barr and Mick Deegan.

Erin’s Isle seniors contested five Dublin County finals in a row from ’93 to ’97, winning in ’93 and ’97 which was their standout year, going on to win the Leinster Final. And following on from that they competed in the senior clubs All-Ireland Final in Croke Park on St Patrick’s Day 1998 and were unfortunately beaten by Corofin from Galway.

Current chair of Erin’s Isle, Paul Campbell, said “Paudge was a key member of the team, playing both half back and half forward positions.

He was a physically strong player with a great engine and a good left foot”.

Padraic played minor for a season with Dublin county team in the late 80’s and would have been a “shoe-in” for the u21’s but for Dublin suspending its participation in that competition.

Those must have been proud years for Pat with his son, Padraic, having played such an important role in the success of his city club. Padraic recalls his father holding the Leinster trophy in ’97 when someone close by remarked “Pat, the next time you hold that trophy, Mullinalaghta will be the Leinster champions”.

How prophetic! In 2018 Mullinalaghta achieved what seemed impossible for a small club in North Longford, winning Leinster in 2018 and gave Pat that second glorious opportunity, twenty one years later, to get his hands on that much-coveted trophy.

The Longford Association marked Mullinalaghta’s success by presenting the club with its main award at its final annual dinner last year. Pat was proud of that decision, to which he was central, and he had the honour of making the presentation to Mullinalaghta’s Chairman John Keegan.

And two years before that in 2017, the Longford association, at its 63rd annual dinner, presented the captain of Mullinalaghta seniors, Shane Mulligan, with an award to mark the team’s outstanding achievement in winning the Connolly Cup in 2016 after a long hiatus of 66 years.

They went on to win in 2017 and 2018, leading to the top in Leinster which had the whole country talking, and leaving Pat with wonderful memories.

Pat and his wife Anna loved the social side of the Longford association – the annual dinner and the Summer and Christmas nights out.

These were memorable nights and comedian Noel V. Ginnity was a particular favourite of Pat’s. And the occasions on which their granddaughters, Niamh and Ciara, both dancing prize winners, gave stunning displays of step dancing at our annual dinner were especially proud for Pat, and little wonder; they were both outstanding.

Poignantly, but also happily, a short time before his death Pat and Anna got to celebrate their 55th wedding anniversary down in Mullahoran along with their family. On their way back to Dublin after the celebrations, Pat told them “I really enjoyed today”.

At his funeral mass in Finglas church, main celebrant Fr Mick Reilly, a native of Ballina Co Mayo and a longstanding friend of Pat and Anna’s, described Pat as one of nature’s gentlemen and a kind and gentle soul. “His life was a gift to many and to God”, he concluded. No one who knew Pat could possibly disagree.

Pat’s ashes were intered recently in his beloved Mullinalaghta, where his heart always remained. Mass was celebrated in Mullinalaghta church by Fr Seamus Connell, vice president of the Longford association and a close friend of the family, followed by the interment in the local nearby cemetery.