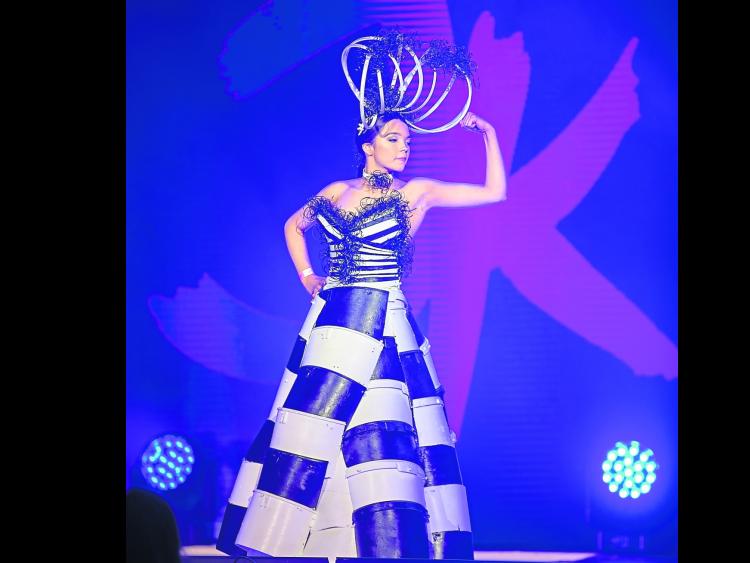 It will be lights, camera, action for Cnoc Mhuire Granard students, Aoife Leonard, Emma Dalton, and Ella Mulligan, this December as their creation, Bucket List, is set to feature in the 2020 Junk Kouture final, which will be broadcast from Dublin on the RTÉ Player in a carefully socially-distanced final hosted by RTÉ 2FM presenters Laura Fox and Emma Power.

Junk Kouture 2020 was sadly disrupted by the outbreak of Covid-19 in Ireland and the grand final in the 3Arena postponed in April.

Celebrity judges Michelle Visage and Louis Walsh will also be back on hand to help choose the over-all winner, in what promises to be an incredible display of haute-couture and high-energy performances.

A public vote for a brand new award will also take place on the night.

The Cnoc Mhuire Granard design is made from buckets and represents achieving one of their ‘bucketlist’ goals: taking part in Junk Kouture.

The white parts of the dress represent the good things that happen in life while the black coils on the bodice represent the journey of life that sometimes has its twists and turns.

Junk Kouture now has plans to take on the world as it expands globally after ten incredible years of empowering young people to create high-end couture from everyday junk.

Capturing the imagination of 100,000 students in Ireland to date, a decade of design prowess on a national stage has led to plans to grow Junk Kouture into a World Tour that spans the world’s seven continents between January and August each year and culminates with a World Final at the end of September.

Junk Kouture’s World Final has the ambition to become the Eurovision of young sustainable fashion and creativity, as the world’s youth gather to showcase their creative skills.

Junk Kouture’s World Tour will build momentum over the next three years. Beginning in January 2021, the initial season will take place digitally in five new cities: London, Milan, New York City, Paris, and Dubai, before adding further digital shows in Tokyo, Auckland, Sydney, Sao Paolo, Los Angeles, Cape Town, and Singapore in 2022 and then transition back to a full live tour with shows being hosted in some of the most iconic venues around the world as we return to pre-Covid normality.

Next year sixty finalists – ten each from Ireland, the UK, Italy, America, France, and the UAE - will compete in the Global Digital Final. There will be one winner from each territory while one talented designer will be crowned ‘Junk Kouture World Designer of the Year’. See our website for more details on the other amazing awards up for grabs.

Negotiations are currently underway with a global iconic city to host the World Final over the next 10 years. Now the winners from Ireland will go forward and compete with likeminded individuals from all over the world, offering an opportunity for teenagers and putting sustainability and creativity on a global platform.

In the meantime, stay tuned in the coming weeks for more updates on our 2020 final, our international expansion and the big reveal of our brand-new international judging panel.