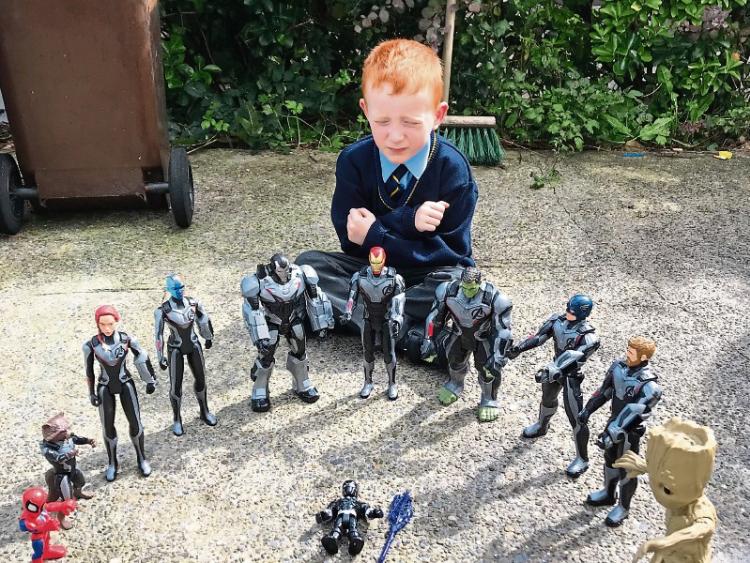 Ollie Gribbin, 5, who started junior infants in Limerick holds an action figure memorial in his yard for Black Panther star Chadwick Boseman who passed away

WHILE most people’s treasured first day at school photo is framed by their front door - one County Limerick boy’s touching keepsake shows him with a memorial to his favourite action hero actor, who passed away within hours of him starting big school.

Ollie Gribbin, 5, is pictured sitting in the yard of his home in Patrickswell surrounded by an action figure memorial for Black Panther star Chadwick Boseman. The world-famous actor passed away on August 28 after a four-year-long struggle with colon cancer.

Ollie, who started junior infants at Patrickswell NS on August 27,  is an Avengers superfan and idolises the Marvel superheroes. He has Avengers wallpaper in his bedroom and matching curtains as well.

At his tender age, Ollie can’t quite comprehend the actor’s passing.

“He makes a little sad face. In the movie Black Panther dies but he doesn’t really die - he comes back again and Ollie thought that is what happened to him,” explained Ollie's mum Amy who is originally from Kilmallock.

In the memorial Ollie has placed the figurine of Black Panther lying down with his sword in the centre surrounded by other superheroes. “He got a set for his birthday from his nana from the latest movie, Avengers: Endgame so some of the figures are from that set. He had Black Panther anyway and Spider-Man and Groot - the tree-like creature. Ollie would have watched all of the movies,” said Amy.

In Marvel Studios' Black Panther, Boseman played the king of the fictional African nation of Wakanda and that is what inspired the pose Ollie is doing in the photograph. “They all say Wakanda Forever with arms across their chest like that,” said Amy.

The touching photo of young Ollie has already received a huge response on social media since it was tweeted by the Limerick Leader. It even moved some people to tears.

“There may be something in my eye,” tweeted Alan Caulfied in response to the image when it was published.

“People were saying it to me about the photo when I was going up to the school this morning,” smiled Amy who works in the Woodlands House Hotel in Adare. Her husband Jonathan meanwhile, works in Spar in Kilmallock. Ollie has two sisters, Éabha who is 11 and in sixth class and Georgia who is six and is in first class.

And how is Ollie getting on in school?

“He’s absolutely flying it,” said Amy. “Ollie was born premature at 27 weeks. He was only two pounds twelve ounces. He has had a rocky road but you wouldn’t see a sign of it now.

“He was in and out of the Children’s Ark nearly once a month until he was three. Then he went off to playschool at three and thankfully he hasn’t really been sick since. And to see him going off to school was great. We always called him our own superhero from when he was a baby.”