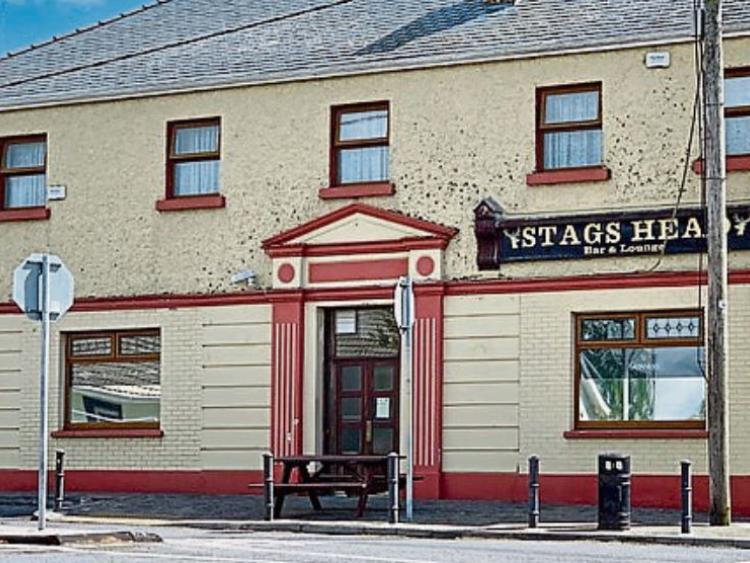 The Stag's Head in Ballinalee

Ballinalee sees the end of an era, as the Stags Head is for sale.

Throughout my lifetime, that great building (pictured) on the corner of the crossroads was a landmark in Ballinalee.

Owned by the Reynolds family, it was iconic.

In 1921 Black & Tans burned the building causing irreparable damage. Rebuilt by local master craftsmen the Daltons in 22/23.
In those days it was known as The Hill Bar & Cabin Lounge, and also traded as a shop.

Johnny Cahill, from Ballinalee himself, was the resident barman when I was growing up. A loyal, humorous, and faithful gentleman, he was very popular among the locals.

My own mother also worked there as a girl before she got married.

In the course of its existence the name changed to The Stags Head, and in 1991, Jerome Reynolds formally became the owner.

Since then it has been one of the great pubs for the years since. Still is.

In recent times, like all public houses, it’s had to react to the times, and doesn’t open nowadays until early evening.
“The Stags Head”, an attractive building, I have dreams of some young couple making a great go of it, because of its potential.

Always a well run house, along the lines learned by the owner, in those most important, youthful, early years.
Every single night, religiously, the bar was cleaned, glasses polished, floor left spic and span, before contemplating going home.

Pubs are more than just a place to buy a drink, they are also social centres.

Over the years I can remember the toys on display at Christmas, in Reynolds’ window. Toys that any child would want.
I often looked in envy through the glass gazing at the marvellous images that were almost within reach. Nowadays you might see the likes in Arnott’s or Harrods.

The changing of the guard, comes to every business.

A reminder that some of us are in our autumn years; others are beginning to grow up; many are still infants; the population around Ballinalee - like everywhere else - is changing slowly all the time until one day you wake up and a whole horde of new people are living in the area.

Ballinalee nowadays is a different place than when the Stags Head was in its full blown busy times.

There was a smaller population back then, yet more locals seemed to be drinking. This is a sort of mirage of course.
More alcohol is consumed now than ever before in Ireland.

The pub trade is changing just like everywhere else, and it demands energy and creativity to make a premises buzz now. For anyone with these qualities this is a great opportunity.

I have no doubt this establishment is ripe for reinvention......

Cost of our politicians is hard to justify

Leo Varadkar is no fool. He is a well educated, intelligent man.

Therefore it was a bit ominous to hear him briefing against his own government on the evening just before the cabinet meeting to decide on the travel strategy. That was rather sneaky. He waited until just before the main news on RTÉ to issue a statement.

Mind you, he didn’t come out and flag the proposal to ensure three ‘super juniors’ - Ministers of State who sit at Cabinet - receive a €16,288 supplement.

That was intended to be executed quickly.

Fianna Fáil’s Michael McGrath never heard of his party’s objection to the raise back in 2016, until he was shown a document recording the fact. Oops.

The government could give an extra €38,787 to Junior ministers, and even had to adjust legislation so it was legal.
Yet no nurse got a single cent.

Senators are now paid over 68k, plus generous expenses, plus whatever committees they are appointed to.
TDs now receive €98,189 plus expenses.

No money for nurses, saviours of the nation through the pandemic.

Ministers of State receive €134,976 + expenses. We know now who cares about nurses.

Nobody in Fianna Fáil, Fine Gael, or the Greens, that’s for sure.

At a time of unprecedented cost facing this country, the cost of our politicians is hard to justify. No wonder people are very angry.

They think of lines such as “we’re all in this together”!

By comparison, in New Zealand “Jacinda Ardern (PM) and ministers voluntarily take pay cut in solidarity with those hit by Covid-19”.

For now we must all be responsible for ourselves

People have become used to Covid-19, which causes a certain nonchalance, leading people to forget now and then.

We see for ourselves how many are being declared infected daily.

The health service is coming under pressure.

One could talk about our third world standards, which are the result of scandalous decisions, but this is not the time for that.
For now we must all be responsible for ourselves.

We can influence the misguided thinking of youth, and older by reminding them that this virus is alive and well, living amongst us.