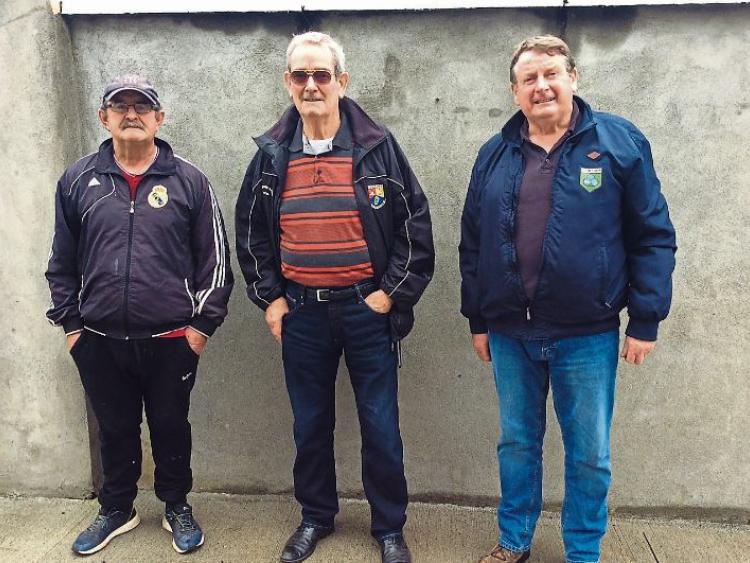 Joe Kiernan, Seamus Flynn and Liam Connerton: “It was nice, I thought, that people could genuinely feel so positive after all that time”

We always got the cheque on a Thursday, emphasised Joe ‘Luigi’ Kiernan when I met him and two colleagues in Lanesboro on Friday last.

Not sure where he got such an exotic nickname, maybe he really is a foreigner….

In 1934 the establishment of the Turf Development Board under the de Valera government of the day was invoked.

Many changes happened since then, so I decided to visit Lanesboro and meet a few who worked in Bord na Móna when it was active.

The triumvirate of Joe Kiernan, Liam Connerton, and Seamus Flynn, all in living colour, were happy to share information about Lanesboro, from the early forties right up to this day.

In truth, all had good things to say about their employers, and were anxious to represent how happy they were in those good times, now nearing finalisation.

Liam’s working position is officially finishing on December 31. He said, “I’ve been lucky to work with them forty years; they’ve always been a good employer, and I worked in all four stations over the years.”

He’ll regret the closure, but accepts it as inevitable, with the water situation, and other factors, they had to close.

“Maybe if the Shannon had been drained as regularly promised, it would have helped,” he quipped.

Liam explains that “the power station began its operations in 1958, with an initial capacity of 20MW. In the mid sixties a 40 MW started, then in 1983 the third station started and that was a 45MW”.

In those days Harry McGann was the manager.

Lanesboro was always a busy town, and when Bord na Móna made the decision to have a station there it was good news. That was a time when the state took housing seriously, and they started in Lanesboro with a lovely development called The Green. Sixty four houses were built, with one acting as a library.

The housing was designed by Frank Gibney, who became one of Ireland’s most respected architects.
He designed many such places for Bord na Móna.

People from all over Ireland were tempted by the package, which included the housing, and other perks, at a time when Ireland wasn’t easy to survive in.

Later more houses were built, 70 in Clontuskert on the Strokestown Road, and another 25 in Derrahaun.

The houses came fully equipped with Stanley ranges, etc., and everything that was needed to keep workers happy.
Bord na Móna also had their own health insurance, and really did look after their staff very well.
Pensions too, featured in the attraction to entice people to the midlands.

Seamus Flynn explained, “Every county bar one (Tyrone) had people living in Lanesboro. They came from all corners of Ireland.”

Lanesboro, which was already a good town, became a thriving community. In any case Lanesboro people are by nature very inventive and creative, constantly seeking new ways to do things. This is exemplified by some of the current new businesses which are still doing very well.

Most of these are now gone, but Lanesboro is still a bustling good town.

Turf was being cut and sold from the late forties, but that was done by hand, and sold in sacks.

At its peak in the 1980s and 1990s, the new station had a generating capacity of 100 MW, and was considered to be the most cost effective and efficient peat fired electricity generating station in Ireland.

“1962 I came to it,” says Seamus Flynn, the oldest man in the company, looking extremely fit. “January ‘62, a nice month to be starting outdoors and I started fairly low down I can tell you.”

“By the time I started,” Seamus says, “You could work on the bog in someone else’s name, as the younger children couldn’t get cards so they were named after parents/ You could do that, in those times.”

Joe Kiernan, interjected saying, “Seamus became a foreman, and in his time one of his comrades was the famous Bertie Allen.” Bertie’s name is well known.

Seamus tells how people “moved into the houses in 1952. They were preparing the bogs for the upcoming development.” But turf was being sold locally at that time.

I asked if there was anything they wanted to add.

It was easy to see how memories were being recalled in the company and information came hard and fast. Almost wistfully, I might add.

Seamus: “One of the houses on The Green operated as a library” and “PJ McGloughlin from Longford was the builder of the houses on The Green. There was interfirms football, as good as any county championship, Cyril Dunne & Seamus Leyden (Galway) played on one team. Then we had the ESB playing for two years. After that it was dropped, I think it’s because we won both years it was dropped,” he chuckles with faintest derision!

Joe says “the town got a great boost from the bog community.”

Liam: “Families were so big we were all out footing turf.”
When memories come flooding back, I could tell that fond times were being recalled by all three, gazing into eternity.
Liam looking out the window, “There could be up to thirty.....or indeed more...playing football on The Green back then.”
At this stage I was transfixed by all the memories that the three gentlemen had of their great times, when working for Bord na Móna.

It was nice, I thought, that people could genuinely feel so positive after all that time.