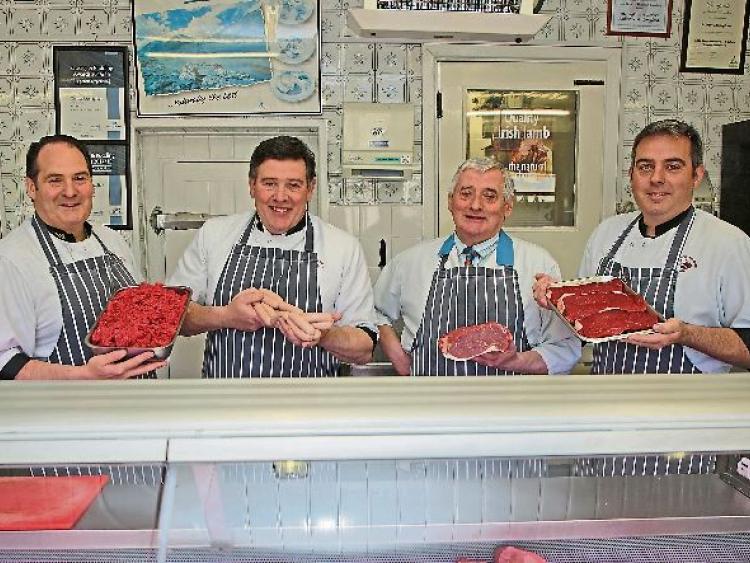 Chris, Martin, Christy and Oliver Monaghan behind the counter of Monaghan's Butchers, Longford town in a week which saw the highly respected and popular butchers mark its 40th year in business

This week marked forty years not out for Monaghan’s Butchers - arguably one of the midlands’ leading meat specialists and delivery exponents.

Headed by its proprietor and founder Christy Monaghan, this pioneering and award winning establishment continues to go from strength to strength more than four decades later.

Backed up by wife Esther and sons Martin, Chris and Oliver, Monaghan’s offers an unrivalled array of high quality meats, all of which are sourced from reputable local suppliers and at the most affordable of prices.

It’s that ceaseless drive for excellence which has seen the business amass a large and steadfast customer base.

From the likes of Tony Callaghan aka Sgt Matt Boyden of ITV series The Bill, Ian Beale (Adam Woodyatt) and Sharon (Letitia Dean) as well as Coronation Street’s Reg Holdsworth (Ken Morley) and Curly Watts (Kevin Kennedy) to more familiar local faces and long term friends such as former councillor Tony Carberry, this progressive and dynamic enterprise has not looked back since its grand opening on June 20, 1980.

From the very finest in select cuts of beef, lamb, bacon and pork, you name it Monaghan’s Butchers has it.

“It’s all about the customer at the end of the day,” said Christy.

That sens e of devotion to its ever expanding and devout customer base has been an approach which has enabled to the business to not just survive but conform to an ever evolving marketplace.

The scrupulousness and all round sense of attention to detail is evident as soon as you walk through its doors.

Nothing is left to chance, a mantra which remains at the very pinnacle of its continuity and four decade existence within Longford's meat sector.

“All of our produce is freshly prepared and of the highest quality and when people do come in they know they are going to be attended to by an experienced family member.”

It’s a facet of the business Christy and his sons have remained steadfast to throughout and is a trait which you get the feeling will continue to hold sway as it looks forward to many more years at the apex of Longford’s butchery industry. “We have had some craic and enjoyment serving our customers and those who are sadly now deceased over the years,” added Christy.

The importance placed on those who have supported the business over the years is certainly not lost on Christy or the Monaghan family, an attitude which was also borne out by the firm's enduring mantra for Longford consumers and the wider community to stay as well as shop locally.

“Without them we wouldn’t be here and have been able to have had the success we have had.”

You get the feeling, given Monaghan’s durability and incessant appetite for perfection it’s a sentiment that is more than mutually shared.