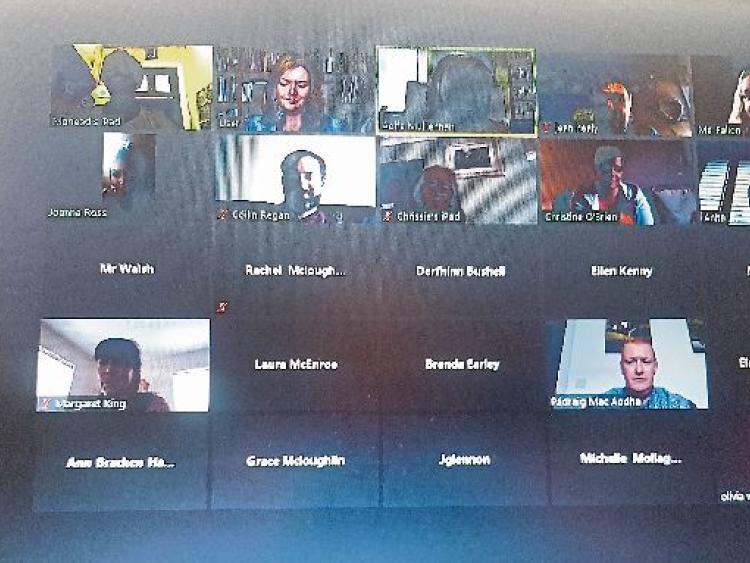 The final LC assembly at Meán Scoil Mhuire via ZOOM

The Graduation Liturgy of the class of 2020 began on May 21 in St Mel’s Cathedral with a moving rendition of “I Watched the Sunrise” by Ms Ross. Fr Michael McGrath opened the liturgy by welcoming the Sixth Year students to the cathedral.

The theme of the liturgy, as selected by the students, was “Sunset. Sunrise” and Fr McGrath reflected on the order of the words in the chosen theme and the unwavering optimism that the order exhibited.

Thus, began a graduation celebration like none ever witnessed in Méan Scoil Mhuire’s history of over 150 years.

The silence of vacant seats and empty pews echoed throughout the moving ceremony. Yet, the students were there shining brightly in spirit, their incredible contributions to our school community present in every word spoken and every song sung.

Ms Lyons, Deputy Principal, completed the final roll call on the parish webcam calling the students’ names in alphabetical order, by baseroom, for the last time.

He commended the students for their efforts, their diligence and their exceptional work while acknowledging their bitter disappointment with the manner that the year had ended.

Finally, Mrs Mulrennan addressed and thanked the virtual audience for their attendance. She expressed her gratitude to the “wonderful RE Department” and Fr Michael, for their unwavering determination to ensure that the graduation liturgy proceeded.

She spoke of the loss of the “rites of passage” but also asked the students to entertain the possibility that this was an opportunity to show their strength and resilience; “You have been an inspiration to us all. Your kindness, compassion and enduring friendships have shone through”. Thus, the sun set on the class of 2020. It was a sunset like no other.

The school community would like to extend our sincere gratitude to all those who contributed to the preparation of the liturgy and to those who attended virtually.

The final assembly and awards ceremony for Leaving Certificate students took place on May 25 at 4pm via Zoom. Despite the unconventional forum, the tension was nonetheless palpable as students awaited the announcement of the coveted Student Girl of the Year.

Not to be deterred by the minor obstacle of school closures the process of selection transitioned to Microsoft Forms. Mr MacAodha, Sixth Year Year-head, was eager to point out that the competition this year was fierce and the number of candidates outstanding.

There was great excitement and virtual clapping when Mr Mac Aodha announced the 2020 Student of the Year as Jane Gleeson.

Congratulations to Jane and all the shortlisted students on this wonderful achievement.

Congratulations to Rachel Mc Loughlin who received the CEIST award which is bestowed on the student who embodies the spirit of the CEIST ethos. Ms Hardiman announced the Senior Sports Girl of the Year award.

She praised the sporting prowess of the Sixth Year students and explained the difficulty involved in coming to the final determination. The students shortlisted were Holly Carrig Cassidy, Emily Reilly and Kara Shannon.

Congratulations to Kara Shannon who was selected as Senior Sports Girl of the Year. Virtual Certificates were also awarded to Senior Prefects, students with perfect attendance (one student who had not missed a single day of second-level) and members of the student council.

In a final assembly like no other teachers were conscious of the impossibility of saying goodbye as normal and thus the assembly concluded with a heartfelt emotional sixteen minute video of teachers bidding farewell and adieu to the class of 2020.

May 25 marked a busy day in the life of Méan Scoil Mhuire as virtual final assemblies were held for all First Year, Second Year, Third Year, Transition Year and Fifth Year students.

Virtual clapping abounded on ZOOM throughout the day as our students’ achievements were recognised and their contribution to school life acknowledged. Congratulations to all students who attended and participated in these assemblies and an especial congratulations to those students in receipt of awards.

2nd Year Awards: Congratulations to Maria Ganley who received the Endeavour Award and to Alex Lee who was awarded Student of the Year.

Summer Holidays
We would like to wish our school community a restful summer break. Stay safe.