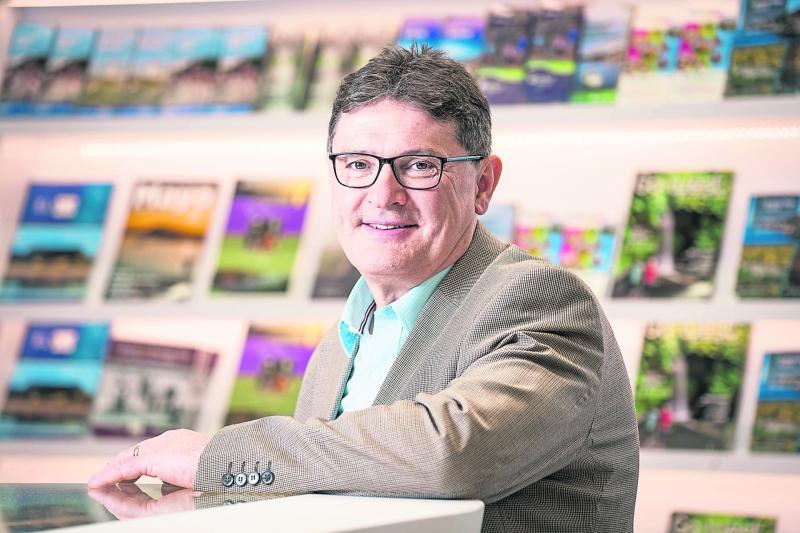 Over 800,000 passengers used Ireland West Airport in 2019 making it a record year for the airport which officially opened its doors in 1986.

Passenger numbers increased by 5 percent on the previous year, 2018. It marked the fourth consecutive year of passenger growth at the award winning airport.

The CEO of Ireland West Airport, Joe Gilmore, said that 2019 was a positive year adding that a number of significant developments have been made at the Mayo-based airport.

Planning certainty for the future

In September, Mayo County Council approved proposals for a new Strategic Development Zone (SDZ) at Ireland West Airport.
When fully completed, the proposed development will provide over 95,000 square metres of commercial, business and enterprise space, along with additional facilities for aviation development, conferences and hotel accommodation.

Mr Gilmore said: “There is planning certainty within the land bank now for commercial industrial development.”
Mr Gilmore said that the zoning in parallel with the Atlantic Economic Corridor, (AEC), should reap positive dividends for the airport.

Mr Gilmore added that due to the fact that the airport is located around halfway on the corridor ensures the airport will reap the benefits of improved road networks and infrastructural developments.

Ireland West Airport has a catchment area of around one million people. The catchment area spans from Donegal, Leitrim to Galway and across to Longford. The area includes between 10 to 11 counties.

Mr Gilmore said that Ireland West Airport is the closest airport to Center Parcs which boasts 100 activities and 400 acres of forest to explore.

The majority of visitors come from the UK with 85 percent of those visiting hailing from Scotland, Wales and England.

Mr Gilmore said that the UK continues to be the ‘core market’ and despite the economic concerns in relation to Brexit - the airport saw an increase of 2 percent in UK traffic.

Within that 20 percent increase is a new service to Cologne, Germany which is proving very popular: “That service worked well for the first season and that helped in increasing the mainland European passenger numbers. We are very pleased with the year from a passenger point of view,” he said.

In 2019, more than 25 tourism trade from across the west and north west joined the airport, Ryanair, Tourism Ireland and Fáilte Ireland in Cologne to promote the new Ryanair flight to Cologne from Ireland West Airport for St Patrick’s weekend.
The airport has 20 international destinations.

Mr Gilmore said he hoped that a deal could be forged, in relation to Brexit, that would not have a negative impact on business, travel and industry.

“We haven’t seen an impact, I suppose when you look at Brexit there hasn’t been any direct economic downturn,” he said.

Last year, a number of major capital projects were completed at Ireland West Airport - the largest being an overlay of the main 2.5km runway. In line with this work, the instrument landing and lighting systems were also upgraded, as were the taxi-ways.

“The runway was laid in 1985 and was due a significant upgrade and maintenance.

“The total cost of that project was €11.3m. Airports are from an infrastructural point of view similar to motorways, ports or rail networks.

They are infrastructure and they are maintenance capital heavy,” he said.

It is envisaged that similar type works will not need to be carried out for around two decades.

“In addition to that we spent about another €3.5m on other capital projects,” he said.

The main part of these projects being a major security upgrade on hold baggage screening which cost close to €2m. All airports in Ireland must undertake the same works in adherence with departmental and European legislation.

“In total last year we spent about €15m on capital projects and we funded that through grant aid from the government of 75 percent and the remainder was funded by the airport,” the CEO said.

It was announced last year, that a subsidiary of Ryanair called Lauda would fly to Palma, Majorca from Ireland West Airport twice a week.

Passengers can fly to and from the popular holiday destination from March 31 straight through to October. Prior to this the airport facilitated a weekly charter flight for around 10 weeks of the year to Majorca so the new development is a welcome one which is certain to prove favourable with visitors and tourists.

The closure by Ryanair of their bases in the Canary Islands and the continued grounding of the 737 800 Max aircraft has resulted in the loss of the airport’s long-standing and successful services to both Lanzarote and Tenerife for 2020.

The airport is continuing to engage with Ryanair and other airline carriers regarding the return of these services and are confident they will resume in 2021.

Flights to Liverpool and Bristol have reaped positive results for the airport:

“We have also had added capacity on other services like Liverpool and Bristol,” Mr Gilmore added.

Fundraising at the airport

Charity events at the airport have resulted in €150,000 being raised over the course of the last four years.

Last year, €41,000 was raised for three deserving charities, the Jack and Jill foundation, Croí and a local charity ‘Hope House’.
The landmark event is the funrun on the runway which will take place on Saturday, March 28, 2020.

The airport was also nominated and won the National Chambers’ Award for being the first airport in Ireland to become an age friendly airport.

The process involved the airport being audited certain changes being made in terms of ease of use and signage. Staff were also trained in relation to the initiative.

The future certainly looks bright for the award winning airport which continues to build on passenger numbers year on year.