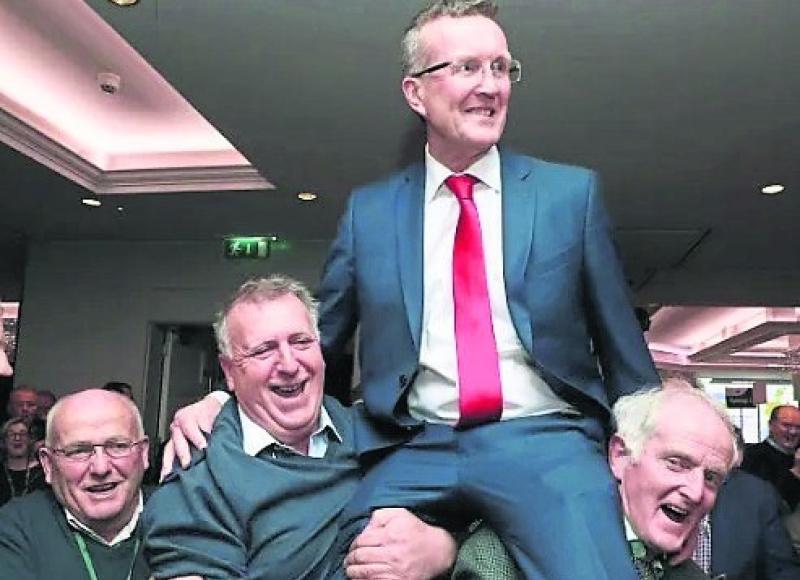 Tim Cullinan is held aloft by supporters after his election Picture: IFA

Tim Cullinan, a farmer from Toomevara in Co Tipperary has been elected the 16th president of the Irish Farmers’ Association (IFA).

Tim, who has been involved with the organisation for 15 years, will take up officially take up office at the Annual General Meeting on Monday, January 27, 2020, after beating John Coughlan and Angus Woods to the role.

The Tipperary based farmer claimed 8,334 votes in the first count, with John Coughlan in second with 7,402 and Angus Woods in third with 7,149.

Mr Cullinan then claimed the coveted position on the second count with 11,497 votes at the National count in Castleknock Hotel, Dublin, on Tuesday, December 17.

The Minister for Agriculture Food & Marine, Michael Creed T.D.,extended his congratulations to Tim Cullinan on his election as President of the Irish Farmers Association.

Commenting on the result the Minister said, “Congratulations to the President-elect and his team on a successful Campaign.

“I look forward to working constructively with the incoming IFA leadership to address the many challenges facing Irish farmers. I would also like to pay tribute to John Coughlan and Angus Woods for their efforts in such a close contest.”

In the race for Deputy president, Brian Rush overcame the challenge of Thomas Cooney by a slender margin. Following a full recount of votes, Rushe was elected with 11,349 votes to Thomas Cooney’s 11,345.

Meanwhile, Harold Kingston was elected Munster Regional Chairman, following a full recount. He was elected on the second count with 1,985 votes to 1,919 votes for Pat O’Driscoll.

A new treasurer will be elected at the AGM on January 27th to succeed Tim Cullinan, who will take on his new position as president.

In Longford, Angus Woods came out on top of the polls. Out of 294 votes in the county, Mr Woods received the highest portion of votes - 168.

This compares to eventual winner Tim Cullinan, who received the second highest portion of votes with 108 in total. John Coughlan received the least of the three, with eighteen votes in total.

Christmas in Kenagh: There’s no turkey like a Doyle turkey