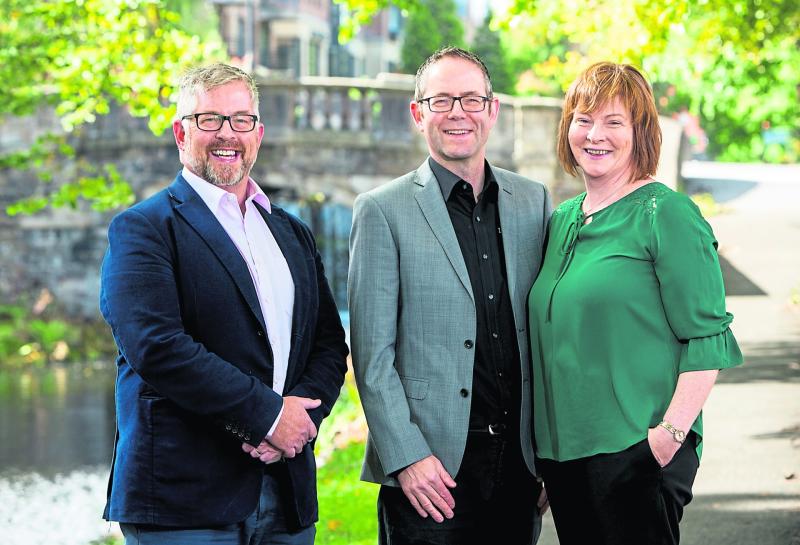 It’s been an incredible year for Lough Ree Distillery, which has been moving forward at a speed that will give its three founders, Peter and Michael Clancy and their sister Sheila Mullen plenty to toast this Christmas.

And they’ll have a choice of spirits with which to have that toast as, since launching its unique Sling Shot Gin in Lanesboro just over a year ago, Lough Ree Distillery has launched an award-winning vodka and a high quality single grain Irish Whiskey.

In August 2018, the Lanesboro-based micro distillery made headlines when it became the first licensed distillery in the region for over 175 years. The trio’s passion for innovation is reflected in the use of local peat as a botanical in Sling Shot, a world first for any distillery.

As Michael Clancy, the technical guru behind the company’s products explained – “Peat is synonymous with Whiskies, particularly Scotch, but with those the malted barley is dried using peat smoke, so the peat isn’t actually distilled as part of the product. We’re the first to actually distil it. It’s common in the wine industry for people to refer to the concept of Terroir , meaning the soil and environment the vines are grown in. Really using peat in Sling Shot is the very essence of Terroir – its reflective of the locality we’re from, and something we’re proud of and passionate about.“

It’s worked quite well for them too – Sling Shot has been very well received in the market for its unique flavour profile, a fact reflected in the 8 major international awards Sling Shot has garnered over the last year. “The awards are really significant in terms of validating the quality of your product in the external market. Ours have come from a wide variety of judging panels in the US, UK & Europe”, explained Peter. “Awards really help when you’re talking to distributors in foreign markets, as it enables them to benchmark your product against the competition. A personal favourite was closer to home – Sling Shot won the award for the Best New Drink product at Taste of Cavan in August which we were thrilled with “.

If this unique and well-received gin is an opening product for Lough Ree Distillery, then it comes as no surprise that the distillery’s second product, Zesty Citrus Vodka, which was launched in October, won Best Irish Vodka at the Irish Whiskey Awards 2019...a mere week after it was launched.

Zesty is the first product to be released as part of the company’s “Founders Series”. Michael elaborated – “Bringing products to market is a time consuming and expensive business, particularly on the bottling and packaging side.

And yet, as an actual distillery, as opposed to many others who are just brands, we have the ability to distil a wide range of products.

We’ve created the Founders Series to allow us to quickly bring small batch products to market and gauge the traction before we embark on major investments in packaging, branding and marketing. Zesty is the first of these, products, although we have a few more in the pipeline for 2020.

The reaction to Zesty has been terrific, and winning the Best Irish Vodka was entirely unexpected, although we were pretty confident that the product was superb. It gives us a great platform now to exploit this product further, and already we have export orders for it to start in January “.

If gin and vodka aren’t your thing, then the local distillery’s most recent product will certainly tickle your tastebuds.

Eager to appeal to a wide market in Ireland and abroad, Lough Ree Distillery has, in the last few weeks, launched its exclusive series of Whiskey, under “The Bridge” label. Sheila explained the significance of the name – “What you have to realise, is that until about 6 years ago, there was only 3 distilleries operating in Ireland. While there have been quite a few additions since, the earlier ones of those are just now releasing their first Whiskies.

And so any brand, apart from the original 3, with a Whiskey release of older than 5 years, has in effect bought Whiskey stock wholesale from one of the original 3, then finished it themselves in different casks, and marketed it under their own label.

What we’re doing here is similar to that, with the exception however that we’re being fully upfront and transparent in saying that we were not the original distillers of the product, but have added value in terms of finishing the Whiskey for several years in our own specially sourced casks.

“The Bridge series is designed to allow us to gradually release some of our wholesale Whiskey stock, but only when it’s good enough. There’s a symbolism there with Lanesborough’s 1,000 year old bridge and the notion that this series is a bridge to when we’ll have our own Whiskey, distilled in Lanesborough in several years time. Whiskey is a long term business – it takes 3 years from when you put the spirit in a cask until you can legally call it Whiskey .”

“We released it at Whiskey Live about 2 weeks ago “, commented Peter “and because it’s a Single Cask, there’s only 400 bottles or so available. It’s pretty much sold out at this stage such has been the demand, so much so that we’ve had to accelerate our plans for our second release under the series – An Dara. That’s an 8 year old single grain also, but finished this time in an Oloroso Sherry Cask, and we’re bottling that this week. It’s a smaller cask so we’ll only have about 200 bottles to start with, and in reality with pre orders, and some commitments to foreign distributors, there will be only about 100 bottles released in Ireland. We fully expect to be out of stock of An Dara also before Christmas”

“These are expensive premium whiskeys, not the type to be making hot whiskey’s out of .” joked Peter, “ but the market demand is very encouraging, and particularly in the context of the long term home for our Brand across the road. We’ve made significant progress on that also in the course of the year, for sure we’re frustrated slightly that it hasn’t gone as quickly as we’d hoped, but these are complex projects, and it’s a long term business. I’ve first hand knowledge of several similar projects in the sector in Ireland, and every single one has taken a lot longer than the promoters originally envisaged. We’re years ahead of some of the other players to be honest.

“In parallel to everything else, we’ve been working really hard to build our Brand over the year, exhibiting at events like Bloom, the Ploughing, Gin Experience, Whiskey Live and many smaller tasting events locally and in off licenses and bars. We’ve also put huge effort into developing the export side of the business and expect positive results from that in 2020 ” Peter Clancy explained to the Longford Leader.

“Our whole vision is 'To bring to the world, from our hometown of Lanesborough, the finest, most highly regarded Irish Spirits' Everything we’ve done in the last 15 months has been with that in mind, and whatever awards and other forms of assistance we get along the way, that help us towards achieving that end goal, we’ll gladly accept them all. There are opportunities everywhere you just have to keep an open mind and be willing to be innovative and flexible. That’s one of the benefits of being a small business “

One of those opportunities this year was the recent opening of Sling Shot Gin School in Dublin. Based in Churchtown Stores in Dublin 14, the school gives gin-lovers the opportunity to learn how to make their own gin over the course of three hours. This is the perfect learning experience for singles, couples or groups and, best of all, you get your own bottle of gin to bring home at the end of it all.
Coming into Christmas, Lough Ree Distillery has a number of gift ideas perfect for the gin, vodka or whiskey lover in your life. These can be viewed on www.lrd.ie/gifts/