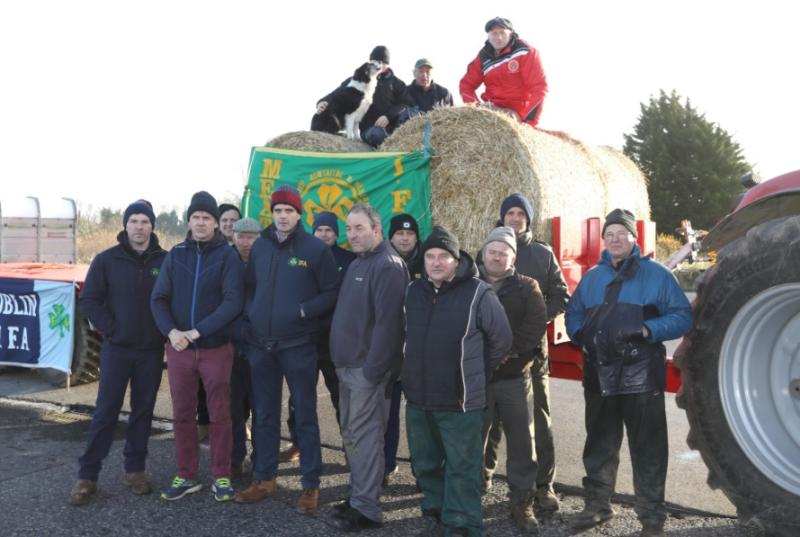 The IFA began protesting on Thursday, December 5, at the Aldi distribution centre in Naas, Co Kildare, demanding a significant and immediate beef price increase to bring the Irish prices in line with the Bord Bia European Export Benchmark Price Index.

He said, “The supply chain is delivering mega profits for factories and retailers at the expense of farmers. We can have all the reviews we like, but farmers need a price increase now.

"Before any talks last August, we insisted that the retailers had to be present, but they refused to take part. They have a dominant role in a dysfunctional food chain and they have to be held to account.”

With Irish beef prices currently 20c/kg or €80 per animal behind the Bord Bia price tracker, and 50c/kg or €180 behind the UK price, Mr Healy says the delay in price increases is a 'tactic'. Mr Healy said the IFA will continue to take action until processors give a significant price increase.

Following the blockade, Aldi Ireland issued a statement expressing their disappointment at the actions of the IFA and protests outside their regional distribution center in Naas, the site of the first blockade.

A statement reads, "We welcomed the resumption of the Beef Taskforce this week and have engaged positively with farmer representative organisations on the beef issue over recent months. Aldi has a policy of open communications with all of its stakeholders, including the IFA.

"To be very clear, Aldi received no request for engagement on this issue from any member of the IFA leadership, no communication about specific concerns about the mechanics of the beef market, including age specification, and no warning of any grievance the IFA had before this morning."

Aldi state that they are 'fully committed' to cooperating with the Beef Taskforce and say they have even met with one of the representative groups, the Beef Plan Movement (BPM), as recently as last week to further update their position.

"As part of our preparations for the Taskforce, we have initiated research on a wide range of beef products to determine a number of issues. Our work also includes a complete review of procedures and processes with our suppliers to ensure we are meeting all customer and market requirements.

"Aldi is a proud supporter of Irish beef and all of our fresh meat, including our beef is 100% Irish and Bord Bia Assured. This is a cornerstone of our commitment to our customer. We remain committed to reporting back through the Taskforce and playing a fulsome role in the process. Any action outside of this process is short-sighted and not constructive.”

After ending protests outside of the Aldi distribution center on Thursday, approximately 50 IFA members took the blockade to the Lidl distribution centre at Charleville on Friday, December 6.

It was reported during protests on Friday that ABP Group, which is owned by tycoon Larry Goodman, would raise prices by a reported 5cents by this week.

ABP then issued a statement on Friday, criticising the IFA for hosting what they dubbed ‘illegal blockades’.

A spokesperson for ABP said, “The company is at a complete loss to understand why Joe Healy, the outgoing IFA President, pursued a course of irresponsible, disruptive and illegal action at retail distribution centres this week.

“The Beef Task Force met on Tuesday and Joe Healy and the IFA were fully aware that market indications pointed towards a cattle price increase in Ireland. This was reported extensively.

"Joe Healy is also aware that cattle prices are quoted on a Friday and the timing of this stunt was motivated by competition for membership between traditional and new farm organisations.

"The price paid by ABP for cattle will always be determined by the prevailing market conditions and those conditions have recently improved. ABP can confirm, as was indicated on Tuesday at the Beef Task Force, that it will increase the base price of cattle for deliveries from next Monday. The actions, this week, of Joe Healy, the outgoing IFA president, were needless and irresponsible.”

The protests did not end there either, as members of the IFA took blockades to the distribution centre of a third major retailer - Tesco Ireland, hosting a blockade at Tesco’s distribution center in Donabate, Co Dublin on Monday, December 9.

The IFA say they will continue with this line of action until a substantial price increase is introduced. They continued with blockades on Wednesday, December 11, at the depot of Dunne Stores in Cornelscourt, Dublin.

Blockade at goods depot at @dunnesstores in Cornelscourt in Dublin. Discounting of food by retailers has a negative impact on beef farmers' incomes. pic.twitter.com/MxfWlqYkI2